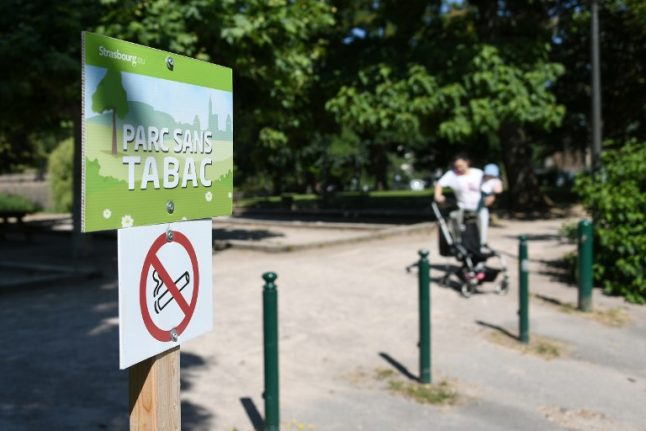 No smoking signs have gone up in Strasbourg's parks. Photo: AFP

Anyone lighting up in the city’s green spaces will face a fine of 68 euros, but the fines won’t start to be imposed until next year to give people time to adjust to the new measures.

The decision to ban cigarettes from parks was voted in by the eastern city’s council at a meeting on Monday night, with 42 councillors voting for it and not one voting against.

The new rules, which were drawn up by city authorities in collaboration with the Ligue contre le cancer (Anti-cancer League), will initially apply to the six biggest parks in Strasbourg before being rolled out in all of the city’s parks.

After the initial phase, the city will in 2019 start to hand out the 68-euro fines to anyone caught lighting up. Strasbourg is the first city in France to ban smoking in its parks. Photo: AFP

“If we want a generation of non-smokers, we will have to prevent tobacco from being seen by children,” councillor Feltz said.

“With 27 percent of French people smoking, we are not trying to stigmatise smokers but trying to get tobacco out of public spaces,” he said.

Strasbourg has a strong track record in the fight against smoking. In May 2015 it banned smoking from children’s playgrounds, months before the measure became French law and was applied throughout the country.

Anti-smoking measures appear to be working in France, which recorded a drop of one million smokers in 2017.

The government says this is largely due to its decision to raise the price of tobacco. Smoking substitutes such as vaping have also contributed to the decline.

READ ALSO: Study – And the best city in France for foreigners to live in is?