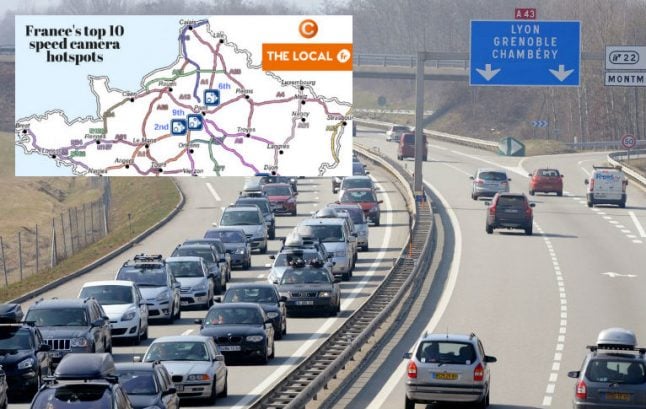 Time to tighten your belt, not just your seatbelt. Photo : Deposit Photos/The Local

France has one of the most advanced motorways systems in the world, with over 11, 882 kilometres of autoroute tarmac connecting every corner of l’Héxagone.

But as the network grows so does the price of road travel.

Tolls were bumped up in early 2018, pricy fuel-cosuming traffic jams are still a daily occurrence for many drivers in France and last but not least the French government is allowing the speed camera network to expand and become privatised, a penalty system that brought in €1billion to the country’s public coffers in 2017.

With so many added costs to watch out for while driving, catching a plane or train may seem like a more carefree option for some, that’s if they completely forget about the air and rail strikes that can plague French travellers.

So rather than letting your car gather dust in the garage, we suggest you go read through this detailed feature to get clued up on the most expensive road tolls to avoid, the time-consuming traffic hotspots to stay well clear of and the trigger-happy speed traps to watch out for.

Scroll down for information on tolls, traffic jams and speed cameras. The ten most expensive motorway sections in France

With more than 76 percent of its highway network consisting of toll roads, paying a péage or two is kind of inevitable.

Then again, if you’re driving by yourself from Paris to Nice, which means having to cough up €77 in tolls alone (see more below), you may want to reconsider your travel plans.

French current affairs website L’Internaute have put together this very insightful list of the ten most expensive tolls on French motorways based on 2017 prices. If you don’t mind spending a bit more time on smaller roads, you could save a pretty penny.

France’s first city motorway is also by far its most expensive for drivers. Despite only being 15.6 kilometres long, commuters travelling from the Parisian business district of La Défense to Orgeval in the Yvelines department can expect to cough up an eye watering €8,30 during peak hours (6am to 10am and 4pm to 9pm on weekdays, same flat fee on weekends).

If it’s any consolation the price drops to €6,10 during holiday periods.

This 140-kilometre motorway has been one of France’s priciest since it opened in late 2010. Also known as the Gascogne motorway, it connects Bordeaux and the department of Gironde to Pau in Pyrénées-Atlantiques.

Low traffic levels have led the highway company behind the A65 to bump up prices to a steep €22,60 for the full journey, making it southern France’s most expensive motorway.

Taking Paris’s super-péripherique, shaped like a 79km loop around Paris, will set you back as much as €12.50 on Fridays and on the eve of public of holidays between 6 and 7pm.

If you’re looking to save some cash, keep in mind that prices fluctuate enormously depending on the time, with the cheapest time to hit the road being from midnight to 6am, for €1,50.

This highway connecting Sens in the department of Yonne (just outside Ile-de-France and Paris) to Artenay in Loiret can cost as much as €20 to cross its 130 kilometres of tarmac. Low traffic numbers are held to blame for the price hike.

READ ALSO: What you need to know about driving on France's autoroutes

Most things Swiss are far from cheap, so it may come as no surprise that taking the A41 from Grenoble in the Auvergne-Rhône-Alpes region to Geneva in French-speaking Switzerland can cost as much as €18,40 for 122 kilometres of motorway.

If you’re driving to Italy from Lyon, this is one of your options to get you to the border. The A43 connects the capital of France’s Auvergne-Rhône-Alpes region with Modane, where the Frejus road tunnel takes you through the Cottian Alps to the Italian town of Bardonecchia. Bear in mind that this 185-kilometre route will cost you €23.80.

If you’ve skied in the Alps before you may be familiar with the A40, the so-called Autoroute Blanche (White Motorway) that connects Macon en Saone et Loire to Saint-Gervain-les Bains in the department of Haute Savoie.

Costing six times as much to build as a regular highway due to the challenging topography of the area, this may explain why tolls stand at €22 to drive the A40’s 202 kilometres.

The highway that connects Paris to Nantes in upper Brittany is France’s eighth most expensive. Starting at Ponthévrard in the Ile-de-France department of Yvelines and passing through Les Mans and Angers, the 343 kilometre route works out at €36.60 for the whole journey.

La Provençale as it is known takes you from Codoux close to Aix-en-Provence in the Bouche-du-Rhone department through to the border with neighbouring Italy, ending at the French Riviera town of Menton.

Toll prices on the A8 have gradually increased over the past three years and will no doubt carry on rising, perhaps to pay for the building of a new €60 million tunnel through to Italy. It currently costs €23,40 to complete La Provençale’s 224 kilometres.

This motorway linking Libourne in Gironde to Balbigny in the Loire will eventually connect Bordeaux to Lyon. For now, the toll price for this 486-kilometre highway running from southwestern France to the central eastern part of l’Héxagone will set you back €51,50. The distance may be great but the price is exorbitant and likely to increase. What are the motorway tolls for some of the most common road routes in France?

Using a toll calculator provided by the French Motorway Companies Association, we’ve put together a list of péage prices for motorway trips from the French capital to other major cities as well as other routes

If you want to calculate how much you’ll pay in tolls on your next road trip in France, click here.

What about traffic jams on French motorways?
A 2016 study by global traffic think tank Indrix found that out of the 100 worst traffic hotspots in Europe, 14 were in France.
The A1 motorway, which connects Paris to the northern city of Lille, was the worst traffic hotspot in France in terms of the economic cost of congestion, resulting in €609 million in losses.
According to the report there were 252 traffic jams over the course of one year on the so-called Autoroute du Nord, with the average time spent stuck in traffic for travellers being 109 minutes.
It was followed by the A86, Paris’s superpéripherique ring road motorway, which came in 12th in the overall European rankings, with 95 traffic jams lasting on average an hour and a half.
The A7 Autoroute du Soleil, which continues onto the A6 to link Lyon to Marseille, made two appearances on INDRIX’s list, with 135 traffic jams recorded in 2016.
But it was a dual carriage ring road that had a far higher number of traffic jams than any motorway in France: Paris’s Boulevard Périphérique.
14 sections of the notoriously troublesome “périph” made the list with a hair-raising total of 1034 traffic jams in just one year.
There is limited data available on traffic jams specific to motorways from other official sources, perhaps because the last thing France’s ASFA motorway association wants to do is dissuade drivers from using some of their more cash-strapped highways.
They do however offer traffic forecast and webcam systems that allow you to live stream and check if an “embouteillage” is taking place on your planned route.
Traffic jams on French motorways are generally most common at the start and end of holiday periods, especially on highways out of Paris and other northern cities as holidaymakers flock to the sunny south in summer (especially July and August).
The French government's traffic info service Bison Futé draws up an annual calendar that gives travellers an idea of when to expect (and avoid) the usual days of most heavy traffic. Here is their 2018 traffic prediction calendar.
An earlier study by INRIX found the following times to be the best and worst for traffic congestion in France:

• Worst Traffic Day: Thursday
• Worst Week Day Morning: Tuesday
• Worst Commuting Hour: Tuesday 8:00-9:00
• Worst Afternoon Commute: Friday
• Best Week Day for Traffic: Monday
• Best Week Day Morning: Friday
• Best Week Day Commuting Hour: Monday 6:00-7:00
• Best Week Day Afternoon: Monday
SEE ALSO: These are then worst cities for traffic jams in France
Where are the speeding hotspots on French motorways?
The latest nationwide data released by the country’s Road Safety organisation points out that speed traps flashed more than 25 million times across the country in 2016, 26 percent more than in 2015.
But there are a handful stretches of French motorways which seem to attract speeding drivers, if the number of drivers snared by fixed cameras are anything to go by.
So if you don't like sharing the road with speeding drivers, many of whom are from Britain it seems, then these are the motorways to avoid.
One speed camera on the A9 near Montpellier flashed an incredible 411,352 times in 2016, achieving such dizzying scores in large part because it was moved around the area five times in one year.
The fixed speed camera with the highest flash rate was also on the A9, in the Nîmes-Béziers direction, handing out a total of 159,520 speeding tickets.
In second place is a speed radar in Briis-sous-Forges, installed on the A10 in Paris-Chartres direction, which picked up 120,750 speed infractions.
Drivers in southeastern France should watch out for a speed camera on the A8 near the Adrets de l’Estérel commune of the Var in the Aix-en-Provence – Nice direction, as it caught 116,288 out in 2016.
The rest of the speed camera hotspots are listed below. The top seven each recorded more than 100,000 speed infractions in one year.
READ ALSO: Why this road is simply the worst in France (and possibly the world)