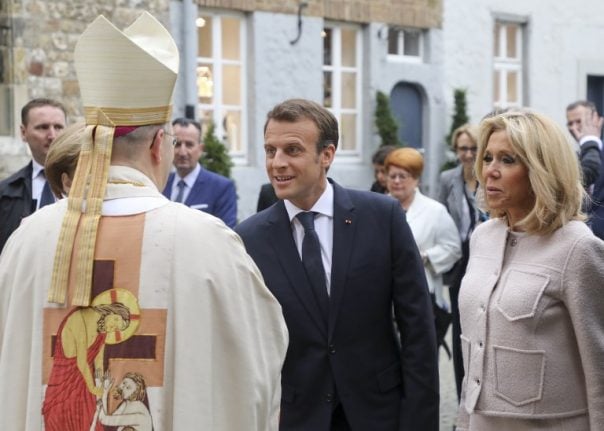 Macron with his wife Brigitte at the Cathedral of Aachen. Photo: AFP
As a schoolboy, Emmanuel Macron decided he wanted to be baptised as a Catholic, despite his parents' misgivings.
It was “the start of a mystical period that lasted for a few years,” the French president told an interviewer during campaigning in 2017.
By his mid-teens, he had distanced himself from the church, however, and he now considers himself to be agnostic.
Asked last year whether he believed in God, he gave a cryptic answer that pointed to his faith in something spiritual and immaterial, but not Catholic in form.
“I believe in a form of transcendence, that's why I thoroughly respect the role of religions in society,” he said during a chat with journalists.
Faith and the highly sensitive subject of the role of the church in French society are set to be on the menu Tuesday when Macron visits the Vatican for
the first time as leader for a meeting with Pope Francis. The Cathedral of Aachen in Germany the day Macron was awarded the Charlemagne prize. Photo: AFP
The 40-year-old centrist has decided to accept being made an honorary canon of St John Lateran, the cathedral of Rome, a tradition dating back to the 15th
century when the French state and church were indistinguishable.
Several of Macron's predecessors have declined the title, including Socialists Francois Mitterrand and Francois Hollande, in a bid to avoid associating themselves with religious imagery.
'Little priest'
France is strictly secular under a landmark 1905 law that separated the state from the church.
It remains one of the country's most debated rules and was invoked controversially in 2004 to ban religious symbols, including the Islamic headscarf, from schools.
Macron's decision to accept the honorary canon title has drawn particular scrutiny at home following comments in April in which he said he wanted to “repair” the “bond” between church and state.
One of his leftist opponents, Jean-Luc Melenchon, led criticism of the remarks, saying: “One expects a president, one gets a little priest.”
Macron's enthusiasm for the church appears to stem in part from his belief that religious leaders have a role to play in helping French society overcome a fractious period riven by economic, ethnic and social tensions.
It might also be an electoral calculation: Catholicism is still France's biggest religion and many believers worry that France is moving too far from its traditional Christian roots.
“At a time of great social fragility… I consider it my responsibility to stop the erosion of confidence among Catholics with regard to politics and politicians,” Macron told church leaders in April. French President Emmanuel Macron, delivers a speech during a meeting of the Bishops' Conference of France. Photo: AFP
Past tensions
His meeting with Pope Francis will also be an opportunity to soothe diplomatic tensions with the Vatican which emerged under the 2012-2017 presidency of Hollande, a self-described atheist.
The church campaigned against a gay marriage law passed by Hollande and then declined to accept an openly gay career diplomat as France's ambassador
to the Holy See.
Aides to Macron believe the current president and pope share a common vision of a united Europe at a time when anti-EU far-right parties are on the march across the continent.
The Argentine pontiff sent a congratulatory telegram to Macron, a former investment banker, after his election in May last year which urged him to build a “fairer and more fraternal society”.
But they hold different views on the sensitive topic of migration, with Macron repeatedly stating that France “cannot welcome all of the world's misery” and insisting that economic migrants should be expelled.
Pope Francis insists in his sermons that rich countries must do more to welcome the poor and desperate.
“I don't think the pope will offer platitudes on the issue of migrants,” Matthieu Rouge, a well-connected bishop in the town of Nanterre west of Paris,
told AFP.
Another potential area of disagreement is Macron's backing for fertility treatment to be extended to all women, including gay couples and women not in
relationships.
The move is opposed by Catholic groups in France, which see it as undermining traditional family values because it will lead to children growing up without fathers.
Macron is expected to invite Pope Francis to visit France, as Hollande did in vain, but the pontiff is not expected to make the trip a priority in the short-term.
By AFP's Adam PLOWRIGHT 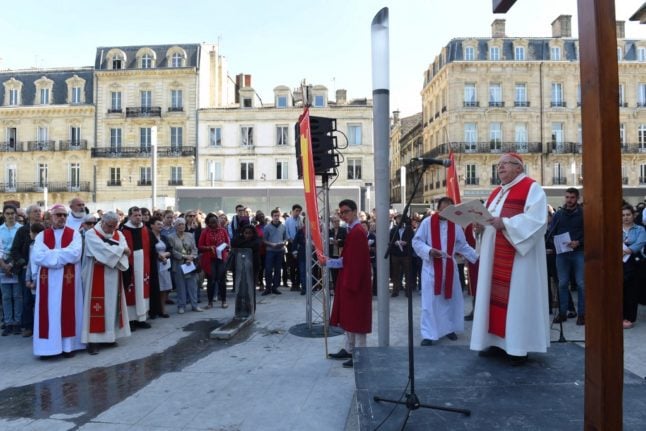