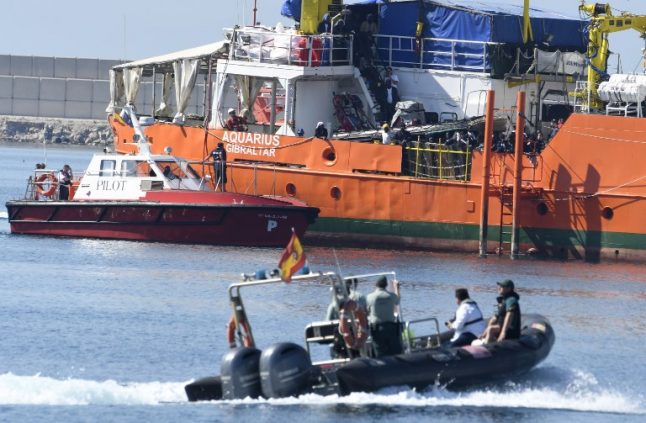 Photo: AFP
Sixteen of the EU's 28 leaders held emergency talks in Brussels to find a way forward despite a longstanding deadlock over who should take in migrants and refugees who land in Italy and other European countries.
Hundreds of people fleeing conflict and persecution at home are caught in the midst of a worsening row over how to deal with the influx against a backdrop of mass drownings in the Mediterranean in recent years.
Italy, a country on the frontline of the crisis, has turned away rescue vessels, with its new populist government demanding greater solidarity from reluctant fellow EU states.
One boat, the Lifeline, remained in limbo on Sunday with 239 Africans aboard, including pregnant women and children, with Malta and Italy refusing to take it in, after the Aquarius suffered a similar fate until it was allowed to dock in Spain. Photo: AFP
Italy's far-right Interior Minister Matteo Salvini bluntly told foreign charities on Sunday to stop rescuing migrants off Libya, where one group said 1,000 people were on boats in distress.
He accused them of abetting people smugglers.
But the German operators of the Lifeline hit out at Salvini for referring to its passengers as a consignment of “human flesh”.
“Dear Matteo Salvini, we have no meat on board, but humans,” it said in a statement.
The plight of the stranded migrants lent a sense of urgency to the meeting in Brussels, which was riven with divisions and snubbed by countries taking a hardline on the issue.
French President Emmanuel Macron and German Chancellor Angela Merkel vowed to forge ahead with like-minded leaders on ways to reduce migrant flows and share responsibility for those who land on Europe's shores.
Merkel, who is scrambling to prevent a mutiny in her government over migration, admitted there were still “some differences” but also “a great deal of common ground”.
Limited deals
Macron pointed to the sharp drop in Mediterranean crossings since 2015 as proof that the crisis is now mainly “political”, fuelled by the rise of anti-immigration populists.
Italy has accused him of “arrogance” and placed the responsibility for saving migrants in the Mediterranean squarely at the feet of Libya, much of which is lawless.
Officials warn that a new surge of migrants could trigger the collapse of free travel within the EU, its signature achievement.
“Our top priority, if we want to save free movement within the Schengen area, is to ensure real, strict controls of the EU's external borders,” Belgian Prime Minister Charles Michel said. Photo: AFP
Sunday's meeting paves the way for a full EU summit on Thursday and Friday.
Merkel however downplayed the likelihood of “an overall solution to the migration problem”, suggesting “bilateral or trilateral agreements for mutual benefit” instead.
Macron urged a European solution, “whether that is cooperation among 28 or among several countries that decide to move forward together”.
Hungary, Poland, the Czech Republic and Slovakia, which have refused to take in refugees from overstretched countries such as Italy and Greece, boycotted the Brussels meeting.
Macron has infuriated Italy by accusing it of “irresponsibility” for turning away migrant vessels and denouncing the “leprosy” of rising populism.
Italy has in turn accused France of hypocrisy, noting that Paris keeps pushing migrants back across their shared border.
Under the EU's so-called Dublin rules, asylum-seekers must be processed in the country where they first arrive, usually Italy, Greece and Spain.
EU leaders last December had set the end of June as a deadline to establish a permanent mechanism to distribute asylum-seekers throughout the bloc — but an agreement has proved elusive.
Europe's 'refugee camp'
France and Spain have called for asylum-seekers to be kept in closed centres until their claims are processed — a proposal that Rome fears would turn Italy into “a refugee camp for all of Europe”.
The issue has raised tensions in Germany, where Merkel is trying to placate a coalition ally opposed to taking in more migrants.
Her hardline Interior Minister Horst Seehofer has given her until the end of June to find a European deal to curb new arrivals.
If that fails, he has vowed to order border police to turn back migrants, which means many will likely have to return to Italy. Rescue operation by Medecins Sans Frontieres in 2015. Photo: AFP
In a counter-proposal, Italy on Sunday called for migrant “protection centres” to be set up in several EU countries to relieve overcrowding in its facilities and also demanded more aid for African countries that fight human trafficking.
EU leaders also discussed measures to strengthen the external borders — an issue on which there is consensus — and roposals for centres in countries outside the bloc to separate genuine war refugees from economic migrants.
Cooperation deals with Turkey and Libya have sharply cut the flow of migrants to Europe since a 2015 peak of over one million.
By AFP's Lachlan CARMICHAEL and Clare BYRNE