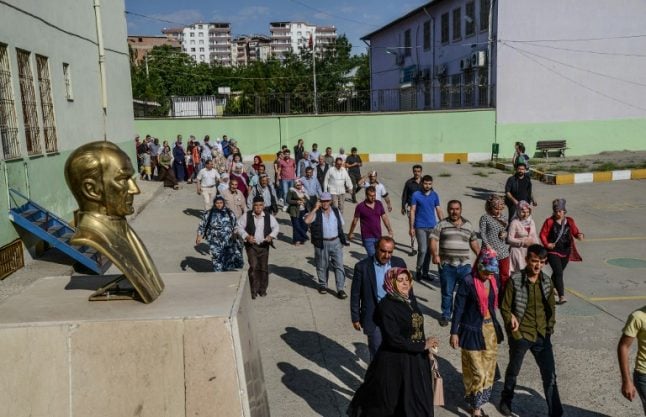 People arrive at a polling station to vote in snap twin Turkish presidential and parliamentary elections in the Kurdish stronghold of Diyarbakir on Sunday. Photo: ILYAS AKENGIN / AFP
“Turkish authorities want to snuff out any criticism of the massive fraud underway,” a Communist Party statement said, adding that senator Christine Prunaud was among those detained.
The state-run Turkish news agency Anadolu reported Sunday that around 10 Europeans faced legal action including three French citizens, three Germans and four Italians allegedly for acting as election observers without accreditation in the mainly Kurdish southeast.
Turkey's main opposition party, the Republican People's Party (CHP), expressed alarm over the number of complaints of voting violations in the southeast.
Turks are voting in twin legislative and parliamentary elections which are seen as the toughest test President Recep Tayyip Erdogan has undergone at the ballot box.
Tens of thousands of Turkish citizens are responding to calls from the opposition to monitor the polls for a clean election and a delegation of observers from the Organization for Security and Cooperation in Europe (OSCE) is also in place.