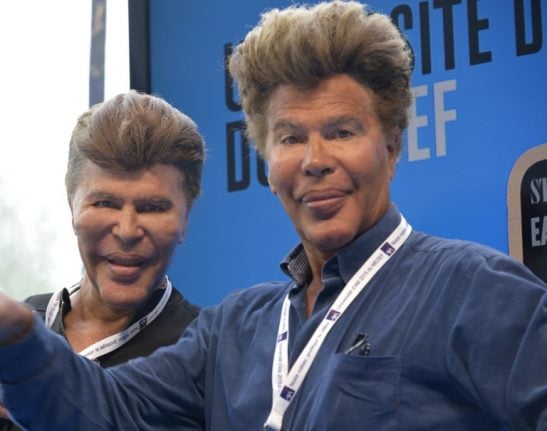 Igor (R) and Grichka Bogdanoff (L). Photo: AFP
The Bogdanoff twins, 72, died within a week of each other from Covid, after both reportedly refusing the vaccine.
Who were the Bogdanoff twins?
The fraternal twins were once considered French television heart-throbs and were massively popular during the 1980s.
As presenters and producers, they have been the brains behind — and faces of — various television shows covering both science and science fiction, after developing an interest in astronomy as children.
Although they were once known for their good looks, the brothers, now 68, are now barely recognisable after each undergoing a several plastic surgery procedures.

Legal troubles
The brothers were placed under formal investigation for scamming “a vulnerable person” out of €800,000 in 2018.
Igor was previously fined €1,500 for bursting into the home of his ex-girlfriend — model and biology student, 23-year-old Julie Jardon.
Grichka Bogdanoff came out in defense of his twin at time, explaining in an interview with Closer magazine that his brother has a passionate temperament. Julie Jardon and Igor Bogdanoff Photo: AFP
“He is sometimes too intense when switching from love to friendship. He is a passionate character and sometimes it results in fiery behaviour.”
The twins have been involved in several controversies during their years in the spotlight.
The most notable of these, the “Bogdanoff affair” alleged that the brothers wrote nonsensical advanced physics papers that were then published in reputable scientific journals. Photo: Maksim/Wikicommons
The papers, which were alleged by their authors to culminate in a proposed theory for describing what occurred at the Big Bang, were accused of contributing nothing to the study of physics.
Plastic surgery
In 2010 it was reported that the pair were each understood to have a number of chin and cheek implants, as well as botox and fillers.
As a result they have regularly been called “freakish” and described as “cat people” by the media. Igor (R) and Grichka Bogdanoff (L). Photo: AFP
Royal connections
The pair have ties with some of Europe’s old noble families.
Their grandmother who raised them was a member of the noble Kolowrat family of Bohemia who sent shock waves through European high society by getting pregnant by their grandfather — the African American tenor Roland Hayes while she was married to another man.
On top of that, Igor was married to both Countess Ludmilla d’Oultremont and Amélie de Bourbon de Parme, the daughter of Prince Michel of Bourbon-Parma.
Death
Grichka Bogdanoff died of Covid-19 in late December 2021, while his brother Igor passed away just six days later from the same illness – they were 72 years old.
Neither had been vaccinated against Covid, apparently believing that their ‘lifestyle’ would protect them.
Their friend Luc Ferry told Le Parisien newspaper that he had urged both of them to get vaccinated “countless times” but they refused on the basis that they were “very sporty, without a gram of fat”.

“Grichka, like Igor, wasn’t an anti-vaxxer. He was anti-vax for himself,” Ferry said, confirming that both of them had contracted Covid.