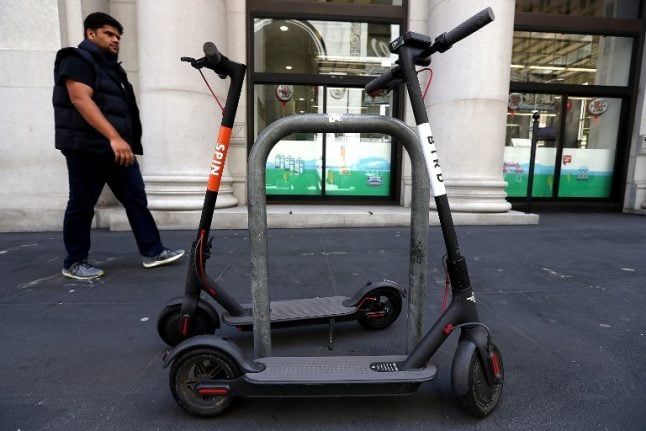 After bikes, electric cars and mopeds, Paris is about to introduce a new electric scooter sharing scheme.

On June 22,  several hundred electric scooters will be deployed around the city's streets.

The vehicles can go up to 25km/h and have batteries that allow for up to 50km of travel before needing to be recharged.

Unlike the Velib' bicycles the scooters will have no docks.

Users will be able to rent them through an app on their smart phone for 1 euro and then 15 cents per minute.

To start off with, the scooters will be in the 1st and 6th arrondissement, although users will be able to leave them anywhere in the capital, the US company Lime which runs the scheme explained.

The vehicles will be retrieved every night for their batteries to be charged and for repair if necessary in time for the following morning. Each scooter will have a GPS tracker fitted to ward off thieves.

“It's the transport solution that was missing in Paris”, Arthur-Louis Jacquier, the head of Lime France, told Le Point. But it's a tough world out there. The city's other shared transport schemes are both in turmoil.

The bike-share scheme Velib' is in dissaray and most of its bikes have been pulled off the streets since a botched handover to a new contractor last year.

The electric car share AutoLib' is set to end in days because it is loosing too much money.

And the dockless bike schemes scrapped the schemes a few months ago because of rampant vandalism.

It has not been all plain sailing for Lime's scooters either. The company recently pulled out its vehicles from San Francisco because it did not have the proper permit to operate.

This is not the first scooter-share scheme in France.

In 2017, the French start-up Knot deployed scooters in the Paris suburbs of Montrouge and Saint-Denis, and this month, the town of Colmar in Eastern France introduced electric scooters around its train station.