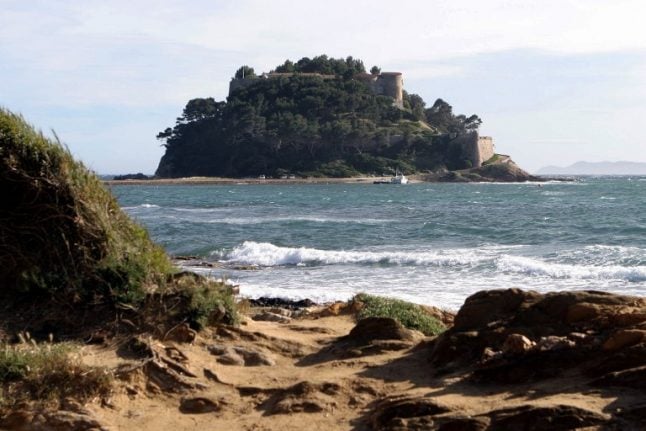 Fort de Brégançon Photo: AFP
Macron certainly doesn't seem too concerned about shaking off his image as a “president of the rich”.
The presidential couple have commissioned a study into the construction of an above-ground swimming pool at the fort, located on small island off the French Mediterranean coast in the Var department.
The study will look into the rules governing building at the site, which is classified as a historical monument, as well as technical and financial issues.
The presidential couple are hoping the pool can be built in a way that will protect their privacy against the prying eyes of the paparazzi and holidaymakers on the nearby beach. The view of Fort de Brégançon from the beach. Photo: AFP
So far, the cost of this work has not yet been determined but the Elysee has reported that the initial figures quoted are “reasonable”, with the total cost of this development to be included in the €150,000 that the palace puts aside each year for the maintenance of Fort de Brégançon.
It seems, according to initial reports that the Macrons would prefer to construct an above-ground pool “because it is impossible to dig a pool” at the fort. Former French President Nicolas Sarkozy (R) accompanied by his wife Carla Bruni-Sarkozy (L) in a golf cart at the Fort de Bregancon. Photo: AFP
And if the plans go ahead, it could be ready as early as this year's summer holiday however they first have to be given the greenlight by the architects responsible for national buildings.
Fort de Brégançon has been the presidential holiday resort since Charles de Gaulle first stayed there in the 1960s.
Macron, who has announced that he and his wife will follow in the footsteps of his predecessors and holiday at the fort during his presidency, has already requested some refurbishments and maintenance work to be carried out at the resort, according to a book on the history of the fort by Guillaume Daret.
The presidential palace recently attracted attention for splashing the cash after announcing it had ordered 1,200 new porcelain plates for state dinners to replace sets which were 'showing signs of wear'.
READ ALSO: