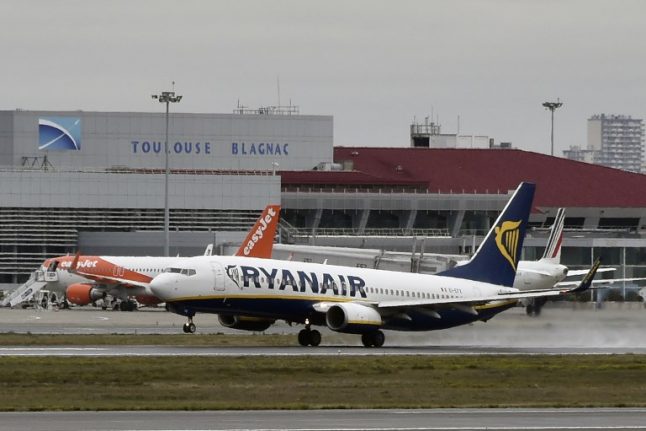 Photo: AFP
Budget carrier Ryanair and British Airways owner IAG want the EU to force France to do more to tackle repeated strikes by air traffic controllers which have led to more than 750,000 passengers having flights cancelled since the start of this year.
But the European Commission, the bloc's powerful executive arm, defended workers' “fundamental right” to go on strike and said they hoped “non-binding and non-legislative” guidelines would solve the problem.
“The commission is not questioning the right to strike, which is a fundamental right of workers,” spokesman Enrico Brivio told reporters.
READ ALSO: Photo: AFP
“The commission cannot and will not adopt any measures regulating or limiting the right to strike.”
IAG chief executive Willie Walsh said Wednesday he believed the French government was failing to uphold passengers' right to free movement, which is enshrined in EU law, by not tackling the repeated strikes.
A French senate report this week said the country's air traffic control was responsible for a third of all aviation delays in Europe, according to Le Parisien newspaper.
Between 2004 and 2016, French air traffic controllers were on strike for 254 days, vastly outstripping their closest rival Greece, where there were 46 days of stoppages and Italy with 37, according to the report seen by the daily.
Ryanair chief executive Michael O'Leary said 2018 was on course to be the worst year ever for controller strikes, with 28 days lost already.
The vast majority of passengers hit by delays and cancellations due to the French strikes are not flying to or from France but travelling on routes which pass through the country's air space.
“The commission has proposed non-binding and non-legislative best practices,” Brivio said.
The measures include early notification of strike action and protection of overflights.
O'Leary warned of fresh disruption for travellers this weekend with Ryanair asked to cancel 180 flights on Saturday and Sunday because of another strike by Marseille controllers.
The Marseille control zone is a particular problem because it covers part of the western Mediterranean that many flights from Barcelona and the Balearic Islands — major tourist destinations — pass through.