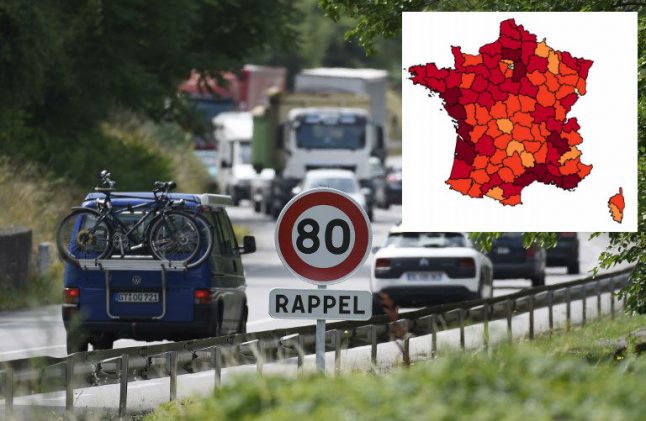 Photo: AFP
On July 1st the speed limit on secondary roads across France will be cut from 90km/h to 80km/h in the hope of reducing the number of deaths on these roads.
A new report which aims to add weight to the move, which has angered motorist groups, has revealed where in France these two-lane secondary roads (those without a central reservation) have the highest mortality rates.
The report, released on Tuesday by France's observatory of road safety ONISR, looked at road deaths between 2012 and 2016 on the country's two-lane roads outside of urban areas, in other words in the countryside.
Out of 9,579 deaths on the roads 762 were on routes nationales, so the main roads after motorways, 8,221 were on route departementales, so secondary roads, and 596 were on smaller countryside roads.
To put road deaths on French countryside roads and highways in France in a more European context some 2,175 people were killed in 2015 on roads outside urban areas in France compared to 1,997 in Germany, 971 in Spain, 1,621 in Italy and 1,022 in the UK.
To add further context 298 people died on French autoroutes in 2015, compared to 414 on the German autobahns, 277 on Spanish autopistas, 305 on the autostradas in Italy and 111 on motorways in the UK.
And where are the most dangerous two-lane roads in France, according to mortality rates?
The study shows that the 30 departments in France with the highest proportion of road deaths are largely in rural areas.
The map and table below show the departments in France which have the highest number of deaths on two-lane roads in the countryside between 2012 and 2016.
Bouches du Rhone in the south, Gironde in the west, and the department of Herault in the south east top the chart.
In some case, such as Bouches du Rhone and Gironde, these are some of the most-populated departments in France outside the urban Paris area so it's fairly logical the number of road deaths would be higher. The stats above are represented in the map below. The study noted that the rate of deaths on two-lane secondary roads in Brittany was lower thanks in part to its system of dual carriageways.
The report also concluded that the secondary roads people might consider the safest — ones with high visibility and smooth asphalt — can actually be the most dangerous when it comes to accidents.
That conclusion is used to respond to the critics of the government's decision to drop the speed limit.
Opponents have been asking that the government make an exception for the “best roads” and allow the speed limit to remain at 90 km/h for those not considered dangerous.
This would include some of the major rural roads in which communities have often invested thousands of euros in order to increase safety, such as by correcting dangerous turns and cutting back trees to clear the view. Bikers protest against the change to the speed limit. Photo: AFP
But the results of the new report back up the government's decision, showing that it is often the two-lane countryside roads, most often the “routes départementales” that are the most dangerous.
According to the report, 20 percent of these so-called good quality two-lane roads account for a staggering 55 percent of the deaths on two-lane roads in France.
But why is this the case?
“On the one hand it's because they have more traffic,” Emmanuel Barbe, a government road safety delegate told the French press.
“On the other hand, and paradoxically, it's because of the feeling of security which means some drivers allow themselves to increase their speed.”
Road mortality in France
France has a sorry record for the number of fatal accidents that occur on its roads, with the death toll in 2016 reaching 3,469.
The possible law change comes at a time when road mortality has been on the rise since 2014 — the longest period of sustained increase since 1972.
And it is on the two-way roads outside urban areas, mostly with speed limits of 90 km/h where 55 percent of fatal accidents took place in 2016.
In 2017 there was the tragic case of a British father and his baby who were killed in a road crash during their holiday in Brittany, northwestern France.
The “excessive or unsuitable” speed was involved in a third (32 percent) of the fatal accidents, according to a report by France Info.
The Local has previously reported that France's road mortality rate increased in 2015 for the second year in a row, something the country hadn't seen for 35 years.
The former interior minister, Bernard Cazeneuve, said previously that one of the primary reasons for the higher toll was an increase in road traffic but also drivers taking risks.
“The rise also reflects an increase in risky behaviour that can lead to serious accident fatalities,” he said.
The former minister also said French drivers were “too relaxed” when it came to following the road rules, and that many motorists continued to drive “at excessive speed”.
A study in April 2015 from BVA found that 75 percent of French people acknowledged that they don't always stick to the speed limit.