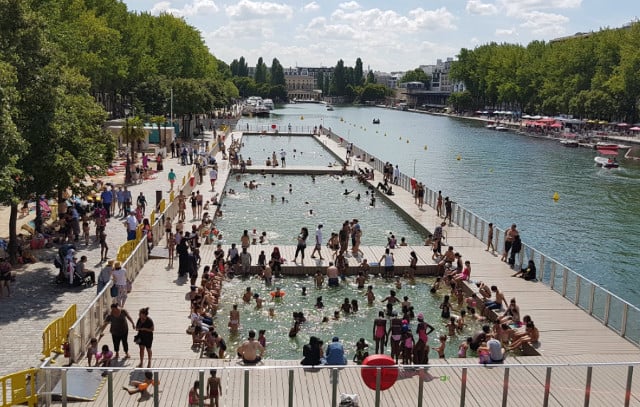 La Baignade, the new swimming pool at the Bassin de la Villette in north eastern Paris is open and ready for sunseekers and swimmers, if the weather holds up.

Paris Mayor Anne Hidalgo opened the open air swimming pools in north eastern Paris on Wednesday, although unlike The Local's editor she wasn't game enough to take a dip.

The pool is free and open from 11am to 9pm each day throughout the summer until September 9th.

Can't believe I was told to take a shower before jumping in the canal in Paris. Didn't see anyone else get sent back. Gutted. Water is great. A bit murky but no need to shower after. La Baignade is open for summer! pic.twitter.com/iqiY0NYOPI

La Baignade was judged a big success when it was first tested in the summer of 2017 and drew over 50,000 swimmers and young kids who spent hours splashing around in the paddling pool.

Thankfully the water has been judged clean enough and will be tested each day. Last year the pool had to be closed on the odd occasion when the water was judged not be clean enough.

The rules are slightly more relaxed than in other swimming pools in France with hats and tight trunks not obligatory.

This year two pools have been set aside for infants, one pool has a depth of a 1.2 metres and the main 40-metre long pool is two metres deep.

There are changing rooms, showers, which believe it or not must be taken before jumping in the canal water (or perhaps that was just our editor who was told to do so), and a team of life guards to keep an eye on everyone.

La Baignade is part of Paris Plages beach festival which will open at the Bassin de la Villette and the right bank of the River Seine on July 7th.

As for the water on the first day?

“Lovely,” says McPartland. “It's chilly at first, but very refreshing. And the water I accidentally drank when I jumped in tasted fine,” he said.

“So far, there's none of the algae that made swimming a little uncomfortable last summer.” (see tweet below)

A break from work to jump in the new pool at the canal. Lovely temperature. Not sure about all the green stuff at the bottom though. pic.twitter.com/MV1Ogq7rsn So it's certainly worth a plunge, but be warned: the hotter the day, the more crowded it will be although the opening day this year was far quieter than last year.

TRAVEL
‘IT problems’ blamed for cancellation of flights from French airports
Url copied to clipboard!