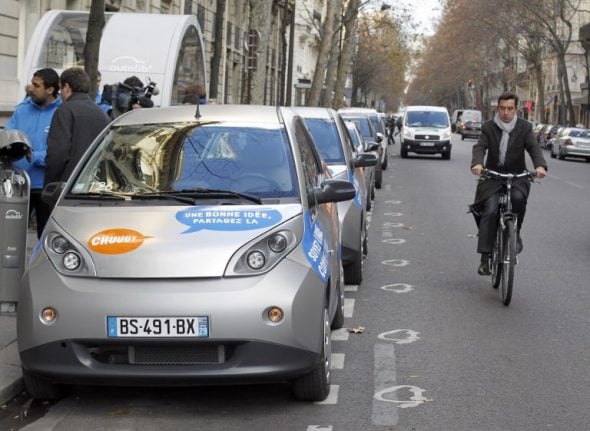 Photo: AFP
The Autolib electric car-sharing service was meant to revolutionize transport in the city when it was unveiled in 2011, but it looks set to close in a matter of days.
The elected representatives of the SAVM union (Autolib' Velib' Métropole), responsible for monitoring the public car-sharing scheme entrusted to Bolloré, have asked for the service to come to an early end. The final decision will be left to a vote on Thursday.
The current Autolib contract wasn't due to run out until 2023.
But now the French capital's signature grey fleet of electric cars have just a few more days to roam the city, before they are unplugged.
“It can stop as soon as we receive the notification, Thursday or Monday at the latest,” said Marie Bolloré, who runs Blue Solutions, a subsidiary of the Bolloré group, which runs Autolib.
READ ALSO: Bolloré told Europe 1 radio the decision to terminate the contract as “absurd”, claiming that the company found out about it from the French press, not from the SAVM union itself.
The reason behind the shutdown of the scheme is that Autolib which was originally supposed to make a profit of €56 million by 2023 is actually in tens of millions of euros of debt.
And while in 2016, the number of Autolib subscribers had continued to grow and reached a peak of 110,000, by the end of 2017 that number fell to 102,000 subscribers.
Bolloré puts the financial failure of the service down to the “changing mobility patterns of Parisians”.
“There have been changes in urban mobility: there was the arrival of minicabs (VTC) which was a very strong competition, there were fewer commuter trips between Paris and the suburbs, which would have increased rental time,” she said. “We have to find a balanced financial system”.
But another explanation for the drop in subscribers lies in the state of the self-service cars which can sometimes be found dirty, damaged and increasingly used by homeless people to sleep in.
The Autolib are often “in a rather pitiful state, because they are poorly maintained by the users”, said Louvet and the customers “are disappointed by more and more dirty vehicles.”
“They are full of cigarettes, lighters, bottles, bags with rubbish. People take drugs in the cars.” François, an Autolib employee in Paris told France Info.
One Paris resident told The Local how he and neighbours successfully persuaded authorities to close their local Autolib station.
“We were sick and tired of the vehicles becoming a temporary home for  drug addicts of all kinds , vagrants and toxico-tourists  that roam the night in search of a place .
“There were piles of junk food , discarded bottles , cigarette butts , and yes ….. used condoms all over the pavement – this is not what you want to step across as you take the kids to school in the morning.
“Loud techno music would boom from several bluecars as you would walk away from Gare de l’est late in the evening , the interiors lit up , and the vehicule itself rocking from side to side.”
If the car-sharing scheme contract continued until 2023 as planned, it is believed it could have racked up a whopping €300 million of debt.
To pay off the current debt which Bollore says sat at around 210 million euros at the end of 2017, the company wants the Paris authorities and the authorities of the suburbs involved in the scheme to contribute the bulk of the money.
Unsurprisingly this has led to much antagonism between the two parties.
And while the local authorities involved might be up in arms, according to the original contract Bolloré says it is only required to cover the costs of losses of up to €60 million. Beyond that, Paris and the municipalities of Ile-de-France must pay.
Despite the debt crisis hanging over the service and the ongoing disagreement between the two parties, Marie Bolloré still hopes to convince the local authorities not to let the wheels come off Autolib altogether.
“We are asking for action, we can innovate in many different ways on car-sharing, so we are calling on the SAVM union to help us find more solutions or to find a financial agreement that would mean less costs for the municipalities,” she said.
“If we pay up to €60 million, as the contract stipulates, that still leaves €150 million,” she said. “On top of that there will be the added cost of terminating subcontracting deals which is estimated at around ten million euros.”
“We will be closer to €300 million of debt than the tens of millions described by the SAVM. I repeat, the decision seems totally absurd,” she said. Photo: AFP
Marie Bolloré insists things are not quite over yet.
“We will wait until we receive the notification of the cancellation.”
“During the days that remain, the goal is to prove that the termination would be a bad decision, both financially for the taxpayers, and that the stop would be brutal for the users and for the employees who, from one day to the next, would find themselves without work,” she added.
The service, which eventually saw 4,000, battery-powered cars stationed at over 1,100 self-service docking stations across the city and the surrounding suburbs, worked in the same way as the bike sharing scheme Velib'.
Users would sign up for a subscription and pay a small fee each time they use the car depending on how long they used it for and naturally it was intended that they would be a source of profit for the city and Bolloré when they were introduced.