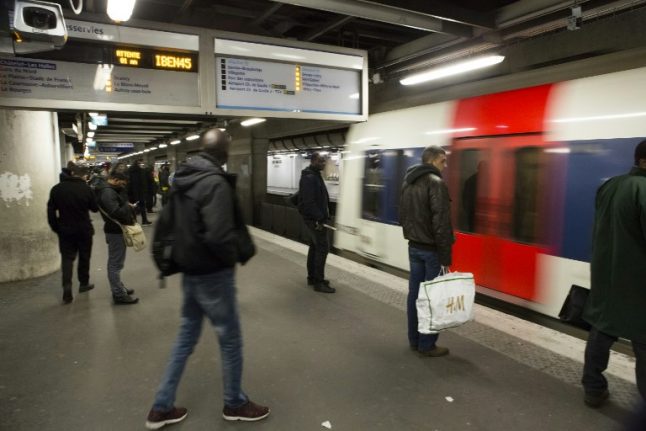 Illustration photo: RER/AFP
Rail passengers on the busiest train line in Europe experienced delays on Monday morning — no, not because of the strikes, but because a woman was giving birth to her baby boy in the middle of a train.
Two women, Eliane a commercial executive with four adult children who was on her way back from an English lesson, and Aurélie, helped the young mother as she gave birth on the double-decker train at Auber station.
Eliane, who comes from Val-de-Marne to the south east of Paris, was sitting on the lower level of the train described in an interview with Le Parisien how she first heard some “weak moans” coming from the level above.
“I was on the floor below when I first heard some weak moans. I thought it was children messing around. The groans started again and then again so I went upstairs to see what was happening,” she said.
READ ALSO:
“I was there with another lady, Aurélie and we found ourselves alone. All of the people who had been in that part of the train had got off at Auber,” she said.
“We saw the mother wobble. We laid her down and I just had time to take hold of the baby that was coming into my arms,” she added.
The two women asked a man who was passing by to sound the alarm and call for help and after that the three women and the baby were left alone, waiting for someone to arrive.
“The minutes seemed endless before help arrived,” Eliane said. “I could only think about putting the baby aside so he could breathe and cutting the umbilical cord. Aurélie made sure that the mother remained conscious and that the baby was not cold.”
But she went on to bemoan the reactions of the other passengers.
“What is serious was the indifference,” she said. “Nobody went to see why this lady was moaning, what was happening. And then everyone got off the train without helping her.”
“It could have ended really badly,” Eliane said.
Luckily the mother and her baby were both doing well after the unexpected birth, according to announcements by French transport authority RATP.
“We can confirm that everything is going well. Emergency services are currently on the train helping the mother,” announced the network on its Twitter feed.

The President of the Ile-de-France region, Valerie Pécresse tweeted: “All sorts of events occur on the RER, some of them happier than others! A long and happy life to the baby.”
And it looks like the newborn is already likely to be the envy of some of its fellow commuters with the network announcing that the baby would benefit from free travel until his 25th birthday.