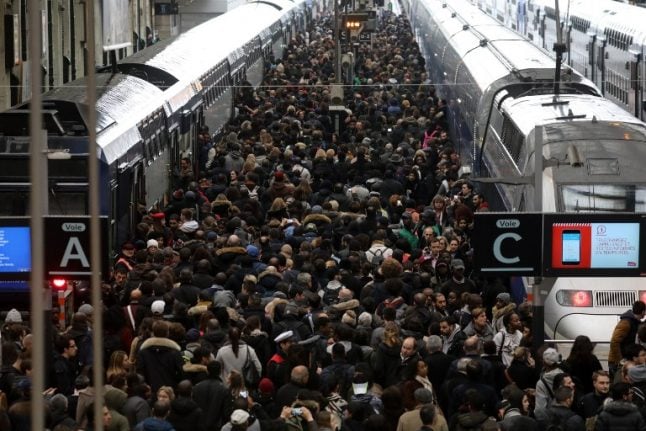 Photo: AFP
Many dream of packing it all in and moving to the 'most romantic city in the world' for a fresh start.
But Parisians can't wait to get out apparently.
A recent survey carried out by French jobs website RegionsJob showed that 59 percent of people working in the greater Paris region of Ile-de-France want to leave their jobs and move away from the French capital.
This represented the highest figure of potential deserters of anywhere in France, showing that perhaps the allure of Paris isn't strong enough to make up for a the stresses of the French capital.
So, where do they want to go?
According to the survey the places Parisians dream of living a more tranquil life are the central-western region of Auvergne-Rhone-Alpes, with 13.5 percent of Ile-de-France residents wanting to move there, the western region of Pays-de-la-Loire (10.7 percent) and the Grand Est region (10.6 percent).
READ ALSO: Which city in France do Parisians most want to move to? Lyon in the Auvergne-Rhone-Alpes region of France — one of the places Parisians dream of moving to. Photo: Michael Muraz/Flickr
“Many of them want to work in the Lyon metropolis, the second largest economic hub in France,” David Beaurepaire, the Managing Director of Regionsjob, told Le Parisien newspaper, which revealed the results.
“As a second choice, they like the neighboring regions of the Grand-Est and Hauts-de-France, or metropolises where quality of life is high like Nantes (Loire-Atlantique), Rennes (Ille-et-Vilaine) or Bordeaux (Gironde),” he added.
Beaurepaire added that while young graduates are interested in the Ile-de-France, this is not necessarily the case with those who already have jobs who are more likely to consider quality of life, transport times and the cost of real estate.
A 2017 revealed that the city most Parisians dreamed about moving to was Montpellier on the south coast.
The southern city close to the Mediterranean gained the highest combined score from seven criteria, these being climate, quality of life, environment, geographical location, culture and leisure, security and employment.
Just 8km to the beach, plenty of sunshine hours and an average rent of 595 euros, Montpellier shapes up well.
In the new RegionsJob survey the percentage of people around France wanting to move to the greater Paris region was also low.
Just 9.1 percent of respondents wanted to move to the Ile-de-France, making it sixth on the list below Auvergne-Rhone-Alpes, Nouvelle-Aquitaine, Bretagne, Pays de la Loire and Occitanie.
But while it was Parisians who were the keenest to move, according to the survey, there was a big desire generally among the French to start a new life in a different region.
In fact, one out of every two respondents said they wanted to find a job somewhere new.
—–

CLICK HERE to support The Local France
—–
“The figure seemed to us considerable!” Beaurepaire said. “In France, there is a huge desire to move.”
The study took into account the views of 5.2 million users of the Regionsjob site in the first quarter of 2018.
But while many French workers might dream of moving, according to the Center for Employment Studies, out of 100 employees who are considering moving to another region, less than 5 percent actually do it.
Nevertheless, the results of the survey match those of a similar study published in December which showed that more and more native Parisians wanted to leave the French capital.
The report by French national statistics agency Insee showed that while in 1999, 70 percent of people born in the greater Paris region of Ile-de-France still lived in the city, that figure dropped to 68 percent in 2006.
READ ALSO: