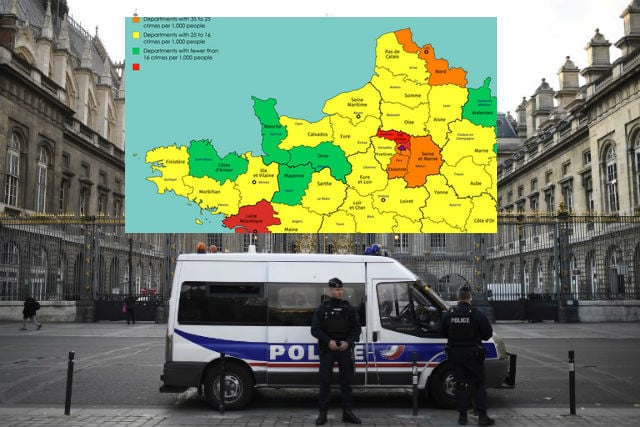 It’s been thirty years since the French government introduced public criminal mapping to its citizens.

What was once confidential information, withheld to prevent panic in the population, is now being disseminated by authorities in the hope of making people aware of the types of crimes that are affecting the areas in which they live.

As with a 2017 survey that revealed how more than half of French women had been victims of sexual harassment, the French Interior Ministry's yearly crime index publication has the potential to make society aware of other problems that need to be solved.

The Local has obtained data from France's Interior Ministry which divided crimes into two categories: firstly offences such as burglary, car theft, robbery and assault and then more serious crimes such as murder, rape and sexual assault.

First we look at the first category of crimes, pinpointing the departments of France with the highest crime rates worked out by calculating the total number of reported incidents per the population of the department.

The crimes involved armed and unarmed robbery, theft without violence, burglary, vehicle and vehicle part theft, assault and theft inside vehicles. We also include some real figures for the total number of certain crimes.

Nine out of every 100 Parisians were victims of either a robbery, assault, burglary or vehicle theft in 2017.

The French capital recorded the country’s highest rate of robberies with the use of a weapon and robberies without violence, which includes pickpocketing and bag snatching.

In real numbers, here are some figures.

READ ALSO: What to do if you're the victim of crime in France

The Ile-de-France department of Seine-Saint-Denis, which has a population of 1.57 million saw 5 in 100 people become the victims of either a robbery, burglary, violence, or vehicle theft in 2017.

The department, known by many in France just by its number 93, had the highest rate of armed robberies in metropolitan France, with 686 crimes reported. There were also nearly 11,000 violent robberies.

Seine-Saint-Denis also came in second top for the number of assault cases, and second for burglaries, with 7,873 home break-ins in in 2017.

Bouches-du-Rhône is home to France’s second biggest city Marseille and has a total population of just over 2 million.

The department saw 4.4 out every 100 people experience some form of theft, robbery or assault last year.

This is the region with the highest rate of vehicle theft and theft of vehicle parts in the whole country. Some 10,842 cars were reported stolen in the department in 2017. There were also 11,335 burglaries.

Rhône in the Auvergne-Rhône-Alpes region, where the city of Lyon lies, shared third position with Bouches-du-Rhône, as its residents experienced the exact same average of criminality.

Just as the previous department reported very high rates of cars and car parts being stolen, Rhône is a hotspot for vehicle break-ins, with some 15,953 cases, meaning its probably best to keep you doors locked at all times and not leave any valuables unattended in your vehicle.

In Haute-Garonne, where Toulouse – the capital of France’s southern Occitanie region – is located, 4.1 out of every 100 residents suffered some form of crime relating to theft or assault.

The department, with a population of 1.3 million, has a particular problem with home burglaries (see link below), recording the highest number of burglaries per number of households in 2017: 8,972 out of a total of 679,242 households.

That makes it 13 break-ins per 1,000 dwellings. Haute-Garonne is popular with foreign residents with stats given to The Local revealing that some 6,000 English speakers live there, including nearly 4,000 Brits.

READ ALSO: MAP: Where in France are you most likely to be burgled?

Also in Occitanie is the department of Hérault, on the southern Mediterrarean coast of France, which came in sixth on the crime table.

Hérault, which is home to Montpellier and has a population of 1.1 million, had a particularly high rate of theft without violence (including pickpocketing), coming in third behind Paris and Rhone with 18,816 cases.

There were also over 3,000 cars stolen in Herault last year and nearly 19,000 non-violent robberies.

On the west coast of France lies the department of Loire-Atlantique in Pays-de-la-Loire, where 3.6 out of every 100 residents reported some form of robbery or assault in 2017. A densely populated department of 1.3 million which has its capital in Nantes, Loire-Atlantique came in third for the theft of vehicle parts with 3,482 cases reported.

In the south east of the country, the department of Alpes-Maritimes, which includes cities like Nice and Cannes, came in eighth place for most crimes in these categories. Its more than one million inhabitants, including 6,000 Brits and 1,000 Americans, had a 3.5 percent chance of becoming victims of a crime.

After Paris and Seine-Saint-Denis, Val-d'Oise recorded the third highest criminality rate in the Ile-de-France area, with robberies affecting 3.4 in every 100 residents.

The top ten list is completed by its regional counterpart of Val-de-Marne, an area home to some 1.35 million residents, 3.4 percent of whom reported being victims of theft, robbery or violence last year.

There were nearly 6,000 burglaries in Val-de-Marne last year and over 5,000 vehicle thefts.

What about crime in your area? Click here or on map for a high quality map you can zoom into or download How about serious crimes in France?

France’s Interior Ministry has released separate data on murder, rape and sexual harassment in the country, looking at the average number of reported cases per year over the past three years as opposed to just 2017.

“The data published in this report at the beginning of 2018 should be considered provisional,” the report reads, “because of the complexity and the length of some investigations, some of the data may evolve in the coming months.”

With this in mind, here are the current hotspots in France for serious crimes based on the average number of reported cases per year over the last three years.

While the figures below might sound high it's worth noting that a report by France's National Crime Observatory points out that 30 percent of murders are a result of domestic disputes, 35 percent caused by altercations between people such as a brawl and 20 percent are down to the settling of scores between criminals and other crime related disputes.

Haute-Corse, the northern part of Corsica recorded an average of 8.7 murders a year over the last three years, the highest rate in metropolitan France given its population of just 172,560. The southern part of this picture-perfect island – Corse-du-Sud – came in fourth, which highlights how Corsica still has a problem with organized crime. Back in 2013, it had the highest murder rate per capita in Europe.

Second place on the grisly list is the southeastern department of Alpes-Maritimes, where the Riviera resorts of Nice and Monaco lie. The department saw an average of 48 murders per year over the last three years. The recent rape and murder of 13-year-old Angelique from Wambrechies in Nord caused a huge public outcry in the region. Photo: AFP

Paris had the third highest murder rate in France over the last three years with 88 murders per year on average, which in terms of murder numbers alone was the highest average figure.

Bouches-du-Rhône where Marseille lies, came in fourth with 56 murders per year on average, then, (somewhat surprisingly) the rural department of Creuse in central France came in fifth in terms of averages.

Every department of France witnessed at least one murder on average per year, with the departments with the lowest rates being Lozère, Ariège, Haute-Marne, Corrèze, Aveyron and Haute-Vienne.

French law defines rape as “any act of sexual penetration, whatever the type, upon a third party, through violence, threats or surprise” which is slightly different to other countries which have stricter definitions.

Paris had the highest average number and highest incidence of reported rape cases in Metropolitan France over the last three years: 759.

It’s followed by two of its Ile-de-France departmental neighbours, Yonne and Seine-Saint-Denis, where there were an average of 106 and 485 per year rape cases respectively.

Cher, a department in the Centre-Val de Loire region of France that stands out for neither low or high rates in other crime categories, recorded 90 rape cases a year on average despite its small population (310,270), putting it in fourth place. The town of Bourges in Cher. Photo: Coralnia/Flickr

The appearance of Sarthe in fifth (average 161/year), Charente (98 reported rapes per year) in the west in seventh and Eure (163/year) in Normandy in eighth place shows that rape isn’t a crime that should just be linked to densely populated urban areas.

Paris again was first for sexual assault and harassment with 1,310 reported cases on average per year.

Pas-de-Calais in northern France was second highest with 729 cases a year.

Orne, a small department of Normandy not far from Paris, was third in the rankings, with the same sexual assault and harassment rate as Pas-de-Calais, a much more densely populated area. Sexual assaults and sexual harassment on the Paris metro are on the up. Photo: AFP

An hour’s drive from Orne is Sarthe, which recorded a high number sexual harassment and assault cases that don’t seem to correspond with its small population.

Yonne in Burgundy came in sixth with 146 cases on average per year. Two other northern departments, Nord and Somme, complete the top six with 1,102 and 233 sexual assault and harassment cases respectively .

Densely populated departments of southern France such as Haute-Garonne, Alpes Maritimes and Bouches-du-Rhone do not have the highest rate, findings that clash somewhat with the rape stats for some of these areas.