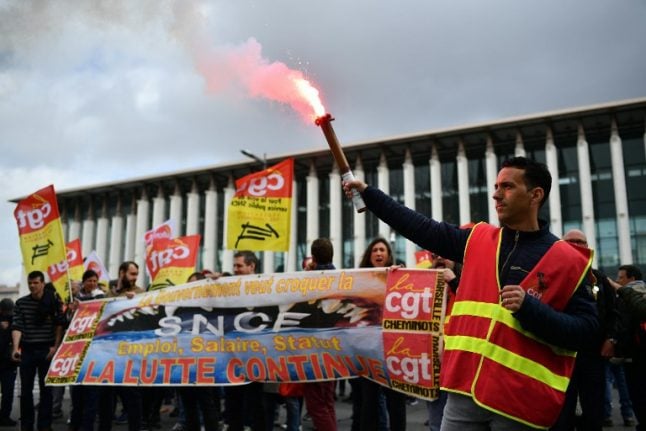 Laurent Brun, the head of CGT rail workers said: “We will continue through the month of July. For how long? We will see. It's not a question of just stopping at a certain date, so long as the government is trying to force its way through,” he said.

Those reforms were adopted by parliament this week.

The rolling rail strikes which have been held by the CGT and three other unions since early April were due to end on June 28th.

It is unclear as of yet whether the other trade unions will also decide to continue their industrial action. Brun added that his union would try to find a way of alleviating the cost of lost pay for strikers, after 30 separate days of disruption.

While the two days strikes, held every five days, have been gradually weakening over the weeks, they have still been causing disruption to rail services, especially regional TER and Intercité trains.

While the CGT is the main rail workers union, if they were to continue the strikes without the support of the other unions, the impact on services will likely be much reduced.

The problem for trade unions is that this week French senators approved the reform of the debt-laden state rail operator SNCF, handing President Emmanuel Macron a key victory in his push to reform wide swathes of France's economy.

The government pushed through the emblematic shake-up of train services despite stiff resistance from rail workers and their unions, who have carried out their longest strike in three decades in an attempt to derail the plan.

“The law has been passed definitively, and it will be applied,” Transport Minister Elisabeth Borne said after the Senate voted to pass the measure, its final legislative hurdle.

“Unions don't make the laws, parliament does. And parliament has listened extensively to the unions,” added Gerard Cornu, the senator in Macron's
Republic on the Move party who spearheaded the rail law.

“The strike no longer serves any purpose,” he said.

READ ALSO: Strike calendar in France – The days you might want to avoid travel Unions have failed to win over public opinion since the strike began in April, with workers walking off the job every two days out of five.

Just 12.8 percent of SNCF workers participated in the most recent strike on Wednesday, the lowest rate since it started, and disruptions to the country's 4.5 million daily rail passengers have eased markedly in recent weeks.

Train drivers in particular are resisting plans to deny job and pension guarantees to new recruits, as well as plans to turn the SNCF into a
joint-stock company, which they see as a first step toward privatisation.

The government however has agreed to enshrine in law its pledge not to sell the new SNCF shares being created as part of the corporate revamp, addressing a key union concern.