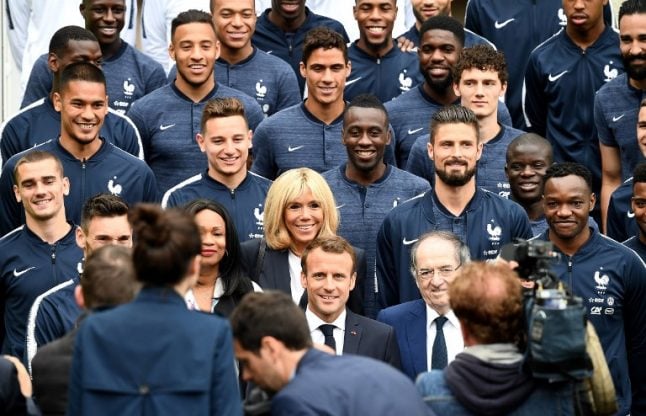 Firstly, are France actually going to win the World Cup?

No, seriously, there's a very very good chance that on the evening of Sunday July 15th, the day after Bastille Day, the French will pour onto the Avenue Champs-Elysées in their tens of thousands to celebrate the country winning the World Cup final, almost twenty years after they last won it.

That's because French coach Didier Deschamps has a real chance to do as manager what he did as captain back in Paris in 1998 and win the World Cup with his country.

And the reason why this is not the pie in the sky kind of optimism that you don't normally associate with French fans is that Deschamps has an enviable list of highly talented players at his disposal, plus Oliver Giroud (more on him later).

In fact the list of players France has left behind would have a decent chance of going far in the tournament. The likes of the Real Madrid striker Karim Benzema won't even be at the World Cup. Neither will a raft of injured players such as Arsenal's Laurent Koscielny and Marseille's Dmitri Payet and rejected stars such as Manchester United's Anthony Martial.

So we are heading for a repeat of the glorious 1998?

There's been a lot of coverage in the French press about that 1998 triumph, far more than before previous tournaments, as if the nation is expecting a repeat. It's true that while the team is missing the steel and nous of those 1998 heroes it's made up for it in sheer exciting attacking talent.

And just like 1998 the current team is a mix of “black, blanc, beurs” players (black, white and arabs), which those on the French far right are not fond of, but another victory would be a shot in the arm for multi-cultural France.

So who are the stars of the team?

The poster boy Antoine Griezmann (pictured below) is arguably the team's star player.

He has the skills and the clever football brain to go with those youthful good looks which help to convert many football-hating Parisian women into avid fans for one month only (more on them later). He was voted the sexiest player in the whole tournament, by French people. But as well as Griezmann there's the 19-year-old Kylian Mbappe (pictured below) who could come out of Griezmann's shadow and emerge as the star of the team. He has the pace, the skill and the hunger to cause more havoc in Russia than Boris Johnson. Then there's the likes of Barcelona's Ousman Dembele and Lyon's (maybe Liverpool's) Nabil Fekir, who could both waltz past defenders pushing a shopping trolley and score goals blindfolded.

Then there's Paul Pogba, although he only seems to disappoint these days and tends not to show up for the big, big games. But such is the strength of France's squad, they might not need him. He is still of course an amazing player on his day.

Florian Thauvin, Thomas Lemar, Blaise Matuidi and Corentin Tolisso are not too shabby either. Yep, France are going to win the World Cup.

And defender Adil Rami might not be a leading light on the pitch but he is a star in his own way simply for the fact he is dating Pamela Anderson. So do the French public think they can win?

They did until France went and drew 1-1 with the United States which in typical fashion led to an overreaction among French fans.

From thinking they were going to win the tournament they were suddenly in the depths of despair almost wishing they were not at the World Cup at all. It was like they felt they had been cheated into feeling positive and reverted to stereotype of being overly negative.

Thankfully Zinedine Zidane, the star of the 1998 World Cup squad and certain future manager of the national team, tried to calm everyone down by stressing that warm up games don't matter. And they don't. France are going to win the World Cup. (French fans watch their team lose to Portugal in the final of Euro 2016.)

So how do you sum up French fans?

In a way they are opposite to England fans, who, perhaps apart from this year, normally think their team are going to win the World Cup just because they qualified and they won it 50 years ago thanks to a dodgy goal.

French fans won't really be optimistic unless their team gives them reason to be so.

In Paris at least, hardly a hotbed for football (unlike its suburbs) interest only picks up if France go far in the tournament.

Then you'll see a lot of those chic Parisian women and fluffy haired, red jean-wearing Parisian blokes suddenly ditch the scarves for blue strips and descend on bars to watch the football. Elsewhere in the country, apart from rugby-loving south-west, the locals are a bit more into football. Should we foreigners support France?

It's a personal choice really.

Many readers will have an excuse not to, at least until their own teams are knocked out.

Some foreigners have lived in France for decades but could not bring themselves to really support Les Bleus while others, who have thrown themselves into French life, might even support France before their own national team.

What French do I need to know If I want to support Les Bleus?

If things don't go to plan you are probably going to need the words “putain de bordel de merde” which literally means the whore of the brothel of shit” or “f**k f**k f**k!).

But perhaps if you are watching with your French mother-in-law just use “mince” for when things don't go to plan for France. It means “oh crumbs” or something along those lines.

Really, if you want to support France you just need to shout one phrase repeatedly: “Allez les bleus”

This literally means “Go the blues” and is perhaps the most popular phrase of French football. Pronounced “allay lay bleugh”, you can shout it before, during, or after the game. If you'd prefer, a similar version is “Allez les gars” (Allay lay garr) which means “Come on guys” in a kind of encouraging tone.
And if you want to urge France to score a goal then just shout allez! it's basically their version of “go onnnnnn!”

But if France don't win, who will be the scapegoat?

The coach Didier Deschamps isn't the most popular, even though he was the captain of that heroic 1998 team and could be lambasted if fans think his tactics are to blame for any poor performances.

The lanky Olivier Giroud, who we mentioned earlier, stands out from the rest because he's not the most naturally gifted.

While he can be effective in scoring goals he also has the tendency to miss sitters. Given he has already been booed when playing for France, Giroud could be in for a rough ride if he fluffs any chances your granny could have bagged. Then there's Paul Pogba. If he is seen to be spending too much time on his haircuts and not enough on helping his team, fans' patience will likely wear thin.

When are the French team playing?

These are the first three matches but they will hope to play a few more including the final on Sunday July 15th.

Where to watch France play?

The French government has banned the instillation of big screens for the tournament over terror fears although the directive suggested that city officials hoping to bend the rules and organise their own fan zones with big screens can do so.

However most cafes and bars will have televisions installed and many will put up new ones so fans can catch games on the terraces in true French style.

However there is one place in Paris that has been allowed to put up a big screen for the tournament and should be worth checking out.

The Magasins Generaux cultural space, which is actually in Pantin (see map below), just outside the north-eastern edge of Paris but can be reached on the Metro or a bike ride along the Canal de L'Ourq has dedicated 2,000 square metres to football.

The “summer zone” described as “Greater Paris' must-attend event during this summer's World Cup” has a fully functioning football pitch and a giant screen that will show all of France's matches and all the other major games.

There's also a football exhibition “Par amour de jeu 1998-2018” which could be worth the visit alone.