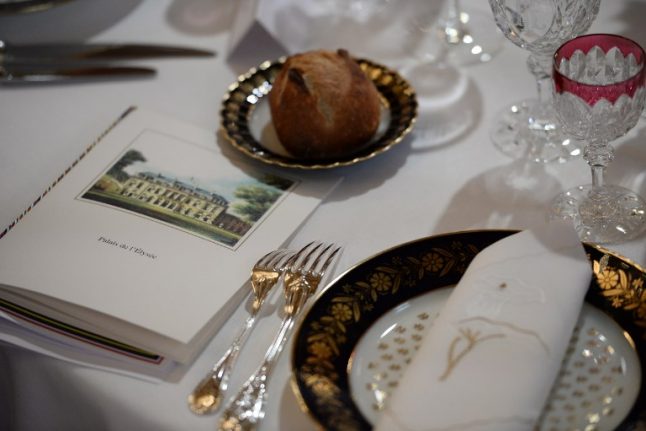 Emmanuel Macron may find his image as the 'rich man's president' – due to his past as a banker and his business-friendly measures – even harder to shake off, after a new row sparked by a new set of plates for the Elysée Palace.

In May, the presidential palace announced it had ordered 1,200 new plates for state dinners to replace sets which are 'showing signs of wear'.

The plates currently used are from collections ordered by former French presidents René Coty in the 50s and more recently Jacques Chirac, so it was not seen as extravagant for the youthful Emmanuel Macron to want something more modern to reflect his presidency.

Neither were any eyebrows raised at the total bill of €50 000 put forward by the Elysée.

But this week, a row has broken over news that the new set could actually cost 10 times that much, in other words half a million euros, according to the Canard Enchaîné newspaper, which is known for having sources in high places.

“The precise total cost is unknown for the moment, but what is sure is that the final bill will be huge,” the satirical weekly newspaper said.

“The painful bill should cost half a million euros given current rates, which is about 400 euros a piece for a basic plate, and from 500 euros a plate for a more contemporary model,” it said.

The problem isn't that the president wants to impress his guests at state dinners with his fancy plates – but that the French taxpayers will have to pay most of the hefty sum out of their own pockets. The crockery will be made by the national ceramic manufacturers, the prestigious 18th century “Cité de la céramique Sèvres Limoges” which has been supplying France's kings and queens and leaders with fancy porcelain for nearly 300 years.

The 50,000-euro sum, to be footed by the Elysée, corresponds to what the thirty artists who took part in the competition to design the new set will be paid.

But the rest will be paid for by the “Cité de la céramique Sèvres Limoges”, which receives 60% of its funding from the state.

“That's how the presidential crockery can get around budgetary discipline,” the Canard Enchaîné commented, adding that the Elysée is flouting its own transparency rules which states that the palace cannot bill its expenses to other institutions.

And to lend the whole affair a more regal air, the new collection will be called “Bleu Elysée” as a reference to “Bleu de Sèvres”, a deep blue colour used in the porcelain made for France's kings and queens.

The new design by artist Evariste Richer will feature drawings of the Elysée palace drawn in the style of old-fashioned architecture plans. The new collection will comprise 300 bread plates and 900 presentation plates which will be used for big state dinners.