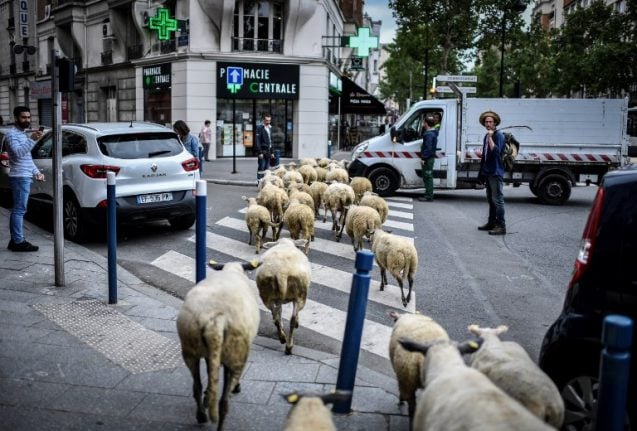 An urban farmer crosses a street with a herd of sheep in Aubervilliers. Photo: AFP
Every month, enthusiastic shepherds from an urban farming project in Aubervilliers, just north of Paris, release their dozens-strong herd from their enclosure in a park for a wander in the streets.
The goal is two-fold: to give the animals access to plants that are good for them, and to bring a little rural peace to a neighbourhood better known for dreary tower blocks and industrial sites.
“Each time it's done in good humour, they're very well behaved,” Julie-Lou Dubreuilh, co-founder of the Urban Shepherds cooperative, said of her flock. Sheep graze in front of a housing complex in Aubervilliers. Photo: AFP
“You can really feel that this helps the housing estates to unwind, for the town to de-stress.”
The sheep make their way at a leisurely pace across zebra crossings, past cafes and petrol stations, stopping to graze at the base of graffitied public apartment blocks.
Dubreuilh said these outings were vital for the health of the sheep under the project's chemical-free farming methods.
“We're based at the La Courneuve park which is about 400 hectares,” she told AFP.
“There's lots to eat there, but weirdly when you want to do livestock farming without using antibiotics or worming medication, you have to give the sheep the possibility to care for themselves,” she explained.
“Often that means plants which grow by paths and wasteland, and you can often find those in town. For example, just over there I can see a mugwort plant — that's perfect for de-worming.”
Please consider joining our membersheep scheme.