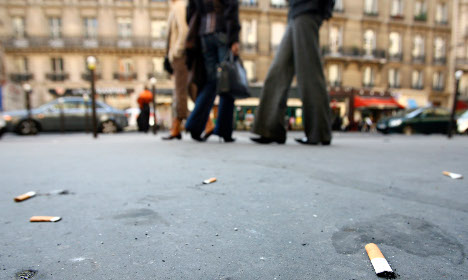 In France, around 30 billion cigarette butts are tossed out onto the street every year.

In Paris alone, around 350 tonnes of them are cleaned up every year.

This costs money, but it's also a health hazard. Cigarettes, especially their filters, contains substances including polonium 210, acetone and benzopyrene, which can turn into toxic waste.

Cigarette butts take 10 years to decompose, and often find their way into the sewers where they can form compact masses that block pipes.

So who should pay for cleaning them up?

The French government says it is up to cigarette manufacturers to pay the bill.

“This is taking a toll on the environment and it is the taxpayers who are paying for these cigarette butts to be swept up out of their own pockets through local taxes. This is no longer tolerable,” junior environment minister Brune Poirson, who is meeting the tobacco firms, told Europe1 radio.

But the tobacoo industry – unsurprisingly – doesn't want to pay for what is says is down to the smokers' own responsibility.

The company suggests other ways it could help to tackle the pollution problem could be by giving money to environmental charities or funding tobacconists to hand out pocket ashtrays.

After Thursday's meeting, the industry will have a few months to come up with concrete proposals to tackle the problem before meeting with the government again in September. So what happens to the discarded cigarette butts now?
Well, without a recycling plan in place, there's no option but to incinerate them.
And it's French company Chimirec, which specialises in the collection of hazardous industrial waste, which is currently responsible for gathering the butts from the collection points around the Paris business district of La Defense.
“For now, they end up in incineration because the volumes we collect are too low and it is not profitable enough to create a sector dedicated to their recycling,” Chimirec's sales director Stéphane Debicki told Le Parisien.
Fines
Paris authorities have long tried to dissuade Parisians from throwing away their butts with the preferred tactic being to increase the fines handed out.
In 2015, the fine for tossing a cigarette butt on the streets of Paris was raised to €68.
“These fines aim to give Parisians and visitors a sense of responsibility so that they also become actors in keeping the city clean,” said Paris Town Hall's cleanliness tsar Mao Peninou at the time.
However anyone who walks around the streets of Paris, especially near cafe terraces will be forgiven for wondering whether the fine increase has made any difference at all.
The problem of cigarette butts was made considerably worse ever since a smoking ban in public places was introduced back in 2008, forcing many more people to begin puffing outdoors.