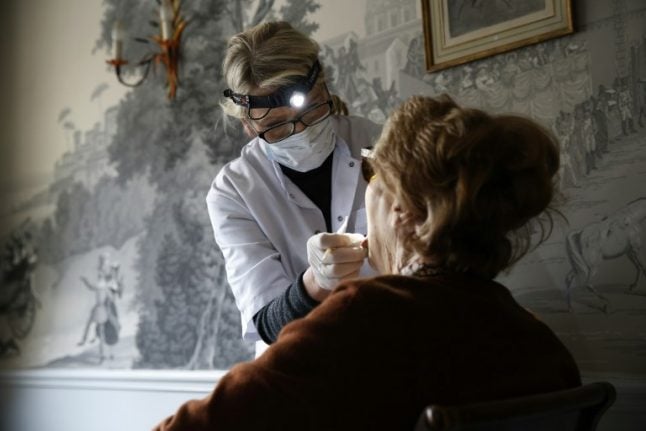 Photo: AFP
French President Emmanuel Macron put into action one of his election campaign promises on Wednesday.
On Wednesday the country's Ministry of Health announced details of a plan called “100% Health” (100% Santé) which is designed to help cover the costs of healthcare in three areas: the costs of glasses, dental treatment and hearing aids.
The government says the principle is to meet the necessary health needs of the public: “to see well, to hear well and to take care for your oral hygiene – with a guarantee of quality.”
This is what you need to know.
Why are the changes being brought in?
The changes are intended to make it easier for people to access certain kinds of healthcare and will mean, in theory, that patients don't have to pay anything at all for certain glasses, dental surgery and hearing aids.
When it comes to health costs in France, the government covers a certain percentage, top up insurance known as a “mutuelle” covers most of the rest and there is usually a small amount to be paid by the patient (called “reste à charge” in French).
But while the government says that this leftover amount is lower than in other countries, it is still putting poorer people off seeking treatment, particularly when it comes to going to the dentist for certain treatments like having a crown fitted, where the left over amount has been steadily rising over the past decade. Photo: AFP
According to reports just 43 percent of French people visit the dentist once a year compared to 71 percent in Germany and Britain, 85 percent in Denmark and 80 percent in the Netherlands.
At the moment, the average top-up costs people have to pay to cover the “reste à charge” payment  €95 for glasses, €135 for dentures and €780 for a hearing aid.
The government wants to wipe out these top up costs in the three areas. The bill for easing the cost for the public will be shared out between the state through the Secu (social security) and complimentary health insurance known as “mutuelles”.
The cost of the changes to the government will be anything between €1 billion and €4 billion, depending on who you listen to.
When will they be brought in?
The changes are going to be rolled out steadily over the next 2-3 years (see below for details).
What exactly is changing?
Glasses
From 2020, the price of glasses will be fully covered for “quality lenses” and for frames costing up to €30.
Opticians will stock 17 adult frames and seven children's models, all available in multiple colors and wearers will be able to renew them every two years and once a year for under-15s.
On the other hand, customers who want branded frames or a special treatment on the lenses may have to cover part of the cost themselves, depending on the benefits of their top-up health insurance known as a “mutuelle”.
Hearing aids
Anyone suffering from hearing problems will be reimbursed 100 percent of the price of hearing aids costing up to €950 per ear from 2021.
The offer will include in-ear devices and behind the ear hearing aids with an amplification of at least 30 decibels, as well as noise eradicators, anti-feedback effects and at least 12 tuning channels.
—- A man having a hearing aid fitted in France. Photo: AFP
Dental care
Certain dental surgery treatment will be 100 percent covered in future.
This will include the cost of metal crowns for back teeth and ceramic crowns for more visible teeth at the front of the mouth as well as certain kinds of bridges and dentures.
While other kinds of dental surgery, for example the fitting of a ceramic crown at the back of the mouth, will see costs limited
The government have found it particularly difficult to negotiate an agreement with dentists over the new changes.
According to reports in the French press, dentists have been increasing the leftover costs for patients for certain kinds of treatments to make up for the fact that they are not paid enough for basic care such as fillings.
The government also wants to cover the costs of check-ups and any follow-up treatment for young people aged 3-24 as part of its focus on preventative dental care.
The government says that 23 percent of children of workers have untreated cavities compared to 9 percent of the children of high earners known as cadres.
At the same time, the cost of treatments which fall into the “soins conservateurs” category, which includes root canals, fillings and the removal of tartar will gradually increase.
It is unclear who will cover the cost of these treatments although they are already heavily subsidized by the French government which covers 70 percent of the cost. Photo: AFP
Why is there so much concern?
To some the changes sound a bit too good to be true and it has been suggested that “mutuelles” will account for the extra cover by increasing the cost of contributions.
Consumer associations have pointed to the risk of the rate of “mutuelles” going up, with France Assos Santé, which represents the interests of healthcare users in France, calling for these rates to be officially observed.
“Overall we are for the changes the government is introducing — they represent progress and are a good thing,” Féreuze Aziza who is in charge of the health insurance department at France Assos Santé told The Local.
Aziza said however that there is some concern that in addition to the cost of “mutuelles” going up, the price of other treatments that aren't included in the government's new changes will shoot through the roof if they are allowed to.
“The people that would be most affected by the price of other treatments going up would be society's most vulnerable,” she said, adding that older people, for example, who need a higher number and greater variety of treatments could see their wallets hit despite the government reforms.
“This is something we intended to remain vigilant on,” she said.
Meanwhile, the government has asked “mutuelle” providers not to raise their prices but there is no official agreement on this.
“We hope that the increase in contributions to the cost of mutuelles will be as moderate as possible,” the president of the French “mutuelles” association Thierry Beaudet told France 5 on June 5th.
He was concerned that in future poorer people in France will give up paying for a mutuelle insurance which would leave them back at square one.
“Today the French don't seek care because of the large excess they have to pay for it,” he said. “It shouldn't be the case in the future that they don't seek it because the cost of their contributions is too high.”
CLICK HERE for more information in French