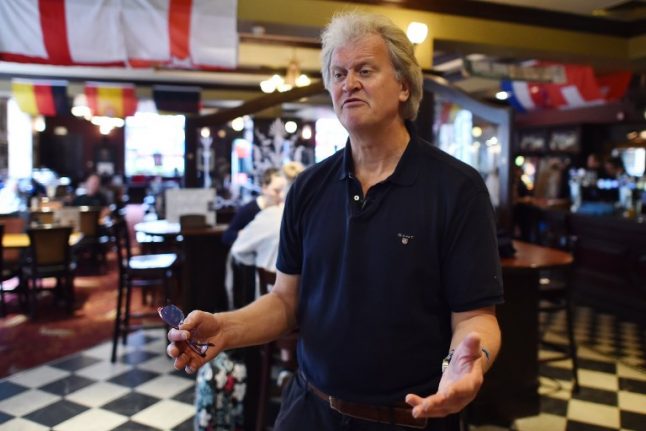 Chairman of Wetherspoons pub chain, Tim Martin. Photo: AFP
As of next month, punters at the 800 Wetherspoons pubs won't be able to get their hands on a bottle of French Champagne or prosecco from Italy, the company has revealed.
The decision is all part of its move to stop selling products made in the EU said the company's founder Tim Martin.
At the moment the pub chain, known for its cheap beer and cheap food sells two million bottles of sparkling wine every year — mostly prosecco — and is planning to switch up its stock to sell alternatives from the UK, Australia and New Zealand over the next couple of years. Photo: AFP
Similarly the company is planning to swap its current offering of beers from Germany with beers brewed in the UK, with Martin saying that its new selection of non-EU alcohols would be cheaper.
“There will be an inevitable transfer of trade post-Brexit to countries outside the EU, which will reduce prices in shops and pubs,” he said.
However the French champagne industry seemed unconcerned by the news.
“It seems to be economically driven, combined with Mr Martin's strong expressed feeling about European products,” Francoise Peretti, director of the Champange Bureau UK told the BBC.
“UK consumers have clearly voted it [champagne] its sparkling wine of choice, making the UK the leading export market for champagne,” Mr Peretti said.
Wetherspoons only stocks Moët & Chandon champagne of which it sells under 100,000 bottles of a year.
And some Twitter users seemed surprised to learn that the pub chain even sold Champagne, such is the reputation of the pubs for being “soulless beer-drinking pits”

Erm… how often would people buy champagne in Weatherspoons?

Was anyone else even aware that Weatherspoons sold champagne? I certainly wasn't. I only ever went in there for the all day breakfasts.