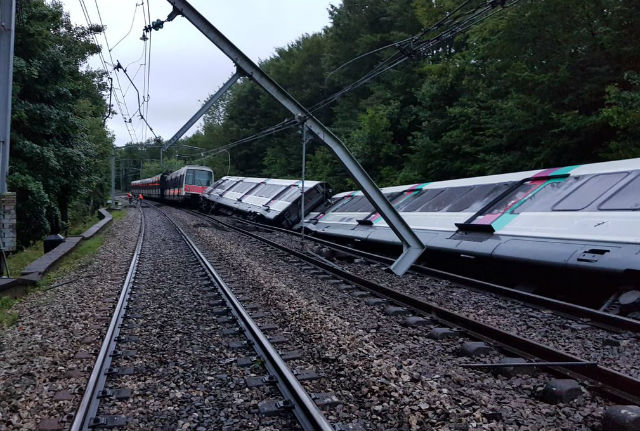 Photo: RATP
“There has been… a landslip on the RER B” between the southwestern suburbs of St-Remy-les-Chevreuse and Orsay, the minister, Elisabeth Borne, told Franceinfo radio. It caused “three carriages to overturn. Fortunately, there are only seven slightly injured, who are being treated.”
Paris transport body RATP has announced that an embankment collapsed due to heavy rain shortly before 5 am, with the train partially overturning as it was heading towards the French capital.
According to the mayor of the town of Gif-sur-Yvette Michek Bournet there were very few people on board at the time, given that it was the first train of the morning.
“We could have had a disaster because if it was an hour later there would have been a lot of students on board,” he told Le Parisien. The train was reportedly travelling at a slower speed than normal after the driver had been warned a tree had fallen on to part of the track.
But given that it was dark the driver was unable to see that part of the support for the tracks had been washed away.

Authorities in the Essonne department where the accident took place confirmed seven people had been slightly injured.
Several departments in the Paris region have been placed on an orange alert for heavy rains and flooding, as storms battered much of France over the past days.

President of the Ile-de-France region Valérie Pécresse reacted to the accident on Twitter: “All my thoughts are with the passengers of the RER B who were victims of a derailment this morning in Courcelles-sur-Yvette. My thanks to the rescue teams who were mobilized.”

Traffic is currently interrupted between Saint-Rémy-lès-Chevreuse and Orsay-Ville in Essonne and substitute buses have been set up.

Disruptions on the line

Bad weather also caused disturbances elsewhere on the Paris commuter train network.
Torcy station in Essonne is flooded and RER A trains are not stopping there while Orlyval, the metro shuttle service connecting Paris's Orly Airport with the city's RER network, has also been disrupted due to flooding.