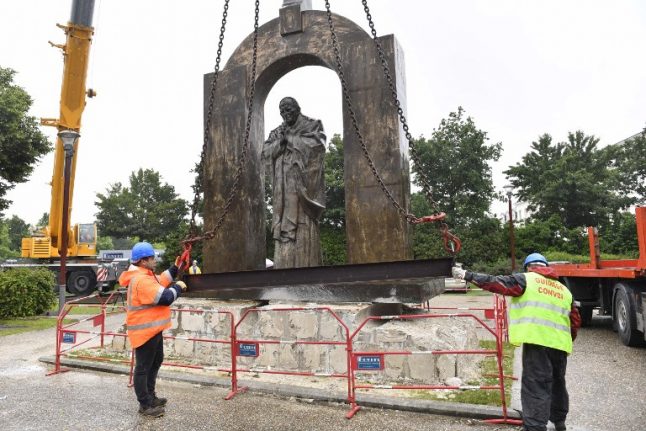 Workers move a bronze statue from a public car park and place it a few meters away. Photo: AFP

A crane lifted the papal statue from a square in the town of Ploermel, Brittany, about 30 metres to nearby private land after an outcry by French secularists over it standing in a public place.

“This is the outcome, compliance with French law, respect for secularism and the decision of the Council of State,” said Father Christophe Guegan, parish priest at Ploermel, adding he hoped “that it brings peace to the city”.

The statue, by Russian artist Zurab Tsereteli, was erected under an arch topped by a cross in 2006.

But the National Federation for Free Thought, a non-profit humanist organisation, took the issue to court alongside two local residents.

By installing the statue on private land, the statue of the Polish pope theoretically no longer breaks the 1905 law.

At one stage, the Polish government had proposed moving the statue to Poland due to the row.