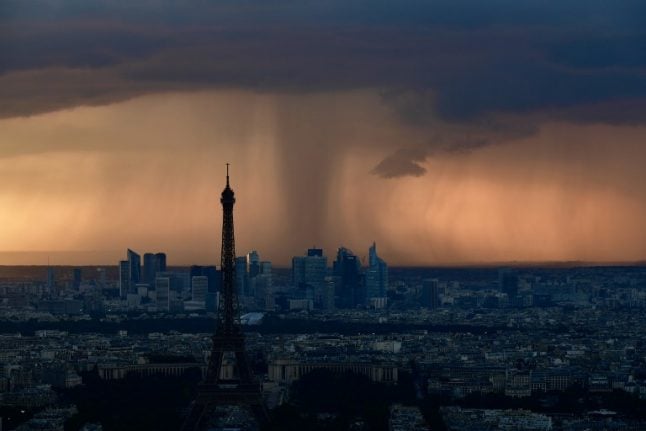 Flooding in Tennie in northwestern France. Photo: AFP
The heavy rain which has hit France in recent weeks has left destruction in its wake in certain parts of the country… and in some places it has also broken records.
Over the past day or so, the greater Paris region of Ile-de-France has seen the equivalent of 47 days of rainfall in just 24 hours, according to Méteo France.
In Orly, south of the French capital, 76 mm — the equivalent of 47 days of rain — fell in just 24 hours, setting a new record.
READ ALSO: A motorist advances along a flooded road to return home after a rain storm on June 11, 2018, in Tennie, northwestern France. Photo: AFP Likewise in Torcy in the eastern suburbs of Paris a whopping 81.8 mm fell in 24 hours — usually the amount seen over 50 days.
Meanwhile in Montsouris in the south of Paris 67.7 mm fell which is the equivalent of 41 days of rainfall.
This is the largest amount of rainfall seen in the region since the stormy weather began in mid-May.
Similarly in the town of Nort-sur-Erdre in the Loire-Atlantique department in western France 86.3 mm or the equivalent of 60 days of rain fell in 24 hours.
France was braced for yet more heavy rains and flooding on Tuesday as 22 departments in the north and south west of the country remained on alert.
Weather forecaster François Jobard described the rainfall as an “exceptional” situation to France info, adding that it was similar to “tropical rains”.
But he went on to say that conditions are expected to improve on Wednesday.
“The weather should be almost dry although some showers are expected near the Pyrénées-Atlantiques and the southern Alps,” he said.
“Since mid-May France has experienced a hot and unstable air mass that persisted and was never really swept away. Tomorrow, we will find more oceanic currents, which are less humid and more stable, and therefore a more classic situation for the season.”
—–

—–
Record rainfall in Nantes
Since June 1st, 138 mm of rain has fallen in the western city of Nantes, beating the previous recorded rainfall for the month of June, according to French press reports.
So far the heavy rain which has hit France in recent weeks has left destruction in its wake in certain parts of the country.
On Tuesday morning a Paris commuter train partially overturned leaving seven people injured. RER B train overturned on tracks due to heavy rain. Photo: RATP
And in Mayenne in northwestern France, the authorities evacuated about fifty homes yesterday evening.
The storms have so far caused four deaths including a man drowned in his car in central France and a woman in her nineties who died probably suffering a heart attack while trying to mop up the water in her flooded home.
Meteo France estimated the number of lightning strikes in May at 182,000 nationwide, almost double the record figure for the same month previously set in 2009.
Heavy rain, lightning and sometimes hail have hit wine-growing areas in the Bordeaux, Cognac and Champagne regions over recent weeks, causing major damage to crops.