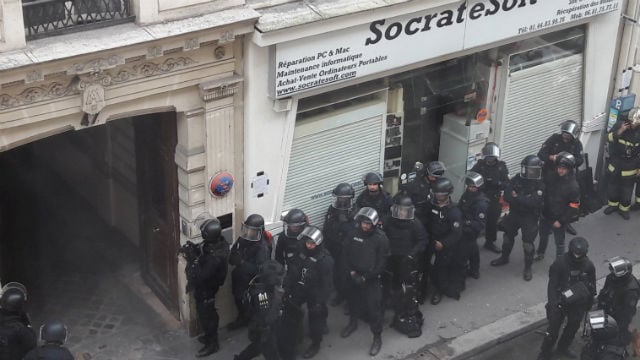 Photo: Philippe Grasset/Twitter
“Two hostages, including one who had petrol poured on them,” have been freed police said.

The standoff began around 4:00 pm, with BFM television reporting that the man had entered the offices of a start-up company on the Rue des Petites Ecuries, a gritty  area of the bustling 10th arrondissement.
At least one other man was lightly injured while fighting with the hostage-taker and escaping before police arrived on the scene.
The motive for the attack was not clear but incident did not appear to be terrorism-related.
“Based on our initial investigations it could be a mentally unstable person whose motivations are still unclear,” another source said.
Crowds of bystanders were held back by a security perimeter at the site,  where police and rescue workers were massed, deploying at least one  remote-controlled robot on tracks toward the building where the armed man had barricaded himself. Rue des Petites Ecuries. Googl maps
According to reports he had demanded to be put in contact with the Iranian ambassador in Paris and that he didn't want any police cars in the vicinity.
France has been on high alert after a series of jihadist attacks in the past three years, most recently a Saturday night knife attack in Paris last month in which one person was killed

Several hostages held by a man in a Paris apartment in the 10th district. Entire area shut down. Hundreds of cops. Bomb squad also present. pic.twitter.com/StkVFWqurX