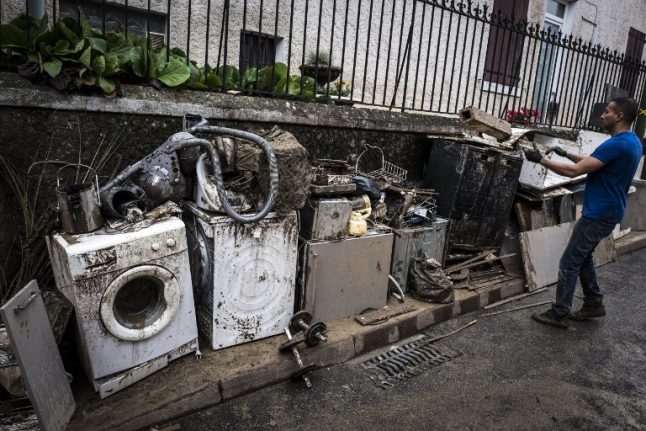 People clear the mud out of their houses in Chaponnay near Lyon on June 8th a day after a heavy rainstorm led to flash floods in the region. Photo: AFP
The thunderstorms aren't over yet.
On Monday morning France's national weather agency Meteo France placed 37 departments in northern and central France on orange alert — the second highest warning — for violent storms and flooding.
People in these areas are advised to remain vigilant due to the risk of dangerous weather. Map: Meteo France
The departments on alert are: Aisne, Cher, Eure, Eure-et-Loir, Indre, Indre-et-Loire, Loir-et-Cher, Loiret, Mayenne, Oise, Orne, Sarthe, Paris, Seine-Maritime, Seine-et-Marne, Yvelines, Essonne, Hauts-de-Seine, Seine-Saint- Denis, Val-de-Marne and Val-d'Oise, Ardennes, Aube, Marne, Haute-Marne, Meurthe-et-Moselle, Meuse, Moselle, Bas-Rhin Rhine, Haut-Rhin and Vosges.
Meanwhile, the Ille-et-Vilaine department in Brittany and Loire-Atlantique and Vendée in western France were also on alert for storms and flooding and Gers and Tarn-et-Garonne in the south west of France were also on alert for flooding.
The alerts were updated on Monday at 10 am and are expected to remain in place until Tuesday at 6 am.
Météo France forecasts a “rainy stormy situation requiring particular vigilance”.
“Thunderstorms will bring significant rainfall of about 15 to 30 mm and locally 40 to 60 mm in a short space of time,” said the national weather agency.
“This will particularly true for the western Pays de la Loire region where these intense rains will continue in the evening and night,” Meteo France said.
So far the storms which have hit France in recent weeks have left destruction in their wake in certain parts of the country.
On Friday, the storms claimed a fourth life when a man drowned in his car in central France.
The latest death came after a 37-year-old man was found drowned in his car in northern France on Tuesday. Photo: AFP
On Wednesday a woman in her nineties died in Montmorillon,  a town in central-western France, probably suffering a heart attack while trying to mop up the water in her flooded home.
Meanwhile the body of a woman in her eighties was found in a river in the Lot-et-Garonne region of southern France where heavy rain had fallen overnight, police said.
Meteo France estimated the number of lightning strikes in May at 182,000 nationwide, almost double the record figure for the same month previously set in 2009.
The small town of Morlaix in northwestern Brittany was still counting the cost after being submerged on Sunday night when an estimated month's worth of rain fell within half an hour.
Heavy rain, lightning and sometimes hail have hit wine-growing areas in the Bordeaux, Cognac and Champagne regions over recent weeks, causing major damage to crops.
Storms have also disrupted play at the Roland Garros tennis tournament in Paris.