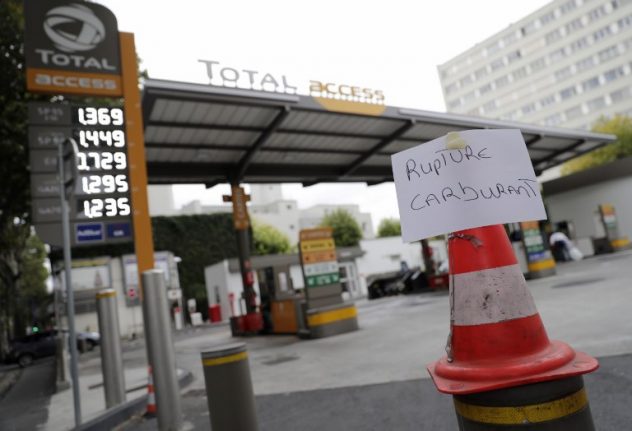 Illustration photo: AFP
Members of France's main farmers unions the FNSEA and Jeunes Agriculteurs (Young Famers) have begun blockading oil refineries and fuel depots owned by French multinational oil and gas company Total around the country.
The protests are mainly motivated by plans by oil giant Total to import palm oil for use in biofuels, a move they denounce as unfair competition which jeopardises their livelihood, particularly that of farmers who produce rapeseed oil which is used for biofuel.
The blockades are set to remain in place for at least the next three days. Although some farmers have suggested the militant action will continue beyond three days.
Farmers are currently blocking 14 oil refineries and depots in France out of a total of seven refineries and around 200 fuel depots, 90 of which are described as “principle” depots.
However things could quickly escalate, with members of the farmers union in the greater Paris region of Ile-de-France announcing their intention to also block the principal fuel depot of Grigny in Essonne which would paralyze other depots in the region.
But is this likely to lead to a fuel shortages around the country, in the same way petrol stations ran dry in previous protests in 2016? (Motorists queue for fuel during a blockade of refineries and depots in 2016.)

Transport in France has already been severely disrupted in recent months due to the ongoing rail strikes, that are due to end in June and the public could do without more disruption on the roads.

However the chances of petrol stations running dry will likely will depend on the public and how they behave in the days to come.
During previous blockades of fuel depots it has been drivers panic buying that has led to petrol stations putting up “pumps empty” signs rather than the actual blockades. The more petrol stations run dry the more drivers tend to panic buy, which is exactly what protesting farmers hope to provoke.
In an interview on RTL on Monday morning France's Minister of Agriculture Stéphane Travert discouraged people from rushing to fuel stations and panic buying.
“There will be no shortage of petrol,” he said. “Do not rush into the service stations — that is often what creates the shortage.”

On top of that a source at the Ministry of Transport spoke of the government's “strategic stock” of fuel which corresponds to the equivalent of three months of fuel consumption in France.
The government can choose to release this back-up fuel to supply petrol station directly if the farmers' movement were to continue.
It can also send in the police to clear away the blockades although the government will not want to inflame the situation.
Nevertheless, as was seen in spring 2017 during the French tanker drivers strike, fuel supply can quickly become difficult in some areas for example in the west of the country and in Ile-de-France.
And French farmers appear to be sending the opposite message to the government, encouraging people to fill up their tanks. The blockade at Total's La Mede refinery in Chateauneuf-les-Martigues in southern France on June 10th. Photo: AFP
“I advise people in Toulouse to refuel on Monday because we are here today and we can very well block off the other two depots fueling Toulouse if nothing shifts,” a protesting farmers in the Toulouse-Lespinasse depot told La Dépêche du Midi.
The occupation, which began on Sunday night, is taking place at oil refineries in Lyon, Gonfreville-l'Orcher, Le Havre, Grandpuits (Seine-et-Marne), La Mède (Bouches-du-Rhone), as well as the oil depots at the port of Rhone Edouard Herriot, the port of the Rhine, that of Vatry (Marne), Lespinasse near Toulouse, Coignières (Yvelines) and Cournon in Puy-de-Dôme.
Farmers also planned to prevent access to oil refineries at Dunkirk (North), Grigny (Essonne), Gennevilliers (Hauts-de-Seine) and one in Donges (Loire-Atlantique).
At least 200 farmers also began to dump dirt on the roads leading to the Total refinery in Grandpuits (Seine-et-Marne) at around 11pm on Sunday night and installed some 40 tractors, according to Sébastien Guérinot, president of the Jeunes Agricultures in the department.