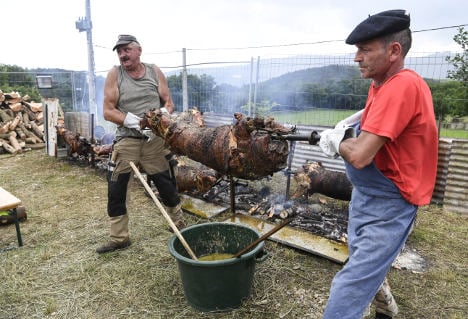 But as the globe's top footballers prepare to do their best over the coming month, France is hosting a gastronomic prelude to the World Cup where the appetising idea is, literally, to do one's wurst.

Yes, it could only be the Sausage World Cup.

The southeastern village of Vanosc has invited some 200 qualifiers, pared down from an initial 1,500 candidates, for a three-day event, ending Sunday, to see who has the tastiest tube.

The youngest hopeful is aged just ten; the oldest not past his sell-by date yet at a sprightly 82.

Around 6,000 people are expected to show to taste what's on offer at an event which is the brainchild of pensioner Rene-Louis Thomas, who came up with the scheme in 2016 to mark “the civilisation of the sausage” after visiting Paris's famed Rungis market where his cousin works.

Most competitors are French but there is a smattering of Belgians, Britons, French Canadians, Swiss, Italians, Swedes, Americans, and even Australians offering anything from pork, beef, bull, lamb or duck to horse and even kangaroo.

The judges will raise a glass or several of white wine between tastings – their excuse being that water does not fully rinse away the fat from the previous morsel.

The Ardeche region Academy of Sausage Lovers says in its charter that the idea is not to discover the world's best sausage — though the winner will be assigned a gold medal — as “that does not exist.”

Rather, it is to impress upon consumers and producers the depth of quality out there — as well as quantity French aficionados having chomped through 73,000 tonnes of saucission last year, according to official data.