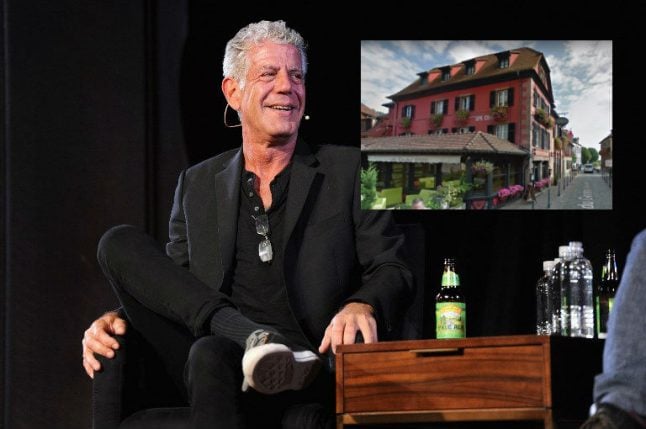 Bourdain, a best-selling food, fiction and non-fiction author as well as TV personality was in France working on a shoot for his series, Parts Unknown, on the cable network CNN.

His close friend Eric Ripert, a French chef, found Bourdain unresponsive in his hotel room on Friday morning, according to CNN.

CNN confirmed Bourdain's death on Friday and said the cause of death was suicide.

A French prosecutor later confirmed that Bourdain had been found dead in a hotel in the picturesque town of Kaysersberg (see pics below), just south of Strasbourg, in the Haut-Rhin department of eastern France,

“We learned of the death by hanging of the American chef this morning in the Chambard luxury hotel in Kaysersberg,” said Christian de Rocquigny du Fayel, adding: “At this stage, we have no reason to suspect foul play.”

Police were investigating the circumstances of his death and a coroner was at the scene, said Rocquigny du Fayel, who is based in the nearby city of Colmar.

Kaysersberg, a picturesque village of half-timbered houses, cobbled streets and window boxes in the Alsace winelands, was elected “France's favourite village” in 2017.

It is situated about an hour's drive from the city of Strasbourg. “It is with extraordinary sadness we can confirm the death of our friend and colleague, Anthony Bourdain,” CNN said in a statement Friday morning.
His love of great adventure, new friends, fine food and drink and the remarkable stories of the world made him a unique storyteller.
“His talents never ceased to amaze us and we will miss him very much. Our thoughts and prayers are with his daughter and family at this incredibly difficult time.”
On the network, anchors struggled to hold back tears as they recalled their late colleague in heartfelt recollections and urged people faced with despair or who know people who are struggling with depression to call a suicide hotline.

I've watched a lot of Parts Unknown and it's very rare to see any sort of travel show where the host consistently approaches locals on their own terms, without any sort of juvenile infantilizing or personal exceptionalism. Anthony Bourdain was very cool.

Bourdain won many awards throughout his career and took viewers around the world through his Emmy-award winning Parts Unknown series.
France was featured three times on Bourdain's Parts unknown.

Back in October 2017, Anthony Bourdain went on a dairy binge in the French Alps with his his close friend the French chef Eric Ripert.

Before that in October 2015, Bourdain and Ripert visited France’s city of Marseille where they discovered the local cuisine and indulged on Corsican cheeses. A gifted storyteller, Bourdain explored haute cuisine and street food alike in his travels, passionately encouraging viewers to “eat and drink with people
without fear and prejudice.”
He often drank on the show and was public about his struggle with own demons, including drug abuse.
“We ask very simple questions: What makes you happy? What do you eat? What do you like to cook?” Bourdain said in an acceptance speech for a Peabody Award in 2014.
“And everywhere in the world we go and ask these simple questions. We tend to get really astonishing answers.”
Bourdain leaves behind a teenage daughter Ariane, from his relationship with his ex-wife Ottavia Busia. He had been dating Italian actress Asia
Argento since 2017.
After a start washing dishes in a restaurant, Bourdain gradually rose through the ranks to become a chef.
His 2000 memoir, “Kitchen Confidential: Adventures in the Culinary Underbelly,” kicked off his celebrity career and led him to become a television host, starting with “A Cook's Tour” on the Food Network.
“Tony was an exceptional talent,” CNN President Jeff Zucker said in an email to employees. “Tony will be greatly missed not only for his work but also for the passion with which he did it.”