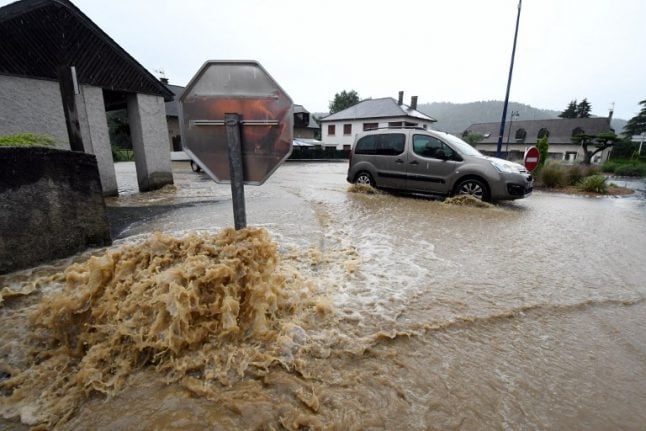 The deaths bring the toll from the record storms to three in the past two days. A 37-year-old man was found drowned in his car in northern France on Tuesday.

On Wednesday a woman in her nineties died in Montmorillon,  a town in central-western France, probably suffering a heart attack while trying to mop
up the water in her flooded home.

Meanwhile the body of a woman in her eighties was found in a river in the Lot-et-Garonne region of southern France where heavy rain had fallen
overnight, police said.

The French weather service Meteo France said Wednesday that the risk of storms remained high over most of the country. Over the past 12 days rescue services have been in action 7,900 times across France, according to the interior ministry.

On May 26 a six-year-old girl fell to her death from the branches of a tree during a fierce storm.

The series of thunderstorms have unleashed record amounts of rain in some areas. Meteo France on Tuesday estimated the number of lightning strikes in May at 182,000 nationwide, almost double the record figure for the same month previously set in 2009.

The small town of Morlaix in northwestern Brittany was still counting the cost after being submerged on Sunday night when an estimated month's worth of rain fell within half an hour.

Storms have also disrupted play at the Roland Garros tennis tournament in Paris and has made conditions tough for professional cyclists in the Criterium du Dauphine race under way in southeastern France.