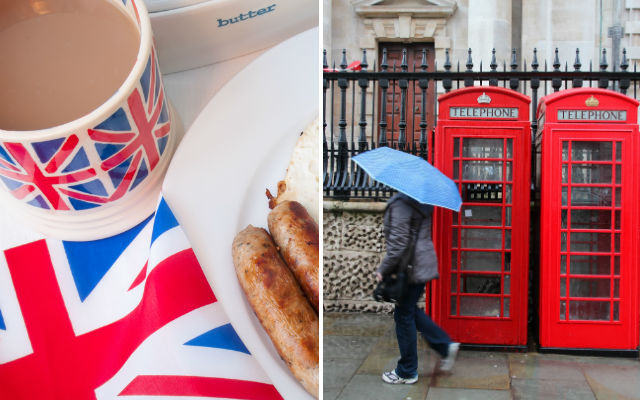 Photos: davidhanlon/Depositphotos and tupungato/
Most people are aware that cultural stereotypes are a bit of a minefield but, unless you decide to live alone in a cave when you live in a foreign country, they are also impossible to avoid.
And the longer you are in France you'll realised they have plenty of clichés about the British.
Not every stereotype you'll be confronted with about the Brits by the French is negative.
Far from it, in fact.
Many French people think the British are the funniest, most open, friendliest, liveliest people on earth.
And as with the more gloomy impressions they have of us (read on), these can also be slightly overblown.
Just like when it comes to British food.
This was a recent conversation.
French friend: “The only way the Brits cook meat is by boiling it.”
Me: “Err, that's not true. Why do you think your nickname for us is 'les Rosbifs'?”
French friend: “I don't know but my brother lived in Yorkshire for a year and he said his host family only served him meat that had been boiled.”
READ ALSO: Cold boiled pork. Photo: lisovskaya/Depositphotos
Needless to say I was pretty confused after this exchange. I mean who doesn't like a bit of boiled ham every now and then but to the family who served this poor French teen boiled meat every day for a year, you have a lot to answer for. Or do they always boil meat in Yorkshire?
On the other hand, I think it's somewhat fair to say that in general the French interest in how bad British food is nearly borders on an obsession. Many of them are utterly convinced that Brits have been subjected to a life of bland meat and boiled, flavourless potatoes.
Thirteen years ago, former French president Jacques Chirac called British cuisine the worst in the world after Finnish food.
And while it might be painful to hear, like a lot of stereotypes, there was once some truth to this stereotype.
After all it was only in the year 2000 that the so-called British Food Renaissance began and the majority of cultural stereotypes have had a much longer shelf life than that.
But now Brits, especially those who live in London and other big cities, might be justified in scoffing at the idea that restaurants in the UK aren't as good as in France.
In recent years British people have seen cookery programmes take over our TV channels, with celebrity chefs from Jamie Oliver to Gordon Ramsey and Nigella Lawson showing us that making delicious British food is not impossible.
As a result more people have been thinking about what they cook and men have been encouraged to try their hand at whipping up healthy meals for their families.
Clearly this won't have changed the way everyone in the country eats but it seems like it should be enough to bury the old stereotype that British food is terrible.
But French beliefs about the Brits don't stop there.
Over a long dinner with French friends, the conversation — at some point — is likely to turn to the differences between France and Britain and often it's at these moments, coincidentally as the wine is flowing, that the subject of our drinking habits tend to come up.
Now, I may be wrong but I think Brits get of a bit of a rough deal here. After living in France a while now, I think the French can knock it back with the best of them.
READ ALSO: Photo: AFP
But there's one crucial difference, they don't show it.
And that means that if you're in Paris late on a Saturday night, not only will the majority of people be behaving in a composed manner even at 2 am but you can be pretty sure that the drunk person singing loudly somewhere on the late night Metro isn't French… in fact, they're probably British.
Some people call that a simple sense of joie de vivre, others (the French among them) might consider it loutish.
Another common subject for the French to bring up is the bad weather in the UK.
Now whether or not this is fair very much depends on which parts of France and the UK you're comparing.
It feels particularly unfair, for example, in situations when it's been raining “like a pissing cow” (as they say) for a few days in a row in Paris and French colleagues catch sight of you and say something despondently along the lines of, “We're really getting a taste of London weather, eh?”.
READ ALSO: Photo: Joingate/Depositphotos
But the French capital actually has a slightly higher average annual rainfall than its much meteorologically maligned British counterpart.
On the other hand, if you're lucky enough to live on the French Riviera, I understand why the thought of months of persistent drizzle as is common in much of the UK might provoke a horrified reaction.
And it doesn't stop there — some of the stereotypes that come up about Britain are of a more serious nature.
One such subject is the British education system which a lot of French people believe to be much worse than in France.
This is a strange one because it's hard to know where it comes from especially when Pisa education rankings often show that France is one of the countries among its OECD peers where inequality in schools is a big problem, with a strong relationship between performance at school and socio-economic background of the student.
Similarly, when the NHS comes up in conversation, the French will often say that their health system is indisputably much better.
And although the NHS certainly has its problems, what often seems to be forgotten is that it's completely free at the point of use. Photo: AFP
While in France there are ways for the poorest in society to claim their money back and see a doctor for a free at a hospital, most people have to pay in cash first, something which can put people off going to see their GP.
One friend who lives between Paris and London recently went to a French hospital to get stitches and when she told them that she'd probably have them taken out in the UK because that's where she was most likely to be in a week's time, the doctor shrugged his shoulders and said: “Well, as you wish, if you're willing to take the risk”.
Personally I haven't had enough experience of the French healthcare system to have an opinion on whether or not it is superior to the NHS but it certainly feels like Britain's health service has an unfair reputation in France.
And when it comes to the issues of Islam, immigration and integration the French often talk in a negative way about multi-culturalism in Britain and its “communautariste” approach, which when used disparagingly is the idea that the UK encourages people of different nationalities, religions or ethnicities to live in separate communities without needing to integrate.
They compare this to the French way which is the assimilationist model which they believe favours integration through the encouragement of common French national identity.
The subject of which approach is better has long been argued over but you do get the impression that some in France believe minority communities is the UK, notably Muslims, live in their own mini-states with their own laws.
When it comes to successful integration, in reality, the results don't feel that that different between the two countries.
And naturally that's the problem with a lot of cultural stereotypes — we're probably a lot more similar than we often like to believe.
Still, it can be fun — in moderation and with tact — to point out each other's peculiarities.