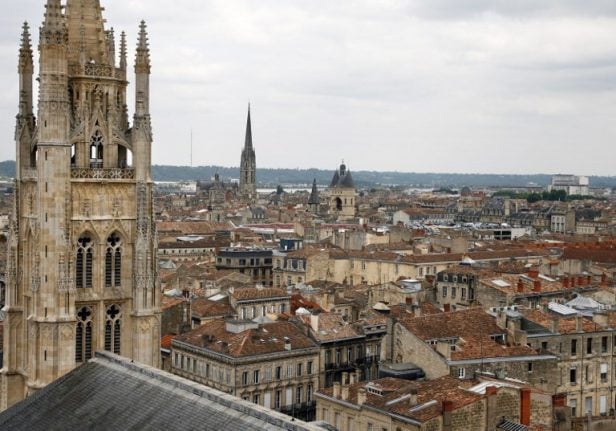 Photo: AFP
What's the best thing about living in Bordeaux?
Where to begin? Being 30 to 40 minutes from stunning beaches that can be enjoyed from May to late October each year. I especially love La Porge which can be reached via a morning bus from central Bordeaux.
The long summers spent picnicking, bathing and surfing on the beach make the wet winters (like we have seen this winter particularly) tolerable. Also the fact I enjoy all the pleasures of Paris (where I used to live) but at a nicer pace, with a more laid back life style and less overcrowding.
READ ALSO: (The beach at Arcachon, within easy reach of Bordeaux by car. Photo: AFP)
What's the worst thing abut living in Bordeaux?
Having just two or three employment options here as a foreigner, despite being bilingual and with plenty of qualifications.
Teaching, bar work and… well, more teaching! In all seriousness, it takes time to break into the Bordeaux community and to carve out a niche for yourself but I love Bordeaux and will never leave.
However, making the most of your skills and training can be a challenge when it feels like all Anglophones are pigeonholed into just being teachers who have to work for dreadful money for one of the franchise language schools that know your options are limited and may employ you for far less money than you expect.
The upside? You might get into one of the business schools where the pay and resources are generally much better and it makes you motivated as hell to create opportunities of your own and develop digital businesses that can be managed from anywhere.
Would you like to write a similar guide to the place in France where you live? Email [email protected]
READ ALSO: How the British have made south west France their home? What can you do in Bordeaux that you can't do anywhere else?
Enjoy the beaches most of the year, live in a thriving commercial metropolis that doesn't feel chaotic, drink the finest wine in the whole world and then drive for a couple of hours and be in Spain for tapas and sangria.
(If you live in Bordeaux and would like to join The Local, email [email protected] for a special 50% discount on membership.)
Are there really too many Parisians there?
Alarmingly it seems to be going that way. In the space of a few months, areas that were once affordable for locals are suddenly seeing a totally unprecedented price rise when it comes to both renting and buying property. The new TGV train to Paris has motivated a lot of Parisians to stretch their Paris pennies further and get more for their buck down on the coast. And judging by the apartment blocks going up at an alarming rate on the Rive Droite we should expect more of them in the coming months and years.
READ ALSO: What's the best thing about the region around Bordeaux?
Just how easy it is to discover great food and cute towns around the periphery that feel much further from the city than they actually are. It makes escaping for the weekend, either down to Biarritz, or the Charente for cognac and jazz, or the coast for Oysters and white wine, all the more inviting. Everything feels accessible and affordable. Even Royan, the single greatest example in France of preserved fifties design and architectural heritage, is just a drive away and definitely worth the visit. What's the best thing to do with kids?
The beaches with their surfing, sailing and watersports for kids, Bordeaux Lac for rowing clubs and swimming, exploring the city centre and its open spaces with amazing parks like Park Bordelais or Jardin Botanique (see photo below) where they can learn about ecosystems and wildlife, or discover the childrens' skate park at Darwin Eco-Center. What's the best restaurant in Bordeaux?
Depending on budget and mood Bordeaux is now a culinary power house for French and international food. For cheap and cheerful food, I love The Table Bordelaise on Rue Piliers de Tutelle tucked away in the back streets by the Opera House. But for something luxurious with a spectacular view it has to be The 7, on the seventh floor of the Cité Du Vin.
I have also heard nothing but rave reviews from friends who have eaten at Gordon Ramsey's restaurant at the Grand Hotel. Well worth trying, if time and budget allow.
What's the best bar in Bordeaux?
A surprisingly family friendly restaurant can be found on the ground floor of the Mama's Shelter hotel in central Bordeaux, five minutes walk from the cathedral. Its chic bar is the place to be seen on a Saturday night if you want to feel like you have stepped into Sex and The City circa 1998. I love the place for dancing and celebrating. Great cocktails are around 11 euros each but beware, if you want to get a seat head there early, around 7pm.
They also have a great roof terrace and table tennis in the basement if that third mojito makes you playful. There is also the roof terrace of the Grand Hotel which is open each summer and has spectacular views over the city (see below).
READ ALSO: Here's what's so brilliant about Bordeaux? (Photo: Fred Romero)
What's the best way to spend a sunny afternoon?
Start with a picnic in the Jardin Publique, then a walk along the quays to the Jardin des Lumieres and the water sculpture at Place de la Bourse. Watch the performers or kids splashing in the fountains in the summer sun. Then walk on down to St.Michel for ice-cream, yum.
And when it rains?
Cité du Vin (see pic below) for an all day wine adventure, or window shopping the gorgeous boutiques off Rue St Catherine for interiors and home decor, and if you have wheels get yourself to St Emilion (photo below) for a cosy lunch and good wine. Even in rain St Emilion is a remarkable place to explore, with its winding streets and monastery on the hill. (St Emilion – Dennis Jarvis/Flickr)
What's the best hidden gem Bordeaux has to offer?
Probably the amazing speak-easy cocktail bar on the boardwalk side of the Chartrons district called Symbiose. A secret back entrance behind the tapas bar reveals a cosy little hidden bar with great tunes and some adventurous cocktails.
Are there any particular character traits that belong to the Bordeaux natives?
Women in their fifties cycling to work in high heels. Women (and men) here take exceptional care of themselves and pride themselves on their presentation and I say that as someone who lived in London for years where fashion mattered. Also, the natives can seem closed off for a time, but if you stick around and remain friendly with them, you will be surprised at how they will open up to you in time.
Any places in Bordeaux where you would avoid?
The Merignac area around the airport is very industrial and built up with a mix of sprawling apartment blocks and suburban neighborhoods thrown in. It really is still an area that lacks cohesive personality and so if you find yourself out that way with little to do, perhaps awaiting a flight from the airport,  make use of the tram from town and check out the huge and very well serviced shopping mall Merignac Soleil.
Otherwise Rue Saint Catherine on a busy Saturday morning can be one person's heaven or another person's hell. It can get very full in town coming up to bank holidays or during the height of summer, so if venturing into town on a Saturday, try and get in early to secure convenient parking if needs be and aim to be exiting the city center by about 3pm to avoid traffic and congestion on the tram lines.
Avoid feeling obliged to take a coffee or lunch around Place de L'Opera unless you can afford to pay for the expensive view and people watching. Just a couple of blocks away in the alleys off Rue Saint Catherine you can find a treasure trove of bistros and little independent cafes popping up and reasonably priced. How good is public transport in Bordeaux?
Excellent, to be honest. I can use the TBM (Transport Bordeaux Metropole) app and find every bus I want, and they are always on time (insane after growing up in Dublin Ireland in the 80's, where the buses came once an hour and were always late).
Then there is the tram, the same one designed for Dublin in fact, which runs promptly every three to five minutes or every ten minutes on Sundays.
I also love the river boat bus which is also very prompt and is the same price as taking any other means of transport while also offering a gorgeous ride home at sunset along the Garonne river, after a long day at work.
Do you feel safe in Bordeaux?
It is probably the safest city I have ever lived in, but like any major city you just need to be realistic about going out at night. No wandering around late at night alone and no leaving valuables unattended, say at a bar or streetside cafe. But that is the same anywhere.
In fact for the duration of my years living here I have never encountered any animosity, or seen any violence, drunkenness etc which would lead me to change my habits or movements whatsoever. I have never experienced theft or felt any intimidation but it is worth noting that if you are the shy type and are exploring alone, some times the predominantly male-frequented bars around the Place de Bourgogne can sometimes seem a little intimidating, with wolf whistling and stares. But that can be easily ignored.
Also the area around the train station Gare St Jean after dark at one point was not the most inviting place, but after a massive refurbishment job recently, the area in general is vastly improved with extensive redevelopment going on, making it far more tourist friendly.
Describe Bordeaux in three words
Cultural, Cool, Creative.
Useful websites for people in Bordeaux:
The Town Hall
Gironde Prefecture
The Tourist Office
Invest in Bordeaux
Facebook groups: