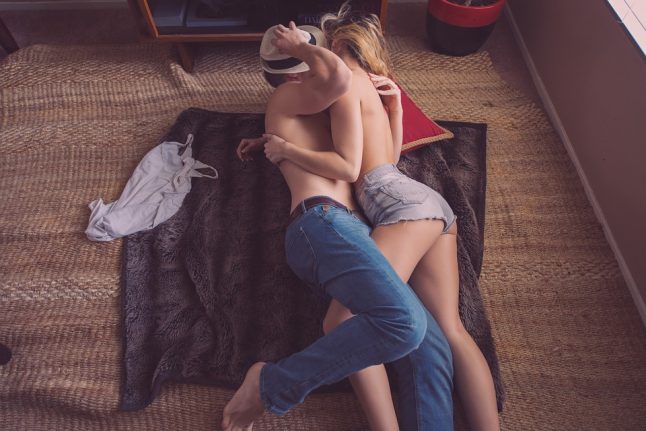 Photo: Pixabay
As we already know, internet searches often shed light on the cliches people have about the French.
Why are the French so thin? Why do Frenchmen smell? Why are the French always on strike? These are just some of the questions internet users regularly ask Google.
Another question internet users seem to be interested in (judging from those who search our own site) is whether the French and in particular the men are really obsessed by sex?
Nothing about the sexual behaviours of the French in general suggest they are abnormally sexually active, if surveys are to be believed.
For example the results of a 2014 Ifop study on the sexual habits of the French were a little bit of an anti-climax.
For example, the French make love once a week on average, with only nine percent having sex three times a week, and a quarter go for the whole week without “doing the wolf dance”, as the French would say.
READ ALSO: The survey suggested the average number of sexual partners in a lifetime in France is about 10, and 14 percent of 18-24 year-olds are still virgins.
However different surveys tell different stories and another one revealed that the average Parisian will have 19 sexual partners.
That same survey suggested 66 percent of Parisian men have had a one night stand and 44 percent of Parisian men admit to having slept with someone whose name they don't know.
The survey also suggested 16 percent of French people had had a threesome although that rose to 19 percent for Parisians and 8 percent (22 percent in Paris) have taken part in a sexual orgy.
But international surveys comparing the sexual appetites of different nationalities don't seem to confirm the idea that Frenchmen are any more obsessed about boum boum crac crac than their counterparts from around the world.
So why do people still think that Frenchmen are obsessed with sex?
French author and GQ columnist on all things sex and sexuality Maïa Mazaurette told The Local: “French men are neither more nor less obsessed than others – moreover, the international scale of the #MeToo movement shows that women are harassed absolutely everywhere in the world.
Mazaurette, who has written a book called The Revenge of the Clitoris, said among the French themselves it is the Italians and the Spaniards who have the reputation for being the most active Latin lovers.
“I’m under the impression that the French lover cliché is a tool which we use to culturally stand out, but watch out, because in France we talk about “Italian Lovers”, “hot-blooded” Spaniards, and South Americans “on fire”… We’re always looking for sexual exoticism in our neighbouring countries,” she said.
Mazaurette suggests the reputation in English-speaking countries of the French being ravenous for sex is more to do with the fact that they talk far more openly about it and it's not a taboo subject.
“In practice, the French are average in the world for frequency of sex, duration, consumption of pornography, and the type of sexual intercourse… nothing remarkable, and no national specialty.
“The only difference is that the French do not associate sexuality with morality much. For us, what we do in bed is not representative of what we do outside, and the boundaries between private life and public life remain very strong. If someone cheats on their wife or husband, that does not mean he or she is a bad person.
“In short, in France, we have sex exactly like everyone else, but we talk about it a little differently – and quite easily. That's all,” was her conclusion.
When asked Are Frenchmen totally obsessed with sex the website “Ask a Frenchman” suggested the same explanation.
“Puritanism never existed in France, and French people have the chance to be more or less free from the religious morality that plagues so many cultures, the American one included. Because of that, French people are more open about sex than many cultures.
“French people think about sex pretty much as often as anybody else on Earth, but those thoughts don't come with the same hoopla as in some other cultures.”

Dr Jacques Waynberg, a medical doctor, lecturer, writer and sexual philosopher described as the country's “leading sexologist” tells The Local the stresses of modern life are helping to put to bed any reputation Frenchmen might once have had for being the best lovers.
“Today, we cannot say that French men are champions of sexuality. It’s a very outdated reputation. Everything that we imagined, the fantasies about the jovial behaviour of the French, dates from a previous period.
“In the past the educated middle classes in France didn’t have financial woes, and contraception was finally made free. Since the 1980s and the Aids crisis sexuality has taken a big hit and sex has lost some of its charm. The party is over.

“Today, it gets even more complicated because your sex life now depends on your economic situation. French people's sex drive is affected by tension, overwork and financial insecurity,” he said.

And then there's modern technology with Frenchmen now just as likely to fondle their phones in bed as their partners.
One recent survey revealed half of French people preferred their smartphone to sex.
But perhaps the rather exaggerated reputation of the Frenchman's penchant for sex has been clouded over the years with the more accurate portrayal of Gallic men having a love and knack for romance.
Sean Rad, co-founder and CEO of dating app Tinder, portrays the French in a slightly different light, giving a specific importance to romance. (Photo: ALexander Baxevanis/flickr)
He told Grazia magazine that it is romance rather than sex that sets the French and Frenchmen apart from the rest of the world.
“The French are the most romantic,” he said pointing out that French users of the dating app will spend the most time talking to each other before meeting up, suggesting Tinder users in other countries are more likely to jump into bed with one another first and talk later.
“Love is a serious business in France, we know this,” he said.
And a Frenchman's love for romance is often what stands out when foreign women begin dating them.
France-based bloggers Rosie McCarthy from “Not Even French” and Kate Lewensten from “Unintentionally Frenchified”, who know a thing or two about dating Frenchmen, put it like this: “The French are the absolute masters of public displays of affection (PDA).
“It doesn’t matter if the setting is a candlelit dinner or the vegetable aisle at the grocery store, any place is a good place to steal a kiss or playfully pinch a rump. If you’re thinking steamier than that, no one bats an eyelash at the couples rolling around in the park on a hot summer's day either.
“The best part about French PDA is that Frenchmen are as keen on showering you with attention as women.”
So in conclusion let's stop confusing the master of PDA with being masters of SEX.
Send your burning questions about France to [email protected]