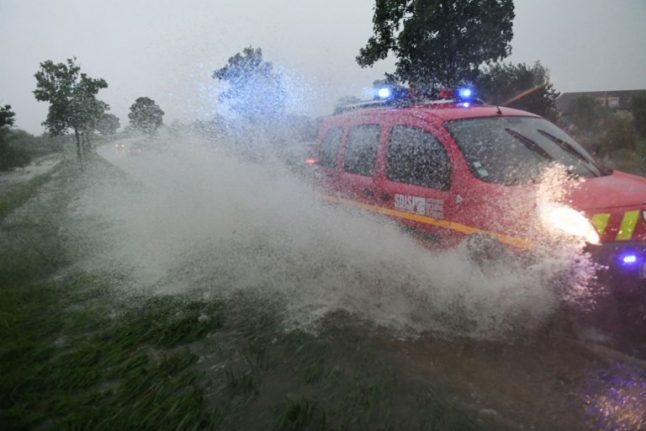 Since mid-May France has been battered by a series of storms that have affected most of the country.

Departments have taken it in turn to be on alert as thunder, lightning, hail showers and downpours have repeatedly swept across the country.
Some areas like Finistere in Brittany and Bas-Rhin department in the east have seen severe flash flooding. On Tuesday a 35-year-old man was found dead in his car in Eure, Normandy after it was submerged during flooding. The area had been hit by storms on Monday evening. Even Paris saw Metro stations and streets flooded in recent weeks.
To put the stormy period in context, the month of May saw 182,000 lightning strikes touch the ground. That's double the previous record for a month of May.
Two of those strikes hit the Eiffel Tower in Paris and made for some impressive photos. Watch the video here. There has been a deluge of stories about a week's rainfall falling in just a matter of minutes.
Vineyard owners in the south west and the Champagne region in the north east have seen their crops destroyed by hail storms an downpours.
And the stormy period is not over just yet.
On Tuesday 28 departments were placed on storm and flooding alert in central and southern France. Map: Meteo France
Meteo France is warning that the storms could be particularly violent and be accompanied by hail showers and severe downpours particularly in the departments of Auvergne, Ain and Isere.
Gusts of wind of up to 90km/h can be expected.
Forecasters say the stormy period is set to last throughout the week, the coming weekend and even into next week so it's worth keeping an eye on the alerts to see if your department is in for some extreme weather.
“We can't see any kind of lull,” says Météo France forecaster Etienne Kapikan who described the weather situation as “blocked”.
The maps below show the storms forecast for Wednesday and then Thursday across France. Méteo France have forecast storms to continue to lash France into the week of June 11th to 17th.
Forecasters blame the intense and lasting stormy period on a clash between high pressure weather from the north and low pressure from the south.
Northern Europe has experienced above average temperatures for May, which has helped create an atmosphere more likely to turn stormy, said Kapikan.
The unseasonably warm weather that has baked Germany in recent weeks has helped boost temperatures in France, particularly in the north and east, which has resulted in storms given the humidity in the atmosphere.
The temperature for May is 1.3C above average and 2C above average for the north of the country.
On the other hand departments in the south west have experienced an average month of May in terms of temperatures.