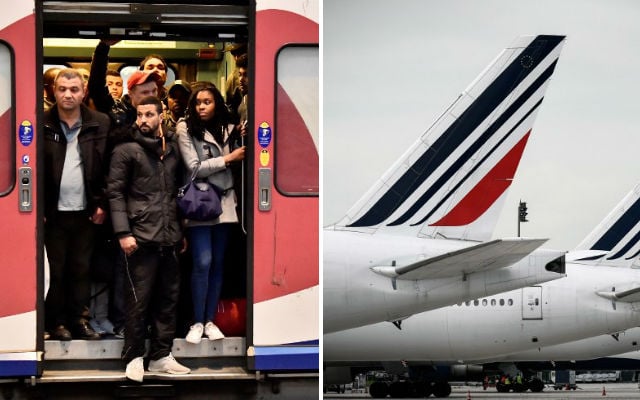 Photos: AFP
The summer ahead could be a grim one for travellers in France, if some trade unions have their way.
In a meeting with Air France chiefs on Monday, union heads threatened the company with a “turbulent summer” after already having mounted a series of strikes throughout the spring that has cost the company hundreds of million of euros.
The threat comes just as the company has brought in an interim president Anne-Marie Couderc, who will fill the role until September when the role will be filled permanently.
And unions haven't wasted any time in saying they are united in their determination to continue the strike action in order to secure the 5.1 percent wage increase they're after.
“There is unanimity among the unions to continue the strike,” Karim Taïbi from the hard-left Force Ouvriere (FO) union told the French press on Monday.
READ ALSO: Photo: AFP
Unions have criticised the new leadership at Air France for not responding to the fact that the pay deal was rejected by employees at the airline.
“The current management is losing the little credit it has left by refusing to draw conclusion from the vote,” said Christophe Malloggi, another representative from the FO union
According to him, “The board of directors is shirking its responsibilities. They will have to accept the turbulent summer ahead.”
Couderc is due to meet the unions on Friday, according to some reports, but the interim chief may not have a mandate to negotiate on the salary dispute.
And if things don't go to plan, new strike dates could be announced the same day.
The airline's previous boss Jean-Marc Janaillac announced his resignation at the beginning of May after staff at the carrier's French operations rejected a pay deal aimed at ending weeks of strikes.
In a consultation with Air France employees, 55 percent of staff rejected the wage deal proposed by the company's management.
Meanwhile, there could also be turbulence on the tracks with some rail unions vowing to continue their rolling strikes into the summer in protest against the government's proposed reform of the rail sector.
According to some unions, the two-day rolling rail strikes, which started at the beginning of April and are set to continue up until June 28th, could be extended into July and August. Photo: AFP
The more militant CGT and Sud Rail unions have said the possibility of prolonging the action into July and August was becoming increasingly likely. Another more reformist union, the CFDT, offered some hope to passengers by suggesting it was “looking for a way out” of the crisis.
“We will know this week [if the strikes will continue in July] We think certain rail unions will continue with the strikes,” one Paris-based French rail worker told The Local on Tuesday.
“But the number of delays and cancellations will be much less than we have seen,” he said.
The one positive note for the public is that the the number of rail workers joining the strikes in recent weeks has been steadily decreasing and as a result the disruption has eased.
But a large number of regional and Intercité trains are still being cancelled due to the high numbers of train drivers who are striking.
However head of France's national rail company SNCF Guillaume Pepy has tried to reassure users, saying he does not believe there will be summer strikes.
He said the company will ensure trains for people taking exams before the summer break and said the strike would not continue during the summer.
“There will be no strike this summer because rail workers are responsible people,” said Pepy in May when the possibility was first mooted.
Rail unions object to plans to strip new SNCF recruits of jobs-for-life and early retirement, part of Macron's bid to reduce the SNCF's nearly €50 billion of debt.
The strikes have caused major travel headaches for the 4.5 million daily rail users in France although in general they have lost steam over the months of action.