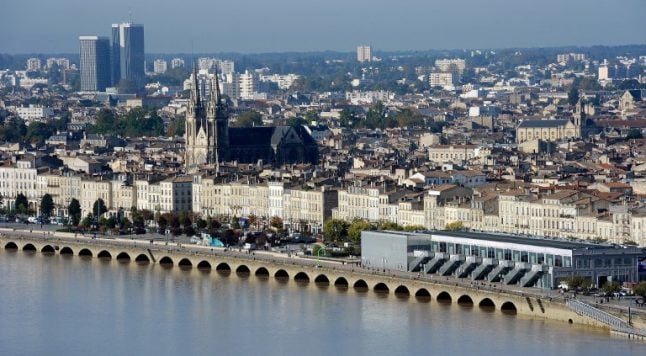 Photo: AFP
Driving along the majestic Garonne in autumn 2017 en route to the city centre of Bordeaux, you would be forgiven for thinking you were in Dublin circa the Celtic Tiger period of the nineties or Canary Wharf in the eighties.
Where once the “Sleeping Beauty of the South West” boasted grim warehouses overlooking under developed docklands, now Bordeaux has been transformed – practically beyond recognition to many residents.
The result? The city itself and the surrounding satellite towns and suburbs of the ‘Nouvelle Aquitaine’ have experienced what has been described by some estate agents and developers as the most significant period of urban growth in housing since Bordeaux's illustrious mayor Alain Juppé took office more than ten years ago and woke the “Sleeping Beauty”.
READ ALSO: I myself arrived in the city in January 2014 with no fixed job, no apartment, no plan but to get on the housing market. So, having spent years in London, where property prices doubled between 2009 and 2014, I felt ready for the challenge of discovering what the housing market in Bordeaux could offer.
In the city centre, in more upmarket neighbourhoods, rent prices suddenly seemed reasonable for a two-bed at €700/month, after paying the equivalent of €1800/month back in London. While in the more student-friendly areas of St.Michel and Victoire, at the other end of town, they were lower still.
For two years we watched as the docklands of Bassins à Flot (see video below) began to sprout modern looking, dramatic new high rise apartment blocks – it seemed a new one went up each month.
Then the development Gingko, the ecological neighbourhood, by Bordeaux Lac, on the edge of the commercial centre of the city, began to explode with building sites, new road networks, new tram expansions and infrastructure. All within a matter of months.
Fast forward three years and suppliers from some of the biggest crane companies in the Aquitaine, RIWAL and LOXAM serving all these developments, tell me that January 2016 was their busiest period ever. I’m not surprised, even driving along the formally grubby and under-developed Rive Droite the cranes glide through the sky from horizon to port.
What’s more, estate agents tell me that in 2016 alone, house prices in Bordeaux rose by an unprecedented 11 percent. Good news for them.
The city is swelling in every direction to make way for all the new money and the expansion that Juppé (pictured below) welcomes. His goal? To see the population of 600,000 in the metropole reach a million, with a competitive property market to match. After the birth of our daughter, my husband and I knew the city centre was no longer going to work – ancient buildings, crumbling electric systems, archaic plumbing, parking tickets by the dozen as more cars competed for the same spaces.
We wanted quiet, a garden, parking – the usual stuff. We picked a modest price range in September last year, bearing in mind that the comparative base of the Aquitaine property market is still significantly lower than say London, where a two bed in the district of Camberwell this very month can set you back approximately £500,000.
All the estate agents say the same thing. Buyers are falling into quite distinct categories today.
The luxury specialists agents are focused on the Asian and foreign market share, who want to buy for investment in the wine capital of the world.
Hence the agents all need to become fluent in English which you see when you count the numbers attending English classes around town. Then you have the Parisians, who have caused somewhat of a stir this summer heading to Bordeaux via the new two hour TGV train, in the hope of better property at half the price while still commuting to work in the north. Finally, you have the working Bordelaise – the rest of us.
We explored areas around the still under-developed Rive Droite and by sheer miracle secured, after one thirty minute viewing and three months of paperwork, a brilliant first home that ticked all the boxes and then some.
Despite Juppé's passion and obvious dedication to the prosperity of Bordeaux as a region, the question remains: Will the exponential growth of the town, described now as the most desirable place to live in France among French people, be met with a housing infrastructure that can keep up?
Will the boom bring new vitality to suburbs on the periphery like Bassens, Carbon Blanc or St Jean-d’Illac out past the airport? Will students face the crisis in accommodation experienced elsewhere in Europe like right now in Dublin, Ireland?
Will the city centre become another gentrified enclave for the out of town visitors and new money AirBnB buyers?
We will see. For now, from my office in the former military barracks of Darwin by the banks of the river, one thing is clear: the cranes are all around us now, a veritable jungle of steel, as new, glamorous property placards advertise developments in every direction on the once quieter side of town.
For his part, Juppé has already forewarned that the associations, artists and clubs who call Darwin home will soon enough have to move out and make way for the investors and buyers who want a river vista.
A fitting analogy for things to come? Time will tell.
by Stephanie Irwin