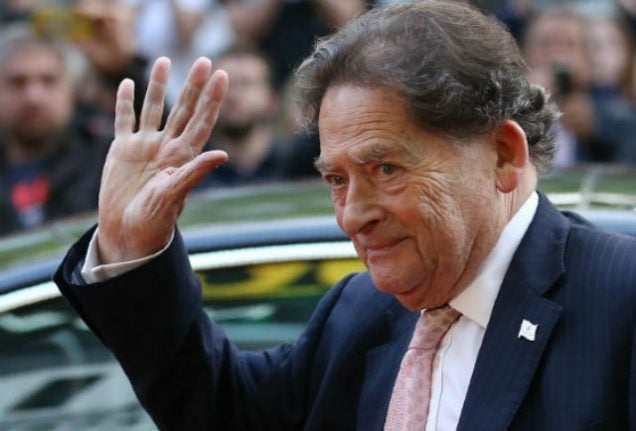 Lord Lawson, the former chair of the Vote Leave pro-Brexit campaign and a long-time immigrant in France, has like many of the 150,000 Brits in France, decided to apply for a carte de séjour residency permit.

The permit, which is not obligatory for Brits, is seen as a way of avoiding complications and paperwork after Brexit, but news of Lawson's application led to accusations of “hypocrisy” among remain voters in France and Britain.

A petition has since been set up asking French President Emmanuel Macron to turn down Lawson's application.

The campaign launched on the Petition Site had garnered almost 2,000 signatures by Monday morning.

A statement on the site reads: “To President Macron.

“We, the disempowered Remain voters of the UK, aggrieved by the outcome of the EU Ref, which has denied us the right to live and work freely across the EU, ask the President to deny a carte de séjour to Nigel Lawson after the UK leaves the EU.

“As responsible citizens of the EU, we are mindful that the rank hypocrisy of Lord Lawson, chairman of the 'Vote Leave' campaign makes him an unsuitable candidate for French residency and he should therefore be returned to the UK. We do not wish to inflict his person on our good French neighbours.”

Comments by some of those who had signed summed up much of the anger towards the Brexiteer.

“Nigel Lawson is a hypocrite. As a leading Brexiteer he should remain in the UK and face the destruction he and his ilk have caused to the UK economy,” read one.

This applicant must be refused a residence permit in France for reasons of public safety (EU Directive 2004/38 / EC, 29 April 2004, paragraph 22). The plaintiff has caused enormous damage to the security of his own Country & should not be allowed to do so in France…” 2/2 ???

Petition to stop Lord Lawson having the rights and freedom to live in the EU that he has denied me, my children and all future generations across the U.K. why should he get to destabilise the U.K. & EU and sail off into the sunset https://t.co/8eNR8EZLbv

Angry tweeters also tried to get campaigns going on Twitter under various hashtags in a bid to pressure French authorities to turn down his application.

Some residents have even taken the step of calling Lawson's local prefecture in the Gers department urging officials to reject his application, which they have not yet received.

However a spokesperson for the Gers prefecture, located in the town of Auch, told The Local that all opposition to Lord Lawson's application would, as expected, be ignored.

“We did receive a call saying we shouldn't give him a residency permit but don't take this into account,” the spokesperson said. “Each citizen has the right to apply.

“We respect the rules and the guidelines [of the application process] and don't take into account calls from people who say you shouldn't give him a titre de séjour (residency permit).”

Lord Lawson himself responded to the furore around his intended application by telling the BBC: “It is well known that I live in France and have done so for many years and have referred to this in the House of Lords and elsewhere.

“It was the French authorities who told me that I should apply for a carte de séjour. Nothing else has changed.”

Brits in France are now being urged to apply for a carte de séjour by campaigners, France's Ministry of Interior and the British Embassy in Paris.

It is believed that possession of one will help avoid problems, paperwork and a lot of time and hassle when Britain does eventually leave the EU (see link below for more details).