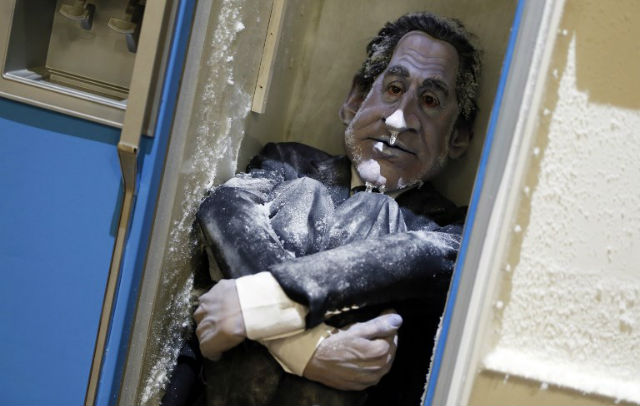 A puppet of former President Nicolas Sarkozy as seen at the Palais de Tokyo museum in Paris. Photo: Kenzo Troubillard/AFP
Three years after Vincent Bolloré, the billionaire owner of Canal+, first tried to axe the satire show for going too far in its mockery of the French establishment, the channel told AFP the curtain was finally coming down.
Bolloré was forced to bow to a public outcry from the show's supporters in 2015, but this time there will be no reprieve, Canal+ said.
The latex puppets had become a fixture of prime-time television since their debut in 1988 with merciless send-ups of politicians and pundits, athletes and actors.
Inspired by Britain's biting 1980s puppet show “Spitting Image”, the Guignols took off during the 1990-1991 Gulf War, not least thanks to over-the-top reporting by a flak-jacket wearing Sylvester Stallone.
He would become a perennial favourite, alongside ex-president Jacques Chirac, routinely seen indulging in his penchant for Corona beers — when he wasn't the masked hero known as “SuperLiar”.
French superstar rocker Johnny Hallyday's public image as an empty-headed entertainer was also forged on the show, while Osama bin Laden would ask about his chances of getting an Oscar award for his “action movie of the year”.
Ex-president Nicolas Sarkozy was also known to hate how the show mocked his height of 5 feet 4 inches (1.66 metres) — since viewers would only ever see the top of his puppet's head on the show.
'We were expecting this'
More than three million people watched the 10-minute programme daily at its height, giving it outsize influence on the nation's cultural and political pulse.
But their barbs could draw the ire of some of their subjects, not least Vincent Bolloré, the billionaire industrialist who took control of Canal+ in 2015 after becoming the largest shareholder in its parent company, the media
conglomerate Vivendi.
Criticising the show's writers for an “abuse of derision”, Bolloré quickly signalled his intent to axe the show with press suggesting he was acting on behalf of Sarkozy.
The businessman eventually backed down, but only after replacing longtime writers and taking a noticeable edge off the puppets' humour. He also ended the show's free-to-air viewing to make it available only to Canal+ subscribers, a move that further pushed down audience levels.
Since then, many fans as well as the show's production team suspected the
curtain's fall was only a matter of time.
“We were expecting this, there were rumours, people quitting,” said Yves Lecoq, one of the programme's veteran voices, adding that so far he had heard nothing official from Canal+.
The news quickly became the top trending topic on Twitter in France, with many lamenting the show's demise while sharing their favourite sketches.
Others, however, made no secret of their delight.
“What joy! Well done!” tweeted rightwing politician Nadine Morano, an outspoken Sarkozy ally who was regularly targeted by the show. “No funeral, straight to cremation! No wreaths or flowers, only a plaque saying stupid and mean. Good riddance!”