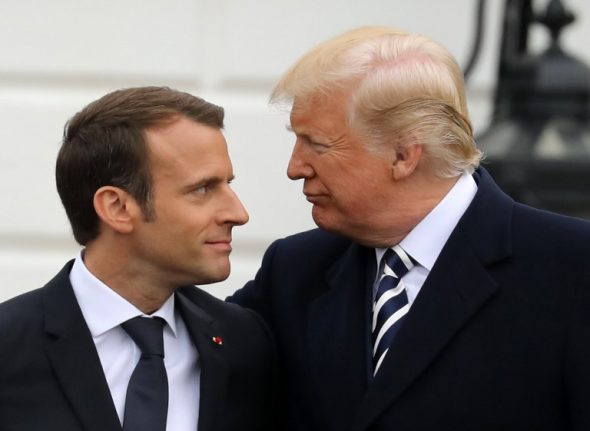 Photo: AFP
The phone call between the French president and his US counterpart came after the US announced the steep metals tariffs would be imposed on the European Union, Canada and Mexico as of midnight (0400 GMT Friday).
Macron, who has forged a good relationship with the US president, spoke to Trump on the phone, urging him to take part in negotiations with the EU, China and Japan to strengthen the rules of the World Trade Organisation.
He called the decision to impose tariffs a “mistake”, warning that “economic nationalism” would penalise everyone including the US.
READ ALSO:
Earlier Thursday Macron told journalists at the Elysee Palace that he deplored the American decision.
“I think this decision is a mistake in many ways because it responds to existing international imbalances in the worst way — by breaking up and creating economic nationalism.
“And nationalism is war. That's exactly what happened in the 30s,” he added.
French Finance Minister Bruno Le Maire said Thursday that France will refuse to enter into trade talks with the United States while punishing steel and aluminum tariffs are in effect.
“We refuse to negotiate under pressure,” Le Maire told reporters while en route to a Group of Seven meeting in Canada. And “being hit by the tariffs will not help us to open the door to any kind of negotiation.”