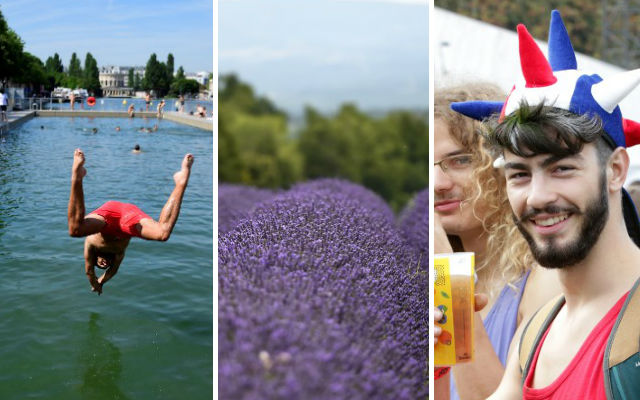 A rehearsal shot from Nuits de Fourvière in 2015. Photo: AFP
Les Etoiles de Mougins: June 2nd-3rd, Mougins
Are you a devoted foodie? If so, head down to the pretty village of Mougins in south of France this month.
Each year around a hundred chefs from around the world descend on the historic village to wow the general public with their culinary skills. Les Médiévales de Provins: June 9th-10th, Provins
History lovers, this one's for you. The historic centre of Provins, which has been named a UNESCO site, comes to life with a reconstruction of medieval life in France.
Parades, musical performances and a Medieval Ball are just some of the events on the programme. Children can have their faces painted, get creative in workshops and learn about the history of this north-central region of the Seine-et-Marne during the Middle Ages.
This year's theme is 'Humans and Beasts'. Les Médiévales de Provins. Photo: fgr77/Flickr
Le Mans 24 hours: June 16th-17th, Le Mans
Arguably one of the most important (and the world's oldest) car races on the automobile calendar, Le Mans 24 hours is the ultimate test of endurance, speed and ability, for the drivers and vehicles involved.
The event is just one leg of the Triple Crown of Motorsport, which includes the Indianapolis 500 and the Monaco Grand Prix.
The course where it is held is The Circuit de la Sarthe, the longest race course in the entire world. Drivers race in teams of three, and push their vehicles to their absolute limits.
Fete de la musique: June 21st, Whole of France
What better way to celebrate the arrival of summer, than a whole day of concerts and musical performances? Oh…and they're all free.
Every genre of music will be ticked off with gigs taking place across the whole of France.
Artists and groups will take to various venues as well as the streets in participation, so it will be difficult to miss. People dance in the street during Fete de la Musique 2017. Photo: AFP
Paris Jazz Festival: June 30th-July 22nd
Over eight weekends from mid-June to the end of July, jazz will take over the Parc Floral de Paris — a botanical garden with an artificial lake and pavilions within the Bois de Vincennes in the city's 12th arrondissment.
Music lovers will be able to take advantage of their beautiful surroundings as they watch open-air performances encompassing jazz, world music, soul and blues.
The festival also holds musical games and workshops every afternoon, as well as concerts on the “Jazz Barge” on selected dates.
Arles photography exhibition: July 2nd-September 23rd
The Rencontres d'Arles is an annual summer photography festival founded in 1970 by the Arles photographer Lucien Clergue, the writer Michel Tournier and the historian Jean-Maurice Rouquette.
The festival has gained international recognition in part because the works exhibited have never been seen before by the public.
Every summer since 1970, over the course of more than forty exhibitions at various of the city's exceptional heritage sites, the Rencontres d'Arles has been a major influence in dissiminating the best of world photography and playing the role of a springboard for photographic and contemporary creative talents.
In 2016, the festival welcomed 100,000 visitors. Lavender fields in Provence. Photo: Ming-Yen Hsu/Flickr
Lavender Festivals, Provence: Various dates
For lovers of lavender, summer is the natural time to visit Provence. The fields area sea of purple and you can take in some of the fragrant lavender festivals dotted around the region.
Remember that although the flowering period extends from mid-June to mid-August, climate and altitude can affect these dates.
The Avignon Festival: July 6th-27th
Founded in 1947, the Avignon theatre and performing arts festival has established itself over the past 70 years as a key fixture in France's cultural calendar.
In a packed programme of more than 60 events, visitors can enjoy shows, readings, exhibitions, films and debates.
Paris Plages: July and August
Every summer, the Seine doubles up as a seaside resort complete with palm trees, deckchairs and ice-cream vans. The brainchild of Bertrand Delanoë, a former Socialist Mayor of Paris, Paris Plages began as an initiative to give some summery respite to weary Parisians unable to escape the sweltering city during the hottest months of the year.
Since its inauguration 17 years ago it has gone from strength to strength. The project's centrepiece is a beach stretching through the beating heart of historic Paris from the Louvre to Pont du Sully; there is also another, calmer beach area at Bassin de la Villette with a water-sports complex and a library. People plunge into a swimming pool at the Bassin de la Villette as part of the Paris Plages summer event. Photo: AFP
Bastille Day: 14th July
On France's national day celebrations take place all over the country and naturally no expense is spared in the French capital.
On the 13th and 14th, Paris fire stations are opening their doors to revellers for the traditional 'Bals des Pompiers' in celebration of France's national day.
On the 14th, the annual military parade will march down the Champs-Elysée in the presence of president Emmanuel Macron as well as a huge flag-brandishing crowd. Later on, a kaleidoscopic fireworks display launched from the Eiffel Tower and the Trocadéro gardens will light up the skies of Paris.
La Villette Open-Air Cinema Festival: July 18th-August 19th, Paris
Every year the grassy Parc de La Villette in the 19th arrondisement opens its gates for Paris' largest open-air cinema festival. It's the perfect way to enjoy a balmy summer evening in Paris, and, best of all, is totally free (unless you to opt to pay for a deckchair).
This year's theme is “If we sang?” with a programme that offers up an eclectic mix of song and dance movie classics as well as more recent films, such as La La Land and Frances Ha. Photo: Pierre-Emmanuel Rastoin + La La Land © SND, tous droits réservés. BenJeffLaurent /TROÏKA • Créa Sophie Lavoie/EPPGHV
Fete du Bayonne: July 25th-29th
The Fêtes de Bayonne in the Northern Basque Country always draws huge crowds, and this year promises to be no exception. For five days at the end of July, the streets of Bayonne brim and bustle with exuberant parades, Basque food and music, tamborradas drum displays and thousands of participants dressed in red and white.
There is bullfighting however, so the festival does court controversy and it might not be for everyone.
The festivities begin when King Léon, the festival's mascot, stands on the balcony of the town hall and flings the city keys into the crowd thronging below. This kickstarts five days of non-stop celebrations, which end on Sunday evening with a grand fireworks show and the departure of King Léon for another year.
Interceltique Festival: August 3rd-12th, Brittany
Thousands of musicians are set to descend on the town of Lorient in Brittany, western France for the annual InterCeltique festival. Brittany is one of the six “Celtic nations” where Celtic traits have survived (the others are Cornwall, Wales, Scotland, Ireland, and the Isle of Man).
Expect Celtic music in various styles, including traditional, classical, folk, jazz, and even rock. All aspects of Celtic art will be explored over the ten days, with writers, film directors, painters and lecturers on hand. Rock-en-Seine 2017. Photo: AFP
Fête du Cassoulet: August 22nd-26th, Aude
Who doesn't love a good cassoulet? Luckily, the name of this festival doesn't deceive, with over 40,000 varieties of the delicious French specialty on offer (learn how to cook it here).
But that's not all there is to it, Fete du Cassoulet also offers up a hearty dish of musical acts and sporting events.
Get an idea of what to expect from the video below. Bon appetit!
Cabaret Vert: August 24th – 27th, Charleville-Mézières
‘The head in the stars, the feet in the Ardennes', is the tagline for this arty festival in the Champagne region of France. Expect theatre performances, art workshops and film screenings, alongside performances by American blues musician Seasick Steve, American DJ and record producer Felix Da Housecat and Curtis Harding.