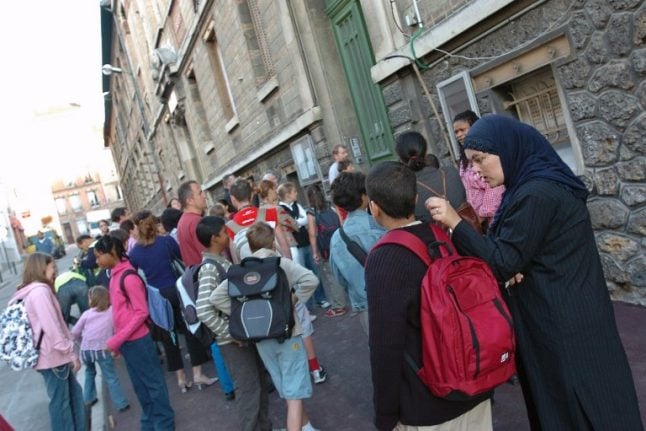 Photo: AFP
This week, every teacher in France received a copy of the government's new secularism guidelines for French schools.
The whopping 80-page report, which is twice as big as its 2015 predecessor, aims to help teachers apply the principles of secularism (laicité) in school and deal with any problems when they occur.
Strict laws on secularism apply to the country's public schools ever since France became secular when the church and state separated in 1905.
But as France struggles to balance its cherished ideal of 'laicité' with the practicalities of an increasingly multicultural society including Europe's largest Muslim population, these tensions sometimes spill over into the nations schools.
“You can't prevent all the problems that may arise,” French education minister Jean-Michel Blanquer told L'express. “You also need to bring answers, explain things and hand out punishments if necessary whenever secularism is threatened and when these problems couldn't be prevented. On these questions, we have to make it clear what is expected and what is an offense, so that the rules are clear.”
In 2004, after a series of incidents including the case of three schoolgirls being banned from schools for wearing Muslim headscarves, France introduced a law against all “ostentatious” religious symbols – including Islamic hijab headscarves , the Jewish kippah and “large” Christian crosses – in classrooms. But applying the rules can be a minefield for teachers, Blanquer explained.
“Teachers sometimes struggle when faced with situations they don't know how to deal with,” he said. “To avoid this uncomfortable situation, two actions are necessary. First of all, there is training. Teachers must be given a clear body of information both regarding content and the right attitude to take, for example when a science is questioned in the name of religion. Secondly, teachers musn't feel alone.”
Here are the six top rules from the government's new manual:
Medical certificates:
If a female student cannot go swimming, do gym or another sport on religious grounds and has a doctor's certificate to prove it, schools will now be able to ask for a second opinion from the school doctor.
“Selective absenteeism for religious reasons will not be tolerated. For physical education, medical certificates – which are thought to be suspicious – will be reviewed by the school doctor”, the manual states.
Rules of politeness:
Religion can never be used to justify breaking the rules of equality between men and women. If a member of staff refuses to shake hands with a woman for religious reasons, or does want to be managed by one, he will be sanctioned.
Sex education:
The manual reminds teachers that sex education is obligatory in schools, from primary throughout secondary. But despite the 2001 law stating this, sex education sometimes isn't taught at all, or very little, because teachers don't want to, or parents or pupils contest it. Muslim mothers on school outings:
Muslim mums who wear the hijab headscarf have frequently been banned from accompanying their children on school trips in France.  While they are not actually banned by the law there have been various attempts to do so and there is much confusion around the matter.
The Education Minister has moved to clarify the matter. Mothers who wear the veil or other religious symbols are allowed to accompany their kids' class, as long as they do not “preach” their religion, the manual said.
Religious symbols and long skirts
This guideline expands on the 2004 law that bans 'ostentatious religious symbols' in schools: “any sign or outfit which isn't explicitly religious can be banned if it is worn in a way that isn't merely for looks but to show belonging to a particular religion”.
Pupils who wear long skirts in dark colours for religious reasons and who refuse to change their outfits, or who persistently wear bandanas to cover part of their heads as a form of  hijab and refuse to take them off would be breaking the rules.
There have been numerous cases in recent years of schoolgirls in France being sent home by the headteachers, who considered that their long skirts were an ostentatious religious symbol. Celebrating Christmas and other religious festivals:
Religious festivals like Christmas are not a big deal in French schools, as – being secular – such events are banned, although it depends on how they are celebrated, the manual explains.
The new guidelines state that “secularised festivals, like Christmas can be celebrated” as long as they are not used for worship of any kind, including in the presentation or decoration.