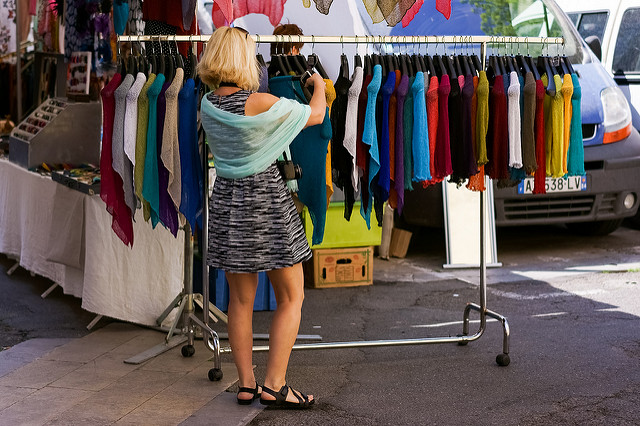 Photo: X1Klima/Flickr
How to dress like the French is the subject of many fashion magazine articles, Google searches and — for a lot of foreigners in France — hand-wringing, as they find themselves living alongside people who are lauded worldwide for their enviable sense of style.
Everyone has an idea of what French style is — whether it's Brigitte Bardot in a Breton-striped top, an old Frenchman playing a sun-soaked game of petanque in a beret or the impossibly slim Parisian woman dressed head-to-toe in black.
To many, one thing is for sure — whatever the French are doing, they're doing it dressed stylishly.
French women are praised for their ability to be chic at all hours of the day without spending hours and hours getting ready.
And British and American women are often compared unfavourably for wearing too much make-up and trying desperately to keep up with the very latest trends — even if they're not suited to them.
READ ALSO: Of course, some ideas about how the French dress are a little outdated — and exaggerated — to say the least.
And for most foreigners who come to live in France, it's not quite the shock to the system that they might have been expecting if they'd believed all the hype.
Nevertheless, just as many foreigners who make their lives here are likely to adopt French eating and drinking habits, there are some whose appearance will become more French the longer they're here.
Caitlin Pawlowski, 33, originally from South Carolina in the US, lives in Clermont-Ferrand in central France and says she has noticed a gradual shift in her appearance since she moved here three and a half years ago.
“We tend to wear bright colours and dresses because the weather is so warm [in South Carolina],” she tells The Local.
“But I've always had a style that has tended to more neutral colours and classic pieces and so I fit in in France,” she says.
This comment on the lack of colour worn by the French will come as no surprise to any regular users of the Paris Metro, for example, where you'll be greeted by a sea of grey, black and, for the more adventurous residents of the French capital — brown.
This is a sharp contrast to London, where a lot of people wear bright colours and prints without any qualms and pride themselves on having an adventurous dress sense.
But it's not just her clothes that have changed, says Pawlowski, adding that since moving here she's also been wearing less makeup — something else people frequently associate with French women's capability to look effortlessly glamorous. She also said that in France she believes there is generally a higher standard of style. For example, you can't get away with throwing on some jogging bottoms and a sweatshirt even if you're just going to the supermarket or to pick up the kids from school.
In fact, foreign women frequently comment on how stylishly French mothers are attired — even when they're picking up their kids at school.
And it's not just women who are affected by the different style in France — men also find themselves adapting, with Pawlowski saying that her husband's jeans have gotten “progressively skinnier since moving here”.
In fact, many readers contacted us to tell us how they had been influenced by French style, saying that they'd added typically French touches such as a big scarf or foulard to their look, as well as stocking up on Breton tops and lots of black items.
“I have acquired more Breton tops than is strictly necessary and I do tend to turn up the bottom of my jeans à la française,” says Chris Balchin from the UK.
Meanwhile, American Lynda Fory Stevens says: “No béret…quelle horreur! But black, lots of black and don't forget the mandatory scarf….but I've been here forever….its when I go back to the US that I feel different!” 'Make cheap clothes look expensive…'
So, where does this ability to and reputation for dressing well come from?
Well, Australian journalist Annette Young, told us she had good training in how to dress for life in France from her French mother.
“Having a French mother (not easy growing up in Australian suburbia, let me tell you!!) meant I already had a fair share of striped t-shirts in my cupboard before moving to Paris,” Young, a presenter at France 24 in Paris, tells The Local.
“But now I have at least four times the number. Not to mention, a decent trench coat and a vast collection of scarves for all seasons.”
Young also joked that she now has a “master's degree in scarf-tying” and a “variety of overcoats for all temperatures”.
“As my late Parisian mother would tell me, always make sure you have lipstick on and 'may you always be a woman who makes cheap clothes look expensive and not the other way around'.”
La Parisienne on a pedestal
What drives foreigners to adapt how they dress is another question. Is it pressure from society as a whole? Or rather foreigners feeling that they want to fit in with their new surroundings?
“There isn’t societal pressure so much as there is contrived norms as established by the media that I had been exposed to,” Lindsey Tramuta who has lived in Paris for 11 years and runs the Lost in Cheeseland website, tells The Local, adding that years of messaging in fashion and women’s magazines “put the Parisian woman and her supposedly innate sense of style and good taste on a pedestal”.
To back up Tramuta's point, a quick Google search of “how to dress like…” is followed by the words “a Parisian” as the top suggestion followed by “… a French woman” and “a French man”.

She says that while she previously though she was well dressed, put together and had a sense for colors and prints — “in Paris, I was suddenly hyper aware of how much of an outlier I was and that, I think, was purely when I was juxtaposed with an entirely different sense of style.”
“I was heavily influenced by local style, fashions, trends, and quickly felt overwhelmed by a feeling of urgency to adapt to it as closely as I could,” she says.
“It took me a long time to stop trying to adapt and to embrace what made me feel comfortable and made me feel like ME, not a version of myself. Rather than trying to adopt the same styles or brands, I learned to listen to myself,” she says.
READ ALSO: Inspired by the film “Black Swan”, Gaultier’s avian creations doubled as a prelude to the post-show launch of Kokorico, a musky men’s fragrance, down the Rue Saint Martin from his atelier in central Paris.

One of Gauthier’s model muses from the 1990s, Quebec-born Eve Salvail, instantly recognisable with her tattooed shaven scalp, returned to the runway in a “3D corset” that spilled snow-white silk from the bosom.

“I just walked for Jean Paul Gaultier Haute Couture Show in Paris, after 15 Years of not modeling!!! It was exhilarating!!!!” exclaimed Salvail, now a New York-based DJ, on her Twitter account.

Spanish luxury goods group Puig took over Hermes’ majority stake Gaultier’s successful house in May, but the renegade designer — subject of a major retrospective in Montreal this summer — remains its creative director.

Earlier on Wednesday, fairy-tale femininity held forth as Valentino and Elie Saab both introduced elegant refined looks fit for a princess.

Breaking from the sharp-edged modernism seen the day before from the likes of Giorgio Armani and Stephane Rolland, both houses offered their most exclusive clients the most finely crafted examples of high fashion.

For Valentino, designers Maria Grazia Chiuri and Pierpaolo Piccioli kept the cutting simple for Cinderella-like dresses, gowns and coats that required hundreds of hours of embroidery and weaving.

At the Palais de Chaillot, Lebanese-born Saab stayed true to the classical lines that have made him a consistent favourite of red-carpet habitues from Hollywood to the Gulf.

There was a something of a 1920s glamour to his 41 looks — all dresses, apart from a couple of lace miniskirts — in tulle, chiffon and lace in shades of aquamarine, blush, blue and bronze.

Swarovsky crystals added sparkle to many of the outfits, and Saab clearly enjoyed playing with all kinds of options for bared backs that lent a discreet sense of drama to otherwise angelic silhouettes.

Notable among the front-row celebrities was Russian model and actress Anna Sherbinina, who turned up early with a most peculiar date — a doll dressed in Elie Saab style.

More VIPs were awaited for the evening launch of Saab’s first perfume, produced in partnership with Shiseido unit Beaute Prestige International, for sale in the United States, some European markets and Lebanon this month.