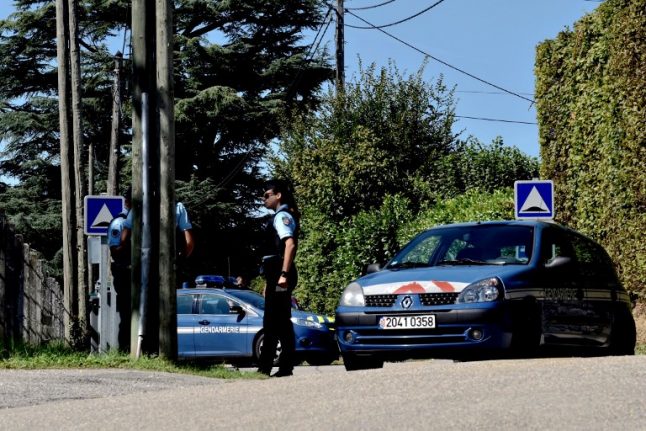 Photo: AFP
First the tips on how to avoid being burgled and then see below for what to do if you are the victim of thieves.
Invest in security
According to France’s National Institute for Security and Justice (INHESJ), security combinations such as an entry code system (Digicode) and an armoured door can reduce the chances of burglaries being successful by half in both houses and apartments.
A reinforced door can cost a pretty penny in France- approximately €3,000 according to LCI – but there are cheaper alternatives that can dissuade burglars just as well. If you live in a house, a motion sensor light and alarm in your garden or front porch will keep nervous intruders at bay and can cost as little as €60.
Burglary alarms start at around €350 and installing smash-proof windows costs between €200 and €400 per square metre.
The cheapest security measure available in France is perhaps a multipoint mechanical lock which is A2P certified, costing around €150.
“85 percent of burglars change their mind the moment they spot a security system,” Cédric Williamson, CEO of video surveillance company Kiwatch told L'Express.
READ ALSO: The parts of France where you are most (and least) likely to be burgled? Jewelry is the most stolen item during burglaries in France, the country’s Crime Observatory reported. Next in line are electronics (31 percent) and then money (29 percent).

We’re not suggesting you tuck your TV under the bed every time you leave the house but do try to find a discreet hidey-hole for smaller belongings of value. Inside a smelly sock, perhaps?

Seems like an obvious one, but how many of us share our holiday pics on social media while we’re still away from home? You may not have any potential burglars on Facebook but if you’re a regular Instagrammer and your profile isn’t private, every post of a piña colada on a far-away beach is bait for burglars. Well, don’t tell anyone you don’t really know that you’re off on holiday. Especially if they know your address or can find out without too much effort.

Call the cops before the burglary, not after

French police have actually had a programme to clamp down on burglaries during holiday periods since 1974. Dubbed the Tranquillité Vacances (tranquil holidays) operation, it sees local authorities keep a watchful eye on anyone’s home while they’re away. That’s if residents notify them beforehand, of course. Give your local police station a call, give them the dates you’ll be away and enjoy your holidays without a care in the world. Since it began, only 1 percent of homes registered on the Tranquillité Vacances scheme have been burgled.

If it hasn’t been long since your moved into your new pad, there’s little way of knowing if the previous tenants suffered a burglary, or worse still (wait for it), are burglars themselves. Jokes aside; investing in a new set of locks and keys that only you and your family/housemates have is certainly wise, even if you’re only planning on being away from home for a few hours.

Having your address written on your house keys isn’t wise in this day and age. Nor is keeping an extra set tucked under the doormat or under a plant pot; that’s the oldest trick in the book and burglars will love you for it.

If you live in a house don’t leave a ladder in the garden that thieves can use to climb in through a window with no lock upstairs. And don’t forget garden tools can take on a different use to break windows and force doors open.

Permanent marker the heck out of your belongings. It may deter burglars from taking it in the first place, or at the very least there’s much less of a chance they will be able to flog it if it’s “branded” as obviously not theirs. If you find this approach a bit too rustic, know there are companies that specialize in producing unique identification numbers for your belongings, printed on small stickers that are superglued to your devices.

Do a Home Alone and pretend an adult is at home

No need to go gung ho with the booby traps à la Kevin McCallister, but why not scare burglars off with a living room light on a timer, or a loud TV or radio that switches on for a few hours every night?

Thieves are constantly coming up with crafty ways to catch homeowners out – one of the latest tricks sees them stick a small twig in a door lock and retuning a few days later to see if it’s moved – so try planting a seed of doubt in their minds.

If they can watch you hang your washing up in your underpants, they can keep tabs on what’s happening while you’re away. While they’re at it, give them your plants to water. So it Get your neighbour to home sit for you
If you’re leaving your French home unattended for a while, why not woo your neighbour or friend into enjoying your Netflix account and Bordeaux wines while sitting in as a security guard chez toi?
If all your contacts are unavailable and you're going away for an extended period, try to find someone to at least collect your post. Nothing says “absent” like a letterbox packed to the brim.
Get a chien
Man’s best friend can often be a very effective security guard, especially if the prospect of being ripped apart by an irate canine is more dissuasive for burglars than any alarm.
Le Beauceron is France’s guard dog par excellence, a sheepdog that’s both fearless and smart.
Although there have been reports in France of burglars drugging dogs to quieten them. Photo: Sylvia/Flickr
Neighbourhood Watch on WhatsApp
If burglaries have become a problem in your area, invite your neighbours to join a WhatsApp group where everyone can comment on any suspicious characters they happen to see.
It may not prove as effective as having a private security firm intervening in burglaries while they happen, but the likelihood of spotting a burglar is higher if there are more prying eyes reporting directly to an instant-messaging service.

Do you live in a break-in hotspot?

Just because your home is in a sleepy little corner of France doesn’t mean you’re living in an area with no burglars.

In fact, several successive reports by France’s National Crime and Justice Observatory point to higher break-in rates in départements that are on the outskirts of Paris, Marseilles, Lyon and Toulouse than in the actual cities themselves.

Ile de France and the southern PACA region are France’s most targeted regions but many other areas of the country, both urban and rural, report alarming break-in rates.

Find out here if your department is one of the most sought-after by burglars and make the necessary plans to prevent a break-in.

READ ALSO: Where in France are you most (and least) likely to be burgled?

Burglars are rarely lone wolves and not always men in balaclavas
Even if a burglar is caught by police, chances are he or she is part of a larger organised crime syndicate, which means your neighbourhood is likely still at risk.
Last March, The Local reported on how a gang of teenage burglars, mostly girls, were behind 1,500 break-ins carried out in the south of France over a six-month period.
Don’t allow yourself to be the next burglary victim in your neighbourhood and protect your house with some of the suggestions above. So what should I do if my house in France gets burgled?
According to the latest findings by the National Institute for Security and Justice, only 56 percent of burglaries in France are reported to police.
So if you do get robbed, report it! Here’s what you should do:
Notify your closest police station or gendarmerie brigade as soon as possible by calling either 17 or 112. Remember to contact your bank to report credit or bank cards if they are stolen. Photo: AFP
If the burglars are still there, don’t take any unnecessary risks; instead try to collect information that can help police to identify them: number plate, vehicle type, language used, clothing, appearance…
Don’t touch anything until police arrive, especially doors and windows, as you or others may inadvertently damage fingerprints and other evidence.
File a complaint at your closest police station or gendarmerie brigade, in accordance with Article 5 of France’s National Police and Gendarmerie Charter. Remember to save time you do a preliminary report online to save time. You then just need to get it signed at your local police station.
Make sure you have some form of ID on you when you do and keep a receipt of your police report.
Make an inventory of all the items stolen.
If your property or belongings are insured, also put in a call to your insurance company as soon as you can.
Even if you have little faith they’ll find the culprit, you must file the complaint not least because you won't be able to claim insurance without doing so.
Rest assured that the information you provide police will be crosschecked with other Gelac units – France special anti-burglary division – increasing the chances of finding the culprit even if he’s half way across the country.
In départements like Cantal in south-central France, which was ranked as one of the safest areas for burglaries across l’Héxagone, Gelac’s work has proved invaluable in stopping serial burglars from wreaking havoc, France 3 reported last February.