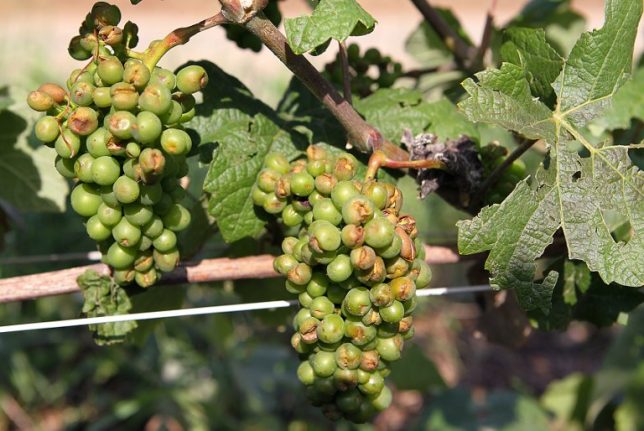 The northeastern Champagne region experienced four particularly heavy hail storms in late April and May just as the vines were beginning to flower.

“So far 1,800 hectares have been damaged of which 1,000 have been 100 percent destroyed, representing three percent of the total champagne-growing area,” the industry's Champagne Committee said.

But thanks to a system which allows champagne producers to mix new product with stocks from previous years, the weather damage is not expected to result in shortages of fizz. Damaged vines near Bordeaux following a violent storm in the region. Photo: AFP

Winemakers in the southwest have also been affected by torrential summer storms which have hit earlier this year than usual.

Pebble-sized hailstones destroyed 7,100 hectares of vines in the Bordeaux area and a further 10,000 hectares in Cognac last weekend.

Agriculture Minister Stephane Travert told parliament on Saturday that the government was looking into “what measures we can put in place and what support we can offer” to the wine industry. 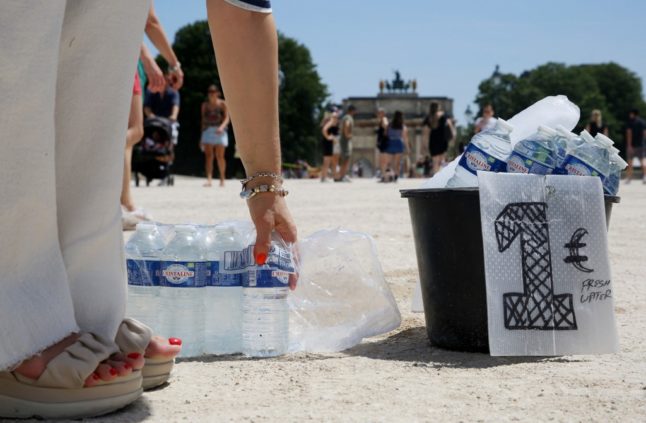 Regional climate experts warn the Paris region is on track to see average temperatures rise by 3C in a century “if greenhouse gas emissions of human activities are not stopped.”

And the Groupe régional d’expertise sur le changement climatique (Grec) in the Paris region of Île-de-France is now saying that average temperatures in the region will continue to rise at an accelerating rate.

That roughly means that the number of “heatwave” days recorded in the Paris region – when temperatures are above normal for that time of year – will rise from 7 annually to between 28 to 30 days each year by 2070.

Part of the problem is something known as the urban heat sink effect – in which large towns and cities stay warmer at night because buildings and even roads release heat at night, when it is cooler.

The study also warned that the area would be subject to devastating widespread flooding.

Nationally, temperature records tumbled last month. In Biarritz, on the southwest coast of France, the highest temperature ever – 42.9C – was recorded on June 18th. On the same day, Tarbes, in the Hautes-Pyrénées, and Rochefort Saint-Aignan, Charente-Maritime, also recorded their highest-ever temperatures since records began, while more than 150 towns and cities set new temperature records for the month of June.

During the same heatwave, 35C was recorded at the Orly-Athis-Mons weather station – which the Grec group uses for its observations in Île-de-France.

Grec climatologists said that high temperatures will become increasingly common in the region. Board members Robert Vautard and Nathalie de Noblet said in a statement that the same station has recorded similar temperatures in June just twice previously in 75 years – in 1947 and 2017.

They said the trend is for such temperatures to be reached more often in the years to come: “It is to be expected that this type of event will become more and more usual if the greenhouse gas emissions of human activities are not stopped,” they said, adding that – without climate change – high temperature records in the region would be about 2C lower.

The Grec report mirrors national and international studies. Shortly after the country’s last heatwave ended the director of France’s Centre National de Recherches Météorologiques said: “This heatwave is exceptional in terms of its precocity. This type of event in mid-June is extremely rare.”

But, while they are exceptional today, scientists predict they will be the standard within just a few years.  “Today, scientific knowledge on heatwaves is very clear. Any heatwave event is made more intense and severe by climate change … by the increase in temperature in the atmosphere resulting from greenhouse gas emissions.”

Only three years ago the highest temperature in France – 46C – was recorded in Verargues, Hérault, on June 28, 2019. The top 12 temperatures on record in France were set that day alone.

And a second heatwave this summer is already here. Forecasters are predicting temperatures could reach 40C in southeast France by Wednesday, July 6th, after temperatures got close to the mark on Sunday.

For a heat wave alert to be officially triggered, certain temperatures must be reached both during the day and at night for three days in a row. The trigger thresholds vary according to the area – the south of the country needs to be warmer than the north.

With global warming continuing, heatwaves will become increasingly frequent, according to climatologist Françoise Vimeux: “During the second half of the 19th century a heat wave occurred once every 50 years. Now it happens every 10 years – it will get worse.

“We are heading towards warming levels of 1.5 degrees, and so the probability [of a heatwave] will be once every five years.”

Météo France’s climate predictions indicate that, by 2050, the deadly heatwave of 2003 would be considered part of “a normal summer, even slightly cool”.

That was the summer in which 15,000 excess deaths were recorded in France, including 5,000 in Paris, and attributed to the heat. It prompted the government of the day to set up the emergency response programme that can be implemented today.