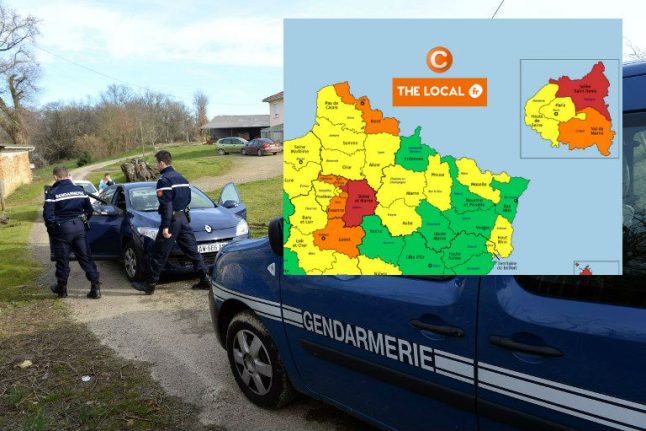 There was also roughly the same number of failed break-ins, taking the total of attempted and completed burglaries to 470,000.

That’s according to the French Interior Ministry’s yearly crime index figures, which The Local has obtained.

The stats also highlights that an unfortunate 30,000 properties were burgled more than once over the course of 2017.

But not all departments across l’Héxagone are affected equally. First we look at those areas that have the highest burglary rates, which we calculated by comparing the total number of burglaries to the number of homes in the department.

Where did most burglaries happen in France?

And there was a rather surprising name at the top of the table.

Haute-Garonne, in southwest France, was the department that experienced the highest number of burglaries per number of households in 2017: 8,972 out of a total of 679,242 households – meaning over 13 break-ins per 1,000 dwellings.

Haute-Garonne includes France’s fourth biggest city, Toulouse and stretches up to the Pyrenees mountains. It is popular with foreign residents with stats given to The Local revealing that some 6,000 English speakers live there, including nearly 4,000 Brits. Paris may have unexpectedly not made the top 10 – a total of 10,465 burglaries among its 1.46 million dwellings meant it had a rate of just under 8 burglaries per 1,000 homes.

But its Île-de-France neighbour Seine-Saint-Denis came in second on average for the departments with highest burglary rates in 2017, with 7,873 home break-ins in total.

Isère, a department in the Auvergne-Rhône-Alpes region (south eastern France) that includes the city of Grenoble, completes the podium for most break-ins per number of households with 7,567 in total.

Several departments in France’s Provence-Alpes-Cote d’Azur (PACA) region experienced some of the highest burglary rates in the country.

Bouches-du-Rhône, on the south coast, home to the country’s second biggest city (Marseille), was in fourth place after seeing a whopping 11,335 break-ins in 2017.

And rounding off the top five most targeted departments was the densely populated Rhône in central France where 1.8 million people live and where there were 9,856 break-ins.

Seine-et-Marne is Ile-de-France’s second most troubled department on average when it comes to home security. There were 6,321 break-ins in total which put the area into the sixth place on average.

In eighth place was the Vaucluse, in the Provence-Alpes-Côte d'Azur (PACA) region where there were just under 3,000 burglaries last year. The southern department of Gard, which has Nimes as its main city was ranked seventh overall after experiencing 4,138 burglaries in total.

In ninth place was the picturesque Tarn-et-Garonne in Occitanie, where the were around 10 burglaries per 1,000 homes – 1,267 in total.

And the only department from the very north of France that made the top 10 was Nord, which is a densely populated department close to the Belgian border. Nord, with over 1.1 million dwellings saw 11,580 break-ins  – the most registered by any department in France, just ahead of the Bouches-du-Rhône.

And just outside the top 10, there was another south department.

Alpes-Maritimes, which includes the Riviera resorts of Nice, Cannes and Monaco and is home to 6,000 Brits and 1,000 Americans. The department saw 7,300 burglaries last year, enough to see it ranked in 10th place overall for the most targeted departments.

Other Ile-de-France departments such as Val-de-Marne, Val-d'Oise and Essonne, don’t fare well either. These départements are experiencing roughly a quarter more burglaries on average than residents of Paris, where there were 10,465 break-ins in total last year.

Go further down for a full map of burglaries per department.

So which departments of France are (almost) burglar free?

Beautiful sea-swept Manche, in Normandy, where the picturesque Mont Saint-Michel lies, is the department where you least need to worry about burglars. In 2017, only 570 homes were broken into out of a total of 291,252.

Then the little-known department of Cantal in Auvergne-Rhône-Alpes (south central France) and Lozère in Occitanie, the second and third safest spots in France when it comes to home security.

Cantal reported only 232 burglaries and Lozère, half of which is the Cevennes National Park, saw just 157 – the lowest number of burglaries reported in all of the mainland departments in France.

Haute-Corse, the northern part of the island of Corsica, came in fourth for the number of break-ins per number of dwellings with just 351 burglaries in 2017.

Sandwiched between the two Corsican departments was Jura in the east. The department famed for its valleys, mountains and beach-fringed lakes had fewer than 3 break-ins per 1000 households – 415 in total.

Hautes-Alpes also made the top 10 least targeted departments and achieved the best results in Provence-Alpes-Cote d’Azur, a region with one of the highest average break-in rates in metropolitan France. There were only 411 break-ins in the department last year.

The western coastal department of Vendée, Mayenne in the same Pays de la Loire region and Calvados in Normandy are among the twelve safest departments in France on average when it comes to burglaries.

If you're using a computer, click here or on the map itself for a bigger version. How about the towns in France that are most targeted by burglars?

According to 2014 data the southern coastal town of Agde (an hour’s drive from Montpellier) was the break-in capital of France.

An average 18.6 residents per 1,000 were burgled in Agde that year. The average for its department, Hérault, is still above the nation avarage, with 2018 stats showing 8.7 burglaries per 1,000 households.

Other break-in hotspots were Aussillon in the Tarn department of southern France and Manosque in Alpes-de-Hautes-Provence.

CLICK HERE to find out if your town was among the 30 most targeted by burglars.

Are there more burglaries in rural areas than towns?

According to the figures The Local obtained rural areas including small villages saw an average of 5.3 break-ins per 1,000 homes in 2017.

However it dipped for the capital city Paris, falling down to 8.9 burglaries per 1,000 homes.

In other words there are more break-ins in large urban areas. This explains why on a regional level the regions worst hit by burglaries are Île-e-France wich includes Paris and the surrounding suburbs, Provence-Alpes-Côtes d'Azur, Occitanie, Rhône-Alpes, Hautes-de-France and Auvergne. These regions are home to most of France's main urban areas.

And rural regions of Corsica and Brittany have a low rate of burglary 2.9 and 4.32 respectively.

The map below shows the regions with he highest (dark blue) burglary rates and the least (light blue). Where are burglaries on the rise?

Seven out of France's 13 mainland regions saw rise in the number of break-ins last year including Brittany where the jump was particularly notable in the department of Îlle-et-Vilaine.

The south west region of Nouvelle Acquitaine also saw a steep rise particularly in Dordogne, where burglaries shot up by 22% and the department of Deux-Sevres.

Burglaries were also on the rise in the Bouches-du-Rhône the department with the highest rate and Haute-Corse in northern Corsica.

The map below shows the departments in orange, which have seen the biggest rise in break-ins (including Dordogne, Deux-Sevres and Ille-et-Vilaine in Brittany) Who is behind the burglaries?

In total police arrested 20, 800 people on suspucion of being behind the 250,000 break-ins in France last year. The vast majority where men, one quarter of those were under 18 and the rest under 30.

Burglaries in France are often blamed on crime gangs from abroad. While 74 percent of those arrested on suspicion of the crimes, 74 percent were French nationals, 11 percent from Africa and 11 percent from another European country.