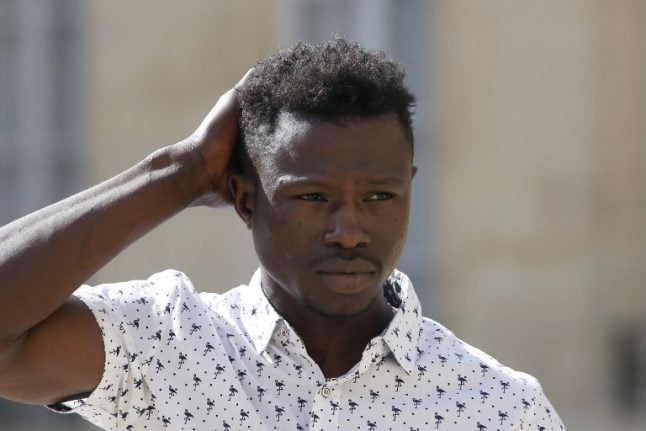 Gassama, 22, scaled four storeys of an apartment bloc in France on Saturday to rescue the four-year-old who was spotted dangling from a balcony. On
Tuesday, French authorities began the first steps towards making him a citizen in recognition of his bravery.
The boy's father, who had been living alone with him in Paris, had left him alone to go out to the shops and then remained on the street to play Pokemon Go, according to French investigators.
The boy's mother learned the news of the rescue on Reunion Island — the French Indian Ocean territory where she and the father were born and where she still lives.
READ ALSO: Photo: AFP
Reacting to Gassama's intervention on Antenne Reunion radio late Monday, the woman, who was not identified, said: “We can only thank him and thank heaven he was so reactive.”
She said French police phoned her to tell her the news. “Then I saw video on the internet. But I should not have watched it because you know it's your son in the video.”
Just half an hour earlier she had spoken to both father and son in a video call, she said.
“Things could have turned out much worse so I am relieved,” she said, adding that she was impatient to be reunited with her son and husband.

'Profound regret'
The boy's paternal grandmother, who also lives in Reunion, told RMC radio Tuesday that she was “very moved” by the images of the rescue and sent “huge
thanks” to Gassama.
“He's really a hero,” she said. “He did not stand by and watch, he saved my little sweetpea.”
Gassama, who had been living in France illegally since September 2017, arriving via the Mediterranean migrant route, told President Emmanuel Macron on Monday that he “did not think twice” before springing into action. Photo: AFP
The video of his rescue has been viewed millions of times online.
On Tuesday, he was to visit a fire station after being offered a job with the fire service.
The child's mother, who had planned on moving to Paris in June along with the couple's second child, aged one, is due to travel on France on Tuesday,
the BFM news channel reported.
The father, who was arrested on charges of neglecting his parental duties, was released from custody and reunited with his son on Monday under the
supervision of social services.
The mother said her husband, who is in his 30s, was “shaken” by the incident.
While saying she could not justify his actions she said “it could have happened to anyone”.
The Paris prosecutor's office said he had admitted his guilt and expressed “profound regret”.