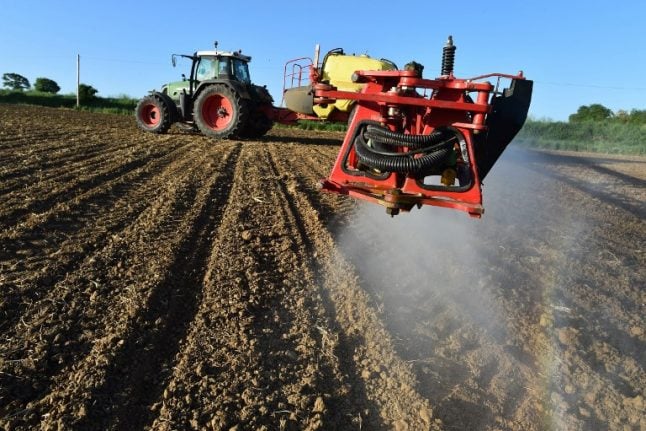 French farmer Nicolas Denieul pulverizes a glyphosate herbicide made by agrochemical giant Monsanto in Piace, northwestern France, in a field. Photo: AFP
The weedkiller, introduced in the 1970s by US agro-giant Monsanto under the brand name Roundup, is suspected by some scientists of causing cancer, with a 2015 WHO study determining it was “probably carcinogenic”.
Last November, a majority of EU member states voted to renew the licence for the product for five years but France had said it would ban use of the weedkiller within three years.
“The president's commitment to forbidding glyphosate within three years is clear,” government spokesman Benjamin Griveaux told Franceinfo radio Tuesday.
“We have said that we are going to work with everyone involved, that we will charge the INRA (National Agriculture Research Institute) with finding alternative solutions for glyphosate,” he said.
Lawmakers rejected late Monday amendments that would have given the pledge the force of law, though Griveaux rejected claims the government was ceding to pressure from farm lobbies.
“Have a little bit of confidence, don't always think that constraints, sanctions are the only ways of pursuing efficient public policies,” he said.
“(Environment Minister) Nicolas Hulot is working with all players and with INRA, and if we find industrial and scientific solutions allowing France to stop using glyphosate in three years, then everyone will have won,” he added.
Some lawmakers backed up the idea that this didn't mean that glyphosate wouldn't be banned in future.
The president “has set an ambitious and pragmatic goal” and “we put chance on our side” by pursuing further research on the alternatives, the Minister of Agriculture Stéphane Travert told the French press.
Other MPs suggested it was important to keep the country's farmers happy.
“To put it into law is to bring up old tensions,” said Jean-Baptiste Moreau an MP for Macron's La Republique En Marche party who is himself a farmer.
“At this point, let's inspire the trust” of the farmers, Moreau added. Photo: AFP
But some, including former presidential candidate for the Socialists, Benoit Hamon, have expressed their doubts over this, suggesting that the agro-chemical lobbies were too powerful.
“But who really rules?,” tweeted Hamon (see below). “The government abandons the commitment of Emmanuel Macron on the ban on #glyphosate within 3 years. Health has little weight when faced with the agro-chemical lobbies.”

Glyphosate is the active ingredient in one of the world's most widely used weedkillers, Roundup, produced by the US agro-chemicals giant Monsanto and it is the most commonly used weedkiller in France.
In November, the European Commission voted to extend the licence for the use of the chemical by five years.
After this decision, Macron tweeted that he had asked the French government to look for alternative pesticides and ban glyphosate in France within three years.
“I have asked the government to make the necessary arrangements so that the use of glyphosate is prohibited in France as soon as alternatives have been found, and at the latest within three years,” Macron said, via Twitter.
In September France's biggest farming union, the FNSEA, said that it was “out of the question” for the country to go it alone, worrying that a French ban could put them at a disadvantage against European competitors.
“A sudden ban, no — a path for reducing it and finding solutions, if the solutions are good economically and technically, we can see it happening,” said FNSEA chief Christiane Lambert.
French farmers blocking the Champs-Elysées avenue to protest against the French government's threatened ban on glyphosate in September accused president Emmanuel Macron of killing French farming.
“Mr Macron wants to be the the world's Mr Clean but he is the gravedigger of agriculture,” said Frédéric Arnoult, president of Young Farmers union.
“How can we want to sell the dream to the French of a healthy diet, while they take away our means of production?”, he asked.
Europe limited use of glyphosate in 2016 pending further research.
The EU's chemical agency said glyphosate should be not be classified as cancer-causing.
But this is challenged by scientists and environmentalists who point to a finding by the International Agency for Research on Cancer that glyphosate is “probably carcinogenic”.