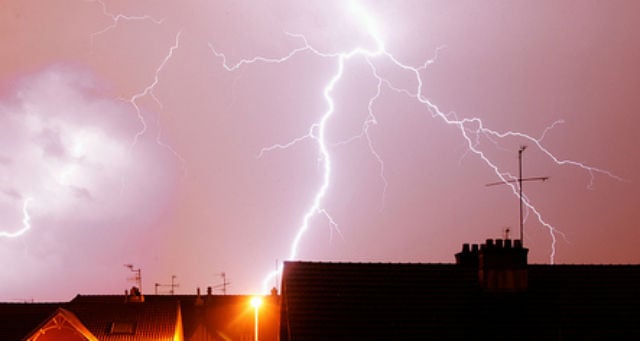 Thunderstorms are expected across much of the country on Monday, some of which could be accompanied by hail and strong winds and downpours, France's national weather agency Meteo France has said.

Weather forecasters are predicting there could be between 40mm and 50mm of rainfall in just an hour in certain areas.

In total, 32 departments have been placed on orange alert — the second highest warning — for storms, meaning people in those areas should remain very vigilant in case of dangerous conditions.

Northern France will be most affected however the national weather agency has warned that the storms could be strongest in the Pay de la Loire department in western France.

In Paris, the storms are set to hit in the afternoon.

The alerts will remain in place until 6 am on Tuesday morning, with some areas expected to be hit before 2 pm while the majority of the country will be hit by storms from 2 pm onwards. Originally just four departments had been placed on alert in western France: Deux-Sèvres, Vienne, Charente and Charente-Maritime however the warnings were extended on Monday morning.

Météo France warned that there would be a “storm situation requiring particular vigilance” with “rainy storms for short periods”.

On Saturday, heavy hail storms hit the west of the country and caused the death of a 6-year-old in Mayenne, as well as extensive damage to vineyards in Bordeaux.