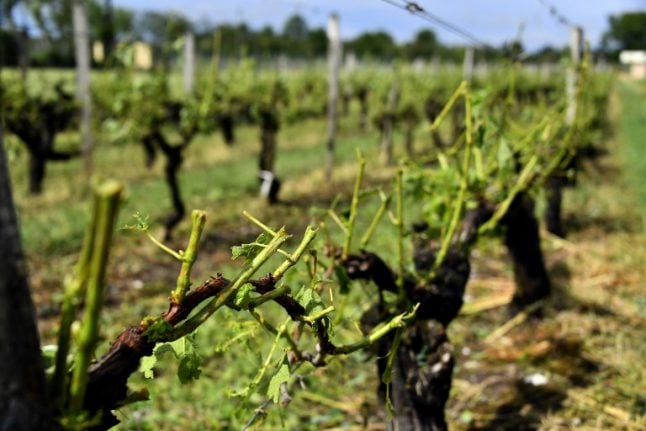 Vines damaged and without leaves at a vineyard near Bordeaux following a violent storm in the region. Photo: AFP
The bad weather struck around midday on Saturday in the Gironde area where many of France's most well-known red wines originate, as well as further north in the Charente and Charente-Maritime regions.

“It's a shock, it was a hailstorm of unprecedented violence for 10 minutes,” the head of a winegrowers association in the Cotes-de-Bourg area, Didier Gontier, told Franceinfo radio on Sunday. Photo: AFP
He said that an area of around 2,000 hectares had been affected which could bankrupt some growers, particularly those already affected by a late frost last year, he added.

The Côtes de Bourg, the Haut-Medoc and the Cotes de Blaye wine-growing areas were badly hit, local wine association the CIVB said, while vineyards used for cognac around the town of Jonzac were also damaged.
More details about the scale of the harm are expected early in the week. Photo: AFP
Agriculture Minister Stephane Travert told parliament on Saturday that the government was looking into “what measures we can put in place and what support we can offer” to the industry.